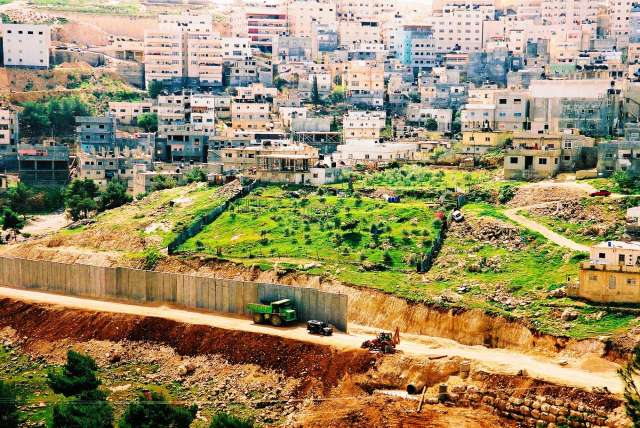 The construction of the separation barrier and the rapid growth of Israeli settlements are a major problem, but widespread Israeli opposition to a Palestinian state is at the root of what’s making a two-state solution unlikely. Credit: Creative Commons/Sarahtz.

For most of my adult life I believed that a majority of Israelis could be persuaded that their own interests required recognizing Palestinian Arabs’ right to national self-determination and equality. Therefore, I believed that establishing a Palestinian state alongside Israel was the most politically realistic way to achieve peace and security for both peoples.

The construction of the separation barrier and the rapid growth of Israeli settlements are a major problem, but widespread Israeli opposition to a Palestinian state is at the root of what’s making a two-state solution unlikely. Credit: Creative Commons/Sarahtz.

In recent years, however, I have come to realize that promoting a two-state solution to the conflict based on the Oslo process when no such solution is likely abets Israel in perpetuating the occupation of the West Bank and the Gaza Strip. Fostering the fiction that the Occupation is temporary allows people of good will to entertain illusions that a substantial proportion of the settlements and settlers will be evacuated. This fiction distracts us from the core reality on which we should be focusing: the concrete and ever-worsening conditions faced by Palestinians in the current moment.

This realization has made me doubt the value of gestures such as the October 2014 vote by the British House of Commons to approve a resolution to “recognize the state of Palestine alongside the state of Israel.” Although government and opposition members of parliament alike supported the measure, which passed 274 to 12, it was an exercise in political fantasy. Fewer than half of the 650 parliament members voted, as most Conservatives absented themselves from the vote. And in reality, the parliamentary resolution has no practical consequences because the resolution was nonbinding—it did not change government policy. Junior Foreign Office Minister for the Middle East Tobias Ellwood stated the Conservative government’s position: “The UK will bilaterally recognize a Palestinian state when we judge that it can best help bring about peace.” That is, the UK will recognize Palestine at some point in the distant future when the United States gives permission.

A more substantial reason for the resolution’s impotence is that a viable, contiguous Palestinian state with even limited attributes of sovereignty is now very unlikely to materialize. The international community and official U.S. policy nonetheless continue to uphold the creation of such a state as the only possible resolution of the Palestinian-Israeli conflict. The fiction that enough Israeli settlers will be evacuated to make this possible relies in part on calculations made by the Israeli government and Western media that separate Jerusalem, where about half of the roughly 700,000 settlers reside, from the West Bank.

Two weeks after the House of Commons vote, Sweden officially recognized the state of Palestine. Although this was a formal declaration of state policy, it had no more real consequences than the British parliament’s advisory resolution, and it had the same negative effects. By the time this is published, other European states may have followed suit.

These actions do underscore that last summer’s Israeli assault on the Gaza Strip, Operation Solid Cliff (more appealingly rendered in English as Protective Edge), shifted official and popular European opinion toward positions more sharply critical of Israeli government policies, although not necessarily critical of their underlying political dynamics. Speaking for Britain’s Conservative government, Ellwood pointedly noted that settlement construction makes it “hard for Israel’s friends to make the case that Israel is committed to peace.” Nonetheless, Europe will not challenge U.S. policy on Israel-Palestine.

The United States, for its part, despite its protracted record of failure (the 1993 Oslo Accords were negotiated behind the back of the administration of President Bill Clinton), continues to view itself as the “sole legitimate mediator” of the conflict and has always rejected European efforts to substantively influence the contours of a Palestinian-Israeli peace. The policy of every Democratic president since 1967 is that Israel should be cajoled, but not pressured, no matter how much Israeli prime ministers have personally exasperated them. Republican presidents Ronald Reagan and George H.W. Bush did exert minor pressures on Israel. But the presidency of George W. Bush and the ascendancy of the Tea Party excised that option from the Republican policy repertoire.

President Obama has repeatedly demonstrated that he does not have the political will to do what is necessary to bring about a two-state resolution to the conflict. Even though he apparently believes this would be a good thing in principle, Israel’s strategic value to the American empire and the campaign contributions of Israel-aligned donors are more important. The Democratic candidates who seek to succeed him are almost certain to come to the same conclusion. So, regardless of who wins the presidency in 2016, we can expect more of the same—happy talk about resuscitating the clinically dead “peace process,” but no Palestinian state. Those who continue to call on President Obama or Secretary of State John Kerry to encourage negotiations between the Palestinian Authority and the Israeli government are facilitating, perhaps unwittingly, the strategy of Prime Minister Benjamin Netanyahu and Defense Minister Moshe Ya’alon, who are seeking not to resolve but to manage the conflict while entrenching and expanding the settlement project.

How to Read the Rest of This Article

(To return to the Spring 2015 Table of Contents, click here.)

Joel Beinin is the Donald J. McLachlan Professor of History and Professor of Middle East History at Stanford University. Zachary Lockman, David Mandel, and Steven Zipperstein made helpful comments on an early draft of this article.

One thought on “Coexistence, Equality, and Universal Principles in Israel/Palestine: Regrouping in the Absence of a Two-State Solution”