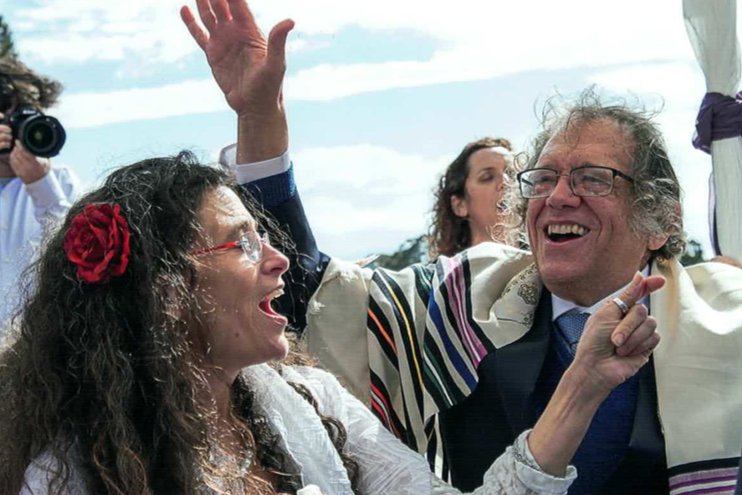 WHO IS RABBI MICHAEL LERNER?

Rabbi Lerner began his search for meaning in life at a young age and found a mentor and guide in Abraham Joshua Heschel, meeting him at the age of 12 and studying with him for over decades. Cornel West, professor of African American Studies at Harvard U. and author of Race Matters wrote: "Lerner is one of the most significant prophetic public intellectuals and spiritual leaders of our generation. Secular intellectuals and those who yearn for a major change in the direction of American society can learn a lot from reading his books." Rabbi Lerner’s legacy of political activism was launched in 1964 when he attended UC Berkeley. He walked past students sitting in protest, listened to their speeches, and joined their efforts quickly becoming a leader in the student movement. The failures of the social change movements of the 60s and 70s inspired him to study psychology to gain a deeper understanding of the psychodynamics of American society. Intellectual wisdom and curiosity as well as spiritual depth have always been the foundation of his work and efforts, giving rise to many articles, books, and ultimately, Tikkun magazine.

while pursuing a Ph.D. in Philosophy at U.C. Berkeley, was a member of the executive committee of the Free Speech Movement. He helped organize two major teach-ins: the first about the War in Vietnam, and the second to raise awareness among white people about racism and to support the newly-emerged Black Power movement. Read more . . .

After completing his second Ph.D. (in clinical and social psychology at the Wright Institute, Berkeley), Lerner founded the Institute for Labor and Mental Health, and became principal investigator of a major NIMH research project on stress at work and family life. In the course of that work, he and his colleagues uncovered the spiritual crisis in American society. Read more . . .

Mentored by Abraham Joshua Heschel at the Jewish Theological Seminary, Rabbi Lerner became controversial for his unwavering support of Palestinians and his insistence on seeing the humanity of both peoples in the Holy Land. Read more . . .

To help educate progressives around the world about the spiritual and

psychological needs that the Left often ignored and the Right addressed in a distorted fashion, Lerner founded Tikkun Magazine in 1986 and has authored many books, and lectured on college campuses around the U.S. including Harvard, Columbia, U. of Chicago, U. of Michigan, UCLA, U. of Washington, and dozens more. Read more . . .

We aim to expand public discourse beyond narrow reforms so as to honestly engage with and tackle the environmental, ethical, and spiritual crisis facing our world and envision and develop strategies to achieve a loving and just world in which people overcome utilitarian consciousness, treat one another as embodiments of the sacred, and respond to the universe with awe, wonder, and radical amazement. To learn more about what this entails and how to get there, click here.

In 2016, Rabbi Lerner received a call from Muhammad Ali's family asking that he speak at Ali's funeral. Prior to his death, Muhammad Ali orchestrated his funeral, including where it would be held and who he wanted to speak. Rabbi Lerner was included on this list because of his political courage and actions. Listen to his speech that "blew the roof off the stadium" and inspired and gave hope to millions of people around the world.

"Out of love for both Israelis and Palestinians as equal creations of God, Rabbi Lerner offers us the deepest way out of the bloody conflict - an approach that draws from a deep psychological and political understanding of the dynamics of the Middle East." - Avrum Burg, former speaker of the Knesset and interim President of the State of Israel

"The Left Hand of God is a rallying cry . . . a kind of handbook for creating a movement 'that can be for the Democrats and Greens what the Religious Right has been for the Republicans.'" ~ Boston Globe "Lerner is a rare voice of sanity and intelligence in a nation where our moral values have been corrupted by the greed of the market and the ambitions of empire." ~ Howard Zinn, author of "A People's History of the United States"

"Spirit Matters is a blueprint for the return of spiritual meaning to contemporary life, which may well save us. . ." - Larry Dossey, M.D. "Michael Lerner is one of American's most important spiritual teachers, a contemporary prophet . . . His rare and eloquent voice, going beyond left/right political dichotomies, will help progressives overcome their fear of spirituality and will challenge spiritual people to avoid the danger of narcissistic self-indulgence." - Rev. Jim Wallis, editor of Sojourners magazine

"Instead of relegating 'spirituality,' 'hope,' and 'meaning' to touchy-feelie group-therapy sessions, Michael Lerner shows us that these concepts should be the gut-level stuff of real politics - a politics that will rally ordinary workaday folks to join in building a genuinely progressive America in our lifetime." - Jim Hightower

"In an eloquent and spirited dialogue, Cornel West and Michael Lerner show that Blacks and Jews can transform the moral and cultural landscape of America, and are jointly central to America's ultimate redemption. This book should be required reading, not only for Blacks and Jews, but for all Americans." - Rabbi David Saperstein, director of the Religious Action Center for Reform Judaism

"As a Christian theologian, I rejoice in this vibrant and intelligent new voice of prophetic Judaism. It will appeal not only to those of [Lerner's] own faith but to all people of faith and to many who have given up on any faith at all. This splendid and readable book will take its place in the great traditions of the works of Martin Buber and Abraham Joshua Heschel." - Harvey Cox, professor of divinity, Harvard University "Jewish Renewal offers a major contribution to modern Jewish thought, a contribution that is a challenge to intellectuals even as it is accessible to a broad general audience." - David Biale, chair of Jewish studies, Graduate Theological Union, Berkeley

"This is a powerful and provocative book. Michael Lerner is a major progressive Jewish intellectual who has been an outspoken critic of conservatism in the American-Jewish community and of the Israeli occupation of the West Bank. His critique should not be dismissed as an attempt to set Israel above criticism or to conceal conservative interests in the Jewish world. Lerner's text goes far beyond the issue of anti-Semitism to put forward a creative and challenging interpretation of Jewish history and Jewish destiny." - Cornel West