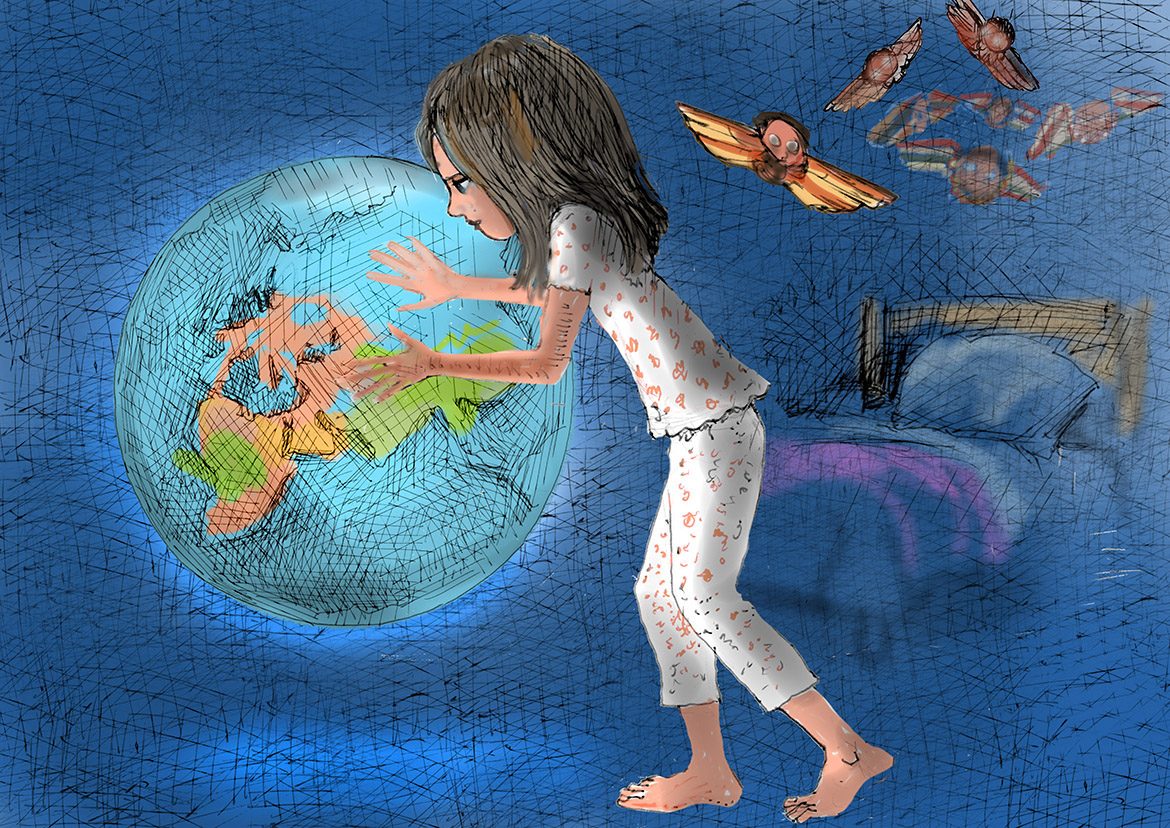 Planet Earth lit up, and so did I. The large globe, a present from my Uncle Gerald, stood in the corner of my room. An electric cord passed through the South Pole and disappeared into the deep magnum of the earth’s core. By pressing a round button on the floor, I could light up the world. It was a beautiful sight, especially when I turned off all the other lights in my room. The planet glowed warmly. So many colors, so many hues. All the blues, all the browns, all the greens. So beautiful. No fluffy white clouds of course, not over my planet.
My globe seemed to beckon me to touch it, to run my fingers over the uneven brown ridges: the Himalayas, the Alps, the Andes, the Pyrenees, the Atlas Mountains and all the others. And then trace the inverted bumps, the trenches of the ocean floor: the Marianas, the Kuril–Kamchatka, the Atacama, and others. My finger was drawn to the vast sandy colored patches that felt so smooth and flat: the Sahara desert, the Arabian desert, the Kalahari desert, the Gobi desert. I imagined how much sand was there and how many sandcastles I could build.   There were the deep, dark green expanses of the forests with all their multitudes of species: the Amazon, Central Africa, Canada, East Asia, Eastern Europe. Was it my imagination, or did my fingertip detect a pulse, the faint throb of life as it circled these regions? I noticed the whiteness of the Arctic cap. I stared at it for a long time. I leant over and licked the ice sheet and glaciers, feeling the coldness of being alone at the top of the world. I then ran my finger down the coastal regions where most of the world’s human population lives: the East Coast of the USA, then the West Coast; around to Japan; down to Australia; up to Europe and the boot of Italy; the tip of Africa. So much life.
And then it happened. Slowly at first, but with a gathering speed that overwhelmed me. A pain, no more than a slight discomfort, began in my tummy. I rubbed my belly through my pajamas, but it didn’t help. I breathed in and extended my stomach as much as I could, but the discomfort became a cramp, and then a spasm. Wow! My legs began to wobble. I was forced onto my knees. I could hardly breathe. Through the pain, I noticed that my heart was pounding as if I had been running. But I hadn’t been running. I’d just been sitting with you, my beautiful world. My eyes began to hurt from behind. My throat went dry, there was no spit in my mouth. I could feel little beads of sweat gathering on my brow. What was happening to me?   I stared at the globe in front of me. The beauty of the world, that great light, that blue/green/brown miracle, began to fade. How was that possible? As I watched, I saw to my horror that a black cloud seemed to envelop the globe, sweeping across its surface. I reached out and touched the darkened surface. It felt warm, even hot. Groaning. I heard groaning. Crying. I heard crying.   It seemed to come from the world herself. Or was it from me? My mind began to fog up. My stomach convulsed and I retched. This had never happened to me before, at least not since I was a baby. I stared in fascination, in horror, in disgust as my half-digested supper shot out of my mouth and covered my world. Through my watered-over eyes, I could glimpse bits of food, lumps of yellow and green stuff. My body heaved again. More food shot out. My nose and throat were burning. Sticky stuff ran down my pajamas. The smell was awful, making me want to throw up again. Again. And then again. How much had I eaten? What had I eaten? What was doing this to me? I could feel the life force draining away from inside me. My eyes began to close. No strength left. The last thing I remember was falling: falling, falling onto my beautiful globe now covered with my own stinking mess.