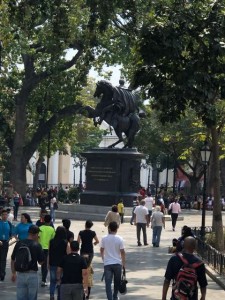 I just returned from 11 days in Venezuela, my sixth trip there since 2005.

Many people have asked me how they can understand what’s really happening in Venezuela based on information from public institutions such as the U.S. government and the mainstream media. Sources they have used include television ranging from Fox News to MSNBC and CNN; newspapers from the New York Times to more “progressive” publications; and radio from private ad-based to public listener-supported stations.

In order to analyze information today and in the future, there are three key points that most people in the United States and in Venezuela can agree on.

1 – No war. Even Venezuelans who did not vote for Nicolás Maduro do not want to be bombed or invaded. Ironically, the threat of military intervention has increased national pride and unity among Venezuelans. Many friends were worried for my safety and the safety of the 12-member delegation. After arriving I felt safer than I expected, and my main fear was about what the United States (my own country, that I love in so many ways) might do. Even in the U.S., most people do not want another Vietnam, or another Libya or Syria.

2 – End U.S. sanctions. Sanctions are a form of economic warfare. Sanctions kill, and children are primary victims. Food and medicines are greatly affected. Sanctions impede the ability of Venezuela – and other countries – to solve their own problems; and unilateral sanctions are out-of-line with the United Nations Charter.

3 – Respect other nations’ sovereignty. Both Venezuelans and people in the U.S. question the credibility of the U.S. government regarding its harsh critiques of Venezuela. The wealthiest country the world has ever known, the United States, has suffered from a growing gap between rich and poor, and from deteriorating schools, non-existent free neighborhood healthcare centers, infant mortality, high incarceration rates, and unjustified killings by police, along with questionable elections of public officials who could potentially solve those problems.

The answers to other questions were also revealed throughout my trip.

Why are the U.S. powers-that-be – both Republicans and Democrats – focused on Venezuela? The biggest reason is not oil. (Remember prior interference in non-oil-rich Cuba, Nicaragua, Haiti, Grenada, Chile, and others.) The problem is that Hugo Chávez was elected president in 1998, more than 20 years after the oil industry was nationalized in 1976, and he began to share the wealth with all Venezuelans, not just the already rich. Hugo Chávez led an electoral revolution and then he empowered Venezuelans through literacy programs, neighborhood healthcare centers, and a new constitution designed with citizen participation. Also, like the Venezuelan liberator Simón Bolívar 200 years before, Chávez spread empowerment across Latin America, and beyond, by creating institutions to counterbalance the enormous economic, cultural and political influence of the U.S.

Another disturbing reason is that because the U.S. still uses the obsolete, slavery-based Electoral College, neither Democrats nor Republicans want to alienate a group of swing voters in the swing state of Florida: upper-income Venezuelans who moved there and who organize with hard-line Cuban-Americans.

What was the most encouraging part of my trip to Venezuela? An increased appreciation of the strength of the Venezuelan people. They know from history, both recent and centuries ago, that they can prevail, and they are prevailing now. The self-proclaimed presidency of Juan Guaidó has not taken hold. The vast majority, even those who did not vote for him in May 2018, recognize that Nicolás Maduro is the legitimately elected President, and they know that most other countries – especially outside of North America and Europe – stand with them in recognizing Maduro’s administration. Which reminds me…

What are some key signs that predict U.S. intentions to interfere in a nation’s sovereignty? One sign is using the word “regime” rather than “presidency” or “administration.” Do we refer to Theresa May’s regime? Obama’s regime? Another key sign is using the term “humanitarian crisis” followed by offering “humanitarian aid” that even the International Red Cross and the United Nations recognized as politicized rather than helpful.

In closing, Venezuela is a sovereign nation whose people have experienced improved education, healthcare, and housing. Venezuelans have stayed strong, despite power outages and water shortages, despite sanctions and threats, all of which I experienced during the delegation. They want peace not war, an end to sanctions, and respect for their sovereignty so they have the means to address their own challenges.