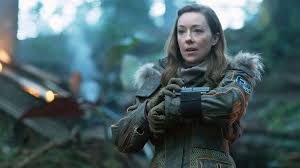 I’ve probably confessed before to both of the sins detailed in this essay, but if not, here they are: binge-watching and superstition. I do a lot of exercises every morning (possibly on account of superstition: I’m afraid that if I skip even a day, my back will seek revenge). I really like the benefits—but the thing itself, not so much. So I prop up my iPad near my exercise mat and binge-watch TV series that would be unlikely to claim my full attention at other times but work just fine to get me through my exercises.

For the last week or two, it’s been the Netflix remake of “Lost in Space.” The original series (which I didn’t watch) aired in the mid-60s and was itself a remake of the early 19th-century novel Swiss Family Robinson, about a shipwrecked family.

Even though I’m a bit of a sci-fi fan, I never watched the original “Lost in Space”—“Star Trek” seemed hipper and cooler at the time. But it was the holiday lull and I need to fill another half-hour of exercising, so I gave it a try. And got hooked. I’m halfway through the second season and still contemplating exactly why.

It was my birthday on Thursday. There’s part of me that still longs for the pony ride or whatever else I never had. I like birthdays to be a big deal. As is our custom, my husband and I had blocked out a couple of days of small adventures and delights: the birthday person gets whatever is desired on those days, a fun custom I heartedly recommend. But we woke up to piles of snow and snow kept falling all day. Birthday outings were postponed.

I was busy, though. My computer had died two days before—it went silent and black in the middle of writing an email—and the repair would cost too much given the computer’s age. I ordered a refurbished Mac and obsessed about minutiae: would I have to use the new operating system, would it be easy to migrate the data from my backup, when would I be reunited with what has become a kind of life-support system?

Data migration did not go well, even though I tried three different ways. I spent frustrating hours on the phone with customer support, once again realizing that for most tech companies, “customer support” means hanging out on hold while someone who knows less than you do looks things up in a database, then reads them to you. Since I keep a ton of data on my computer, each try took many hours. Just when I surrendered to inevitability, my iPhone froze on what is called “the white screen of death.” Google it: evidently everyone but me and the Apple support person I called has heard of this.

Each failure evoked the same response: I kvetched, cried a little, shook my fist heavenward, alternately praying and asking the universe why I had been singled out for this punishment on my birthday, then went back to googling solutions. I don’t actually believe in a providential father meting out personal rewards and punishments. My notion of the Divine is disembodied, ubiquitous, and above all mysterious. But when the going gets sticky, something in me reverts to a child’s-eye view, pure superstition. The kvetch sounds infantile even as I utter it: why me, why now? But still, I utter it.

Five minutes after I rehearsed my despair over the white screen of death and set about fixing the problem, I realized why I was hooked on the new remake of “Lost in Space.” The Robinson family has been updated with multiple ethnicities, new gender roles, a masterfully weaselly villain played by Parker Posey, the latest technological imagination, and a Mom and Dad who are pissed off at each other for long stretches. Everyone has a key role to play in the survival of the Robinson family, whose members are bound by something which is to ordinary loyalty as superglue is to library paste. But above all others the mother, played by Molly Parker, is the most masterful and indefatigable problem-solver. Believe me, she could turn her simultaneously desperate and serene gaze on your run-of-the-mill rocket scientist and in half a minute that person would be backing away, saying, “Forget it, I’m no rocket scientist.”

I’m definitely no rocket scientist, but all at once I realized that Mission Commander Maureen Robinson is something like my lifelong role-model. I tend to have the idea that everything can be fixed, something that has both made me a powerful problem-solver in my own worlds and kept me trying past the point of reason to fix things that can never be mended. Performing my morning exercises to the unfolding story of a spaceship being turned into a sailing vessel and saved from plunging headlong into an icy sea of something toxic—well, you get the picture, and that’s just one incident out of dozens. Whining a little, shaking my fist at the universe, then getting back down to business, all true to type.

My husband came up in a horribly abusive household. Not long after I met him, he told me that every shrink he’d seen had asked why he wasn’t dead or in jail. His answer? “Ozzie and Harriet.” He meant that early TV series had given him a model of family so deeply different from his own, it had implanted the idea that another life was possible, and he had held onto that ever since. I remember “Ozzie and Harriet,” but it had been other programs that had done the same for me, sitting transfixed before the little black-and-white TV watching familial love and parental wisdom overcome all as the crazed otherness and violent emotions of my multigenerational immigrant household swirled around me. Now we criticize these programs, and with cause: threaded through with WASP superiority and complacency, exuding entitlement and self-regard, leaving everyone else outside, faces pressed against the window hoping to get a closer look at how things were supposed to be.

Realizing that Mission Commander Maureen Robinson embodied the relentless optimism and can-do attitude I’d adopted all those years ago made me a little sad too. It had been good, it had gotten me out of a lot of messes that had defeated others in my family and beyond. The sadness was because right now, I’m not so sure. In a few days my computer stuff will have sorted itself out, I have little doubt. I expect I’ll get one of those birthday days soon. But the Robinsons had to go into space in the first place because the Earth has become nearly unlivable for reasons not entirely clear: an asteroid crash, the breakdown of civil authority, alien attacks, Maureen’s issues with her husband…. Maureen gets the family off Earth and into a mission to colonize Alpha Centauri, but almost immediately their ships are attacked, a wormhole carries them away, and however often they feel found, they are soon lost again.

I’m not as intrepid and can-do as I used to be. As I gaze around, it seems that almost none of us are. It may be that as so often happens on “Lost in Space,” the technologies conceived to solve human problems create ever-more difficult ones, until can-do just can’t anymore. Or perhaps the underlying message will prevail: valuing each other, collaborating and sacrificing for the greater good, accepting mutual and personal responsibility—these things will carry us through. I suppose an end to over-confidence is wise. I’m starting this year knowing that while not everything can be fixed, it is not given to us to know which things can. Like Commander Maureen Robinson and all the heroes and heroines of every TV series that formed some aspect of our consciousness, we need to whine a little, shake our fists at the universe, and just keep trying.