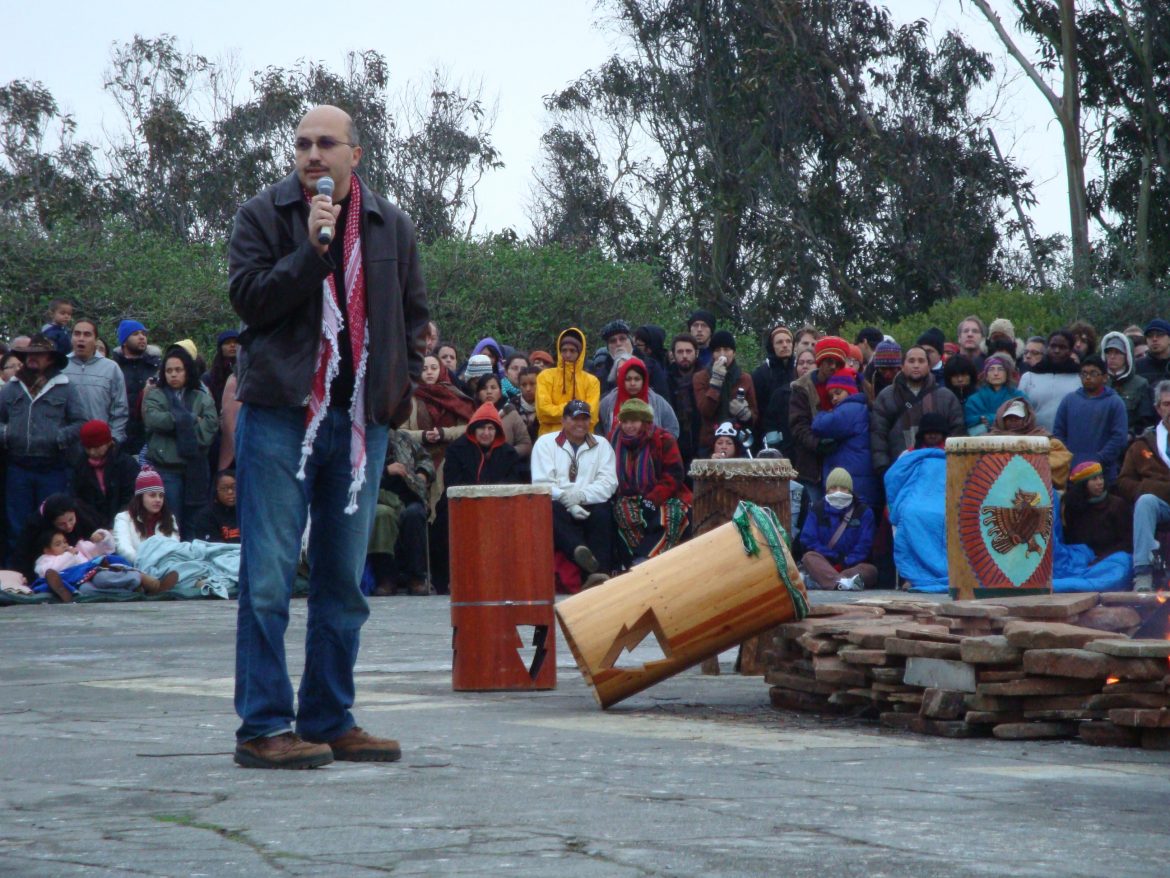 In September of 1979, I landed in Berkeley straight from the Sinai, cloaked in a light blue Bedouin Jalabiyya embroidered in my favorite color purple, a gift from my Dahab adopting family. My untamed curly hair was woven, Bedouin girly style, into four braids.

I knew very little about US non-Christian holidays. I was shocked to discover that Christian holidays actually had more to do with consumerism than they did with worship, and that Hanukkah, rather benign back home, was a major Jewish holiday to compete with Christmas. Soon enough, Thanksgiving arrived. Learning about this holiday was the first crack in my idealized notion of America.

“So, this might resemble the idea behind Israel’s independence day,” I said to my advisor, the venerable Elizabeth Colson. “Celebrating the dispossession of the indigenous people from land, language, and culture.”

“Yup” she nodded in her Minnesotan minimalism. Both Professor Lizzy and her buddy Bill Shack, who took over advising me the next year, recommended that I attend Unthanksgiving Day, otherwise known as Indigenous Peoples Sunrise Ceremony. This ritual has taken place each year commemorating the 1969-1971 repatriation of Alcatraz that ended with a police crackdown.

I didn’t have a car back then, and lived in campus' International House. I got two of my floormates, one from Senegal and the other from Egypt, interested in attending. We split the cab fare to cross the bridge and lined up at the San Francisco pier’s ferry terminal around 4 am.

Those days, Native American culture was yet to become in vogue, and this meant short lines for the ferry. About 300 or so people attended, mostly those who took part in the Alcatraz repatriation and Miwok, Kashaya, and Pomo families from the rancherias of the North Bay. I was deeply moved. Memories of my student days at Hebrew University,1976-79 crept into my mind. What a chicken I was, hid away in the Sinai rather than travelling up north to join my comrades in the Palestinian Land Day marches. I was afraid the police would shoot me, or, if arrested, my parents wouldn’t have enough to pay the bail.

Back from Alcatraz and off from the ferry we walked uphill to North Beach’s Cafe Trieste, a holdover from the 1960s Beat Generation still abuzz with writers and artists. We all knew its reputation even before we arrived at Berkeley, as it attracted counterculture types who rejected the rigid poetic standards of the time. Even Yehuda Amichai, considered Israel’s greatest modernist psalmist, wrote a poem about the cafe and how its poets broke the rhyming poetic beat.

I then had my first Thanksgiving meal with the host family assigned to me by the Berkeley office for foreign students. I didn’t know them well back then, so I didn’t inform them of my pre-dawn journey to Alcatraz. This was my first experience with baked turkey (back then I only knew it as the main ingredient in shawarma), cranberry sauce, and pumpkin pie.

I began to understand the significance of this secular holiday, seeing stores and businesses close. Prior to landing in the US, I thought that their Sundays will be like our Shabbats. But I was found wrong. Only on Thanksgiving and Christmas Days did the urban din quiet down. I became acutely aware of the disconnect between what the holiday historically marks and the warm tidings of family and friendship it generates. Just like the way my Mizrahi buddies and I get together on Independence Day to do `Al HaEsh (“on the fire”, Hebrew), fanning the coals of our barbecued steaks and drinking beer in Israel’s public parks.

Through the years the ceremony expanded. With the 1980s came the New Agers who made Indians a fad. To be on the island pre-dawn for the ceremony’s beginning we had to leave home at 2am and stand in lines with a couple thousand people. When this fad went away, they were replaced by anti-colonial young Bay Area activists who would later form the hard core of the Occupy Movement. Through the years, Filipinx indigenous dancers, Japanese Ainu leaders and Aztec Dancers have joined and become part of the ritual.

From 1992 Quincentennial on, there has been an official Palestinian representation among the indigenous people coming from all over the world to participate in the ceremony – with a flag and a keynote. Some years, however, I noted their official absence. “Pressure was enacted by the SF-Bay Area Jewish community leadership, and it’s not wise to pick fights with them,” cautioned one of my AIM (American Indian Movement) friends.

The ritual always ends with AIM organizers handing everyone tobacco to offer up in the central fire as they make a wish. “G-d, please, have mommy buy me a tricycle,” a three-year old Shaheen prayed, tossing his offering into the flames. He got it the next day on Black Friday.

From 1979, when we are in the U.S., it has become our tradition to attend the Unthanksgiving sunrise ritual and then have coffee at the Trieste, followed by a couple hour nap before having our Mizrahi-Palestinian Thanksgiving dinner – `Al HaEsh lamb chops and mujaddara.

But not this year.

There is no doubt we are living in strange and anxious times. COVID-times. Our “new normal” is antiseptic and isolated. I had a socially distant Thanksgiving feast with a Mizrahi old friend. Lentil soup, baked leg of lamb – so Middle Eastern. We mixed some wild rice into the white rice with pine nuts and sumac to get into the American holiday spirit.

Smadar Lavie is a Professor Emerita of Anthropology at the University of California, Davis. She authored The Poetics of Military Occupation (UC Press, 1990), receiving the 1990 Honorable Mention of the Victor Turner Award for Ethnographic Writing, and Wrapped in the Flag of Israel: Mizrahi Single Mothers and Bureaucratic Torture (Berghahn 2014, Nebraska UP 2018) receiving the 2015 Honorable Mention of the Association of Middle East Women's Studies Book Competition and finalist in the 2015 Clifford Geertz Book Competition of the Society for the Anthropology of Religion. Lavie won the American Studies Association's 2009 Gloria Anzaldúa Prize and in 2013, she received the “Heart at East” Honor Plaque for lifetime service to Mizraḥi communities in Israel-Palestine. Her present research focuses on the relationship between left-leaning Mizrahi feminism, Israel’s ultranationalism, and the Palestine-Israel conflict.