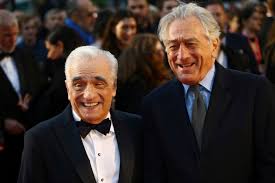 My custom is to avoid mentioning the Present Occupant of the White House by name. One main reason is that he worships his own name; why help that along by repeating it? Another is that contradictions Trump has brought to a head were not of his own making, rather having been cultivated over centuries by those who preceded him in boundless greed and vicious uncaring. Why give him all the credit? But this time, the name is not to be avoided. My apologies.

This is from an interview with Robert De Niro in the New York Times:

The president is supposed to set an example of trying to do the right thing. Not be a nasty little bitch. Because that’s what he is. He’s a petulant little punk. There’s not one thing that I see in him or his family, not any redeeming qualities. They’re out on the take. It’s like a gangster family.

In this interview the Trump family was a natural segue for De Niro from Martin Scorsese’s latest gangster epic, The Irishman on Netflix. My husband and I watched it this weekend: three and one-half hours that never felt long. De Niro plays a teamster who gets drawn into mob life through a powerful fixer with union connections (Joe Pesci); and who winds up as one of Jimmy Hoffa’s (Al Pacino) closest confidantes and allies.

This is not a piece of film criticism. Let us stipulate that some people didn’t like the CGI alteration of the senior actors’ faces. It didn’t much bother me. Some people have argued with the history the film portrayed. But no one knows precisely what happened. I was definitely bothered by the fact that almost none of the female characters had substantive lines—The Irishman definitely would have failed The Bechdel Test. I thought the opening tracking shot and others like it, which take the viewer instantly and deeply into another time and world, were amazing. And some of the performances equally so.

The Irishman came just on time to shine a bright light on the impeachment vote slated to happen this week. The film gave me a degree of insight into Donald Trump I hadn’t quite experienced before, despite watching, reading, and ruminating endlessly.

The mob-boss characters in The Irishman utterly lack ethics. Not just a sense of ethics, an ethical position, but an evident lack of awareness that ethics are even a thing. Their elaborate, complicated lives are shaped by power, loyalty, and greed.

Each presides over a network of relationships conditioned on Machiavelli’s axiom that for a prince, it is better to be feared than loved (something I’ve written about repeatedly), as love can be withdrawn but fear has staying power. For those who are loyal and obedient, fear is lubricated with gifts and declarations of love. But fear comes first.

Each man’s life is a monument to appetite. Each pursues total control over his domain: “This is my union,” Hoffa says repeatedly. Each resents and sets out to destroy anyone who threatens their power and ownership.

Each man says and does whatever seems necessary to pacify those who might oppose him, doling out small benevolences to smooth the way for large acts of self-serving evil. And each man is successful to the degree that he is allowed to live and continue heaping up power until he gets in the way of someone more powerful.

The only difference between Donald Trump and these self-serving mob bosses and fixers is the scale of his ambitions. Most of that is down to Trump getting a head-start from his family’s money, but like the bosses portrayed in The Irishman, he’s also gotten a boost from a raft of smart and unscrupulous lawyers, greedy bankers, and ranks of factotums slobbering after crumbs from the big man’s table.

Fear keeps men like this in power, to be sure: people are fearful of speaking out because they’ve seen the consequences, the bloodied corpses of fatal disobedience. But more than that, it’s hope. The hope of a reward, the hope that translates into credulity at the comforting falsehoods and baseless promises of a gang boss or our national Thief in Chief, the hope that while others will pay to satisfy the boss’s greed, you will benefit.

In The Irishman, politics is just another racket. That’s what it is to Trump, obviously, lying with impugnity to whomever he can scam, using the presidency to enrich himself and his family. There’s nothing new here—quite possibly it’s all been clear to you from the first. But more than anything else I’ve seen or read, Scorsese showed me how it is possible to normalize being absolutely devoid of ethical or moral principles and absolutely aligned with self-interest.

In a 20-minute conversation between Scorsese and his stars, you can see how the actors inhabit the characters they play, reaching for—and attaining—something approaching true empathy. De Niro says at one point, “It’s a classic story about loyalty, about brotherhood, and betrayal. But betrayal for a reason people can understand.” “Necessity,” says Scorsese.

Imaginative empathy is about as powerful a substance as can exist: it can open a window on truth and just as easily rationalize lies. In the Times piece, the interviewer asks De Niro if he could find his way into the character of President Trump. “I wouldn’t want to play him,” replies De Niro, an actor who has just immersed himself in the role of man who will assassinate an erstwhile friend as a favor to his boss as easily as you or I might loan someone a dollar. “He’s such an awful person. There’s nothing redeemable about him, and I never say that about any character.”

I have to hand it to Trump. This has been a stupendous con, taking in millions who should be able to spot this amoral excrescence as easily as they might a thief whose hand was in their pockets. We are living in the world of The Irishman. In the filmed conversation, Pacino says, “This is about our world, our America.” Scorsese adds that “it happens to play out in the context or organized crime…but that’s just the context.”

We have the opportunity change the story. Will we use it?

“Remembrance” by Robbie Robertson, the song that ends the film.