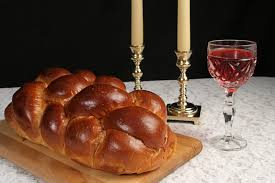 Challah, candles, and wine for Shabbos—but no kitten!

I learned something new Friday night.

Once a month, my husband and I have Shabbos dinner with a few friends. We bless, eat, and talk about something somehow related to the Torah portion for the week or to the cycle of Jewish holidays. Whomever hosts gets to choose the topic. Having made our ways through the long cycle of the High Holy Days—the soul inventories, the forgiveness, reorientation, prayer and fasting—our hosts chose joy.

When it was my turn to talk, I started with an oy, though. A couple of weeks ago, I sprained my ankle rather badly. The way I did it unnerved me. I was sitting at my easel painting, so intent on what I was doing that I hadn't noticed my foot had fallen asleep. I stood up without thinking. My foot instantly gave way, buckling under me, sending both me and my chair sprawling on the floor. That meant a few collateral aches and twinges, but worst was the ankle, which swelled up and turned a remarkable shade of puce. I did all the right things: elevation, pressure, ice, and so on, and by now, it's much, much better.

But a week ago, I was really tired of the whole thing. This past Friday night, I recounted to my friends that I had plopped into bed and told my husband how much my ankle, my knee, and my foot had been hurting. That after a week of doing all I could to make it better I was still hurting so much was news to him, alarming news, triggering a set of questions: had I broken something? Where exactly did it hurt and how? How long had this been going on?

You see, I'm not much of a complainer. In fact, after a lifetime of training to be the opposite—strong, self-sufficient, unneedy, and far more disposed to care for others than myself—my approach to aches and pains tends to be grin and bear them.

My husband and I talked about the family roots of my stoicism, how I had been brought up to serve others' needs at the expense of my own. How much easier it is for me to extend help than to ask for it. My husband knew this. The new part was my saying that while I wanted to try to be more forthcoming in asking for help, his inviting me more often to say how I was feeling would enable us to meet halfway.

Telling this story at the table Friday night, I could feel my friends' attention, their anticipation of the part when oy turns to joy. I obliged. "That's when he turned to me," I said, "and told me 'I want to take care of you.'"

Instantly and simultaneously, the three other women at the table cooed, "Awwwwh," in exactly the tone of voice one might use if a kitten had suddenly materialized in the center of the Shabbos table and begun chasing its tiny tail.

That's when I realized that my challenge might not be so much an individual as a generational one. You see, my friends and I came up in the thick of second-wave feminism, in a period marked by extreme reaction to what had come before. Ultra-important issues came to life: reproductive choice, equal pay, and many more, setting in motion the actions that would begin to address gender inequity and injustice, still not resolved fifty years later.

But in a framework that understood the personal as political, every ordinary word and deed had also become fraught with political meaning. I lived in a commune and was criticized by housemates for being in relationship with a man, as if desire were a simple question of political correctness. I knew women who had forbidden themselves to use the word "girl," so that, for example, the phrase, "my friend's daughter and other sixth-grade women" was normalized. Some women displayed outrage at having a door opened for them or being offered a seat on a crowded bus, interpreting the gesture as a hostile reminder that they were perceived as weak and incapable. There was an expectation that we should all learn to fix cars and dicey plumbing rather than rely on men.

The men I knew, fellow progressive activists who'd also dedicated their energies to righting social wrongs, were intimidated. They didn't want to be ostracized from the company of women. They feared putting a foot wrong lest they become targets of the next crit/self-crit session, where things could get really intense. If offering help were interpreted as an attack on women's competence, independence, and ability, it might be best not to offer at all. And so certain patterns were set in place. In my own case, they reinforced my early training to avoid showing weakness or asking for help.

Things have changed, of course. I never did learn to fix cars, but I did get better at locating repair shops where women were treated with respect and information was forthcoming without condescension. Room for the give-and-take has expanded.

But when the women chorused "Awwwh!" Friday night, all the men laughed in surprise. They knew something had happened, but not precisely what. They had glimpsed a secret, I explained. The secret desire of women of my generation to be cared for, coddled sometimes, looked after with love. What we want is not the caring that comes with a tinge of incapability, nor the over-dependence, the straitjacketed gender roles we fled from in the sixties. What we want is what we give: noticing a temporary weakness or challenge without making the person suffering from it feel less than in any way; pouring out love and help without a stingy sense of quid pro quo; allowing ourselves to receive just as we gladly encourage loved ones to receive from ourselves.

And how much do we want it? I wish you could have heard those "Awwwhs."

We are lucky to be partnered with men who heard and understood that message on Friday night, who share our desire to be freed from the limitations fed by coming up in a time of great change. Perhaps you know someone who ought to hear it now.

"Isn't It A Pity," sung by the great Bettye LaVette.