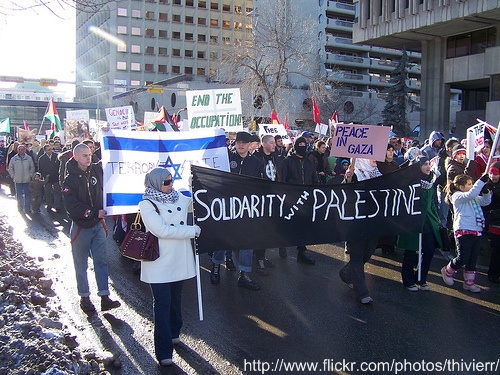 The memes began appearing on our Facebook feeds within minutes of the video of George Floyd’s brutal murder by Minneapolis police officer Derek Chauvin. All had the same theme. On one side, Chauvin with his knee on Floyd. On the other, an Israeli soldier with his knee on any one of thousands of Palestinians who have experienced the same treatment. The point was clear: The United States and Israel are not merely defined by histories of violence and oppression but share an ongoing presence of state sanctioned police violence against everyone outside the dominant group.

But an even more striking similarity emerged as anti-police violence protests exploded across the United States. In the U.S., Black Lives Matter organizers started calling on white allies to come to the front of the protests as “white shields” against police violence, a familiar practice to anyone who's participated in solidarity protests against the Occupation.

In both situations, placing phenotypically "white" people at the front of the line has aimed not merely to prevent violence, but to witness it, in the most profound sense of the term.

Like Central American solidarity activists before them, Palestinians have long called upon Israeli and international activists to witness the Occupation and its impact on their daily lives. This has never meant merely “observing,” but rather participating actively in resisting the violent Israeli expropriation of their land and the physical as well as structural violence from which they relentlessly suffer.

In frontline villages and neighborhoods in the West Bank and East Jerusalem, such as Bil’in, Nabi Saleh and Sheikh Jarrah, witnessing involved coming to weekly protests that generally ran according to the same script. Protesters would march towards or gather at a disputed area of land declared off-limits by Israeli forces and, once in place, would start a sit-in or chanting. Often International and Israeli activists would march to the front to protect Palestinians, but just as often Palestinians would ask them to stay back, knowing that once the protests began Israeli forces would attack everyone – Palestinians, Israelis and internationals – with similar levels of violence. Indeed, over the years, hundreds of Israeli and international activists have been seriously injured and even killed at solidarity protests, sometimes from the same cardioid neck restraint that killed George Floyd.

Despite the risks, people continued to come from Israel and across the world to witness firsthand the brutality of the Occupation. Why, you might ask, would someone voluntarily make themselves so vulnerable? Because occupying and even crossing over the white line between oppressive police violence and Palestinian lives provided an opportunity to experience fear and suffering that were otherwise, literally, beyond comprehension.

The weekly solidarity protests were usually followed by a communal meal, and when possible, a night spent at the homes of Palestinians. These meals offered the chance for our witness-function to take form as we shared and came to understand the experiences of the violence we'd all witnessed and of the courage and tenacity of Palestinians who endured it every day of their lives; and perhaps most important, to envision a new identity that transcends the parochial ethnic and religious divisions that are at the heart of the current protests. “Here there are no Israelis, Palestinians, Jews or Muslims, Americans – we are all human,” a Palestinian host declared to his guests, Palestinians, Israelis and internationals alike, as we ate a delicious meal prepared by his family after a particularly violent Israeli attack.

This was not a pollyannaish call to intercommunal brotherhood, but rather a reminder that to be fully human we must become fully engaged in the long, hard and often dangerous struggle to ensure that everyone – Palestinian and Jew, white and black – enjoys the same human, political, and civil rights. Moreover, what can be termed the witness-function had the effect on Palestinians whose experiences we witnessed of enabling greater trust and solidarity than normally occurred when the innumerable “observers” and “delegations” visited for short meetings with local leaders before returning to the “safety” of Tel Aviv or Jerusalem.

Simply put, there’s no going back to one’s previous state of ignorance or apathy once you've been tear-gassed, shot at, and threatened (and even afflicted) with worse by one of the world’s most powerful militaries. That was, of course, the whole point, that we would return home and tell the world what we had experienced. Indeed, returnees from solidarity trips are far more effective when speaking to Jewish and other Americans about the Occupation precisely because the experiences we share were too powerful and unimpeachably real to be easily ignored, challenged or deflected.

Today signs across the United States are repeatedly pointing out that “white silence is deadly.” But as with the Occupation, speaking is no longer enough (and in fact, it never was). As happened in Palestine, the participation of white and other non-African Americans on the front lines of the Black Lives Matter protests is clearly raising their political stakes and forcing more honest and consequential conversations. The question is, how long will "white" Americans be willing to sacrifice for their black and brown neighbors, especially if protests actually compel a fundamental change in the system that has suckled, protected and blinded those with the narrow-minded privilege to identify as white for the entire history of the Republic?

In Palestine, the bonds forged not merely by marching and suffering together, but also by sharing the same food and the same homes, however briefly, helped produce deeper and more personal bonds that continue even though the protests were crushed. Can real solidarity for a long-term struggle emerge here without a similar level of interpersonal connections being forged?

And even if such solidarity continues, the greater the attention generated by the participation of large numbers of white Americans in protests the more urgent will become the need to shut them down by increasingly repressive means. This is indeed what happened in the Occupied Territories by 2017, when Israel so ramped up the violence against all protesters, as well as local Palestinians that it was no longer possible to continue most of the solidarity protests.

President Trump and Attorney General Barr no doubt hope for a similar outcome with blusterous threats, flashy National Guard deployments, low-flying helicopters and violent police responses. And now, with his popularity waning even further, Trump is arrogating to himself the right to imprison protesters who attack statues for 10 years and encouraging mass violence. But America’s streets are not yet occupied territory, and these actions have only further enraged white, black and brown citizens alike, who've flooded streets from Washington D.C. to rural America to demand a long-overdue national reckoning about this country’s tragically unabated history of anti-Black oppression and violence.

There is finally momentum, and the more Americans that witness this emerging reality the more likely we might come together as a nation to create a society worthy of its ideals. But as in the last great era of civil rights struggle, a lot more Americans of every persuasion are going to pay a very high price before such a future can arrive.

About Mark LeVine and Bryan Reynolds

Mark LeVine, one of Tikkun's longest-serving Editorial Board members, Professor of Middle Eastern history at UC Irvine and a 2020-21 Guggenheim Fellow. Bryan Reynolds is Chancellor’s Professor and Claire Trevor Professor of Drama at UC Irvine. They are authors of the forthcoming Art Beyond the Edge: Creativity and Conflict in Africa, the Middle East and South Asia (UC Press).

One thought on “The Privilege to Witness”