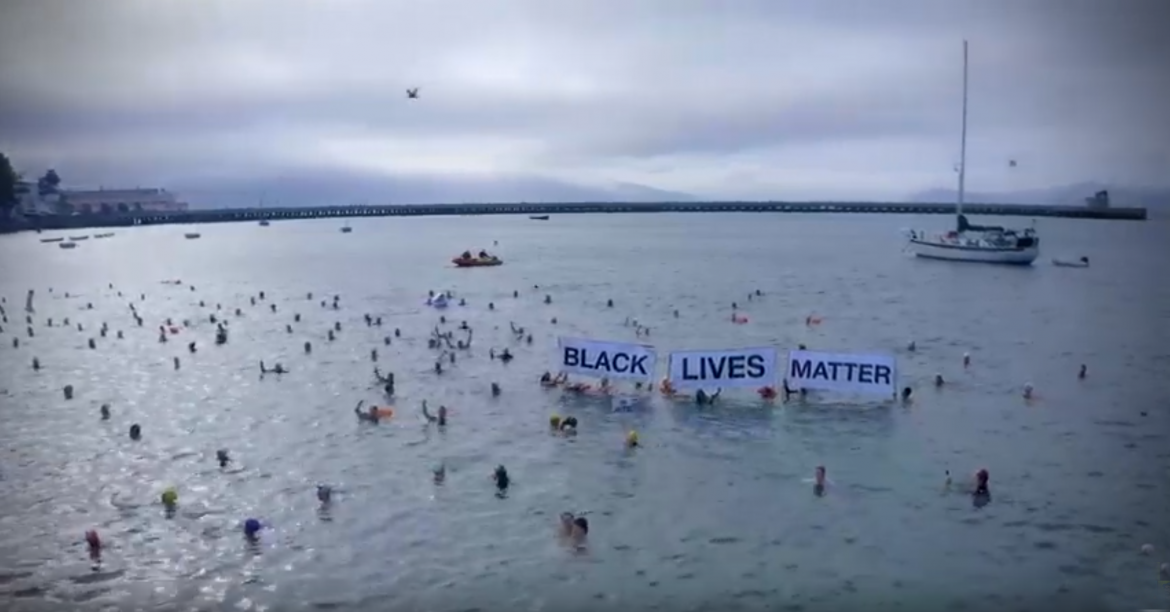 Fifteen minutes into my swim, I start to question the wisdom of this experiment. I'm bucking a flood tide, stippled with goosebumps, my toes are numb, and I'm all alone in this remote patch of the San Francisco Bay. I could die of hypothermia and no one would know. What was I thinking?

Quarantine made me do it.

For nearly half a century I've swum three times a week, the last 15 years with the Cal Aquatic Masters team. Swimming keeps my body fit and my spirits buoyant. Communing in the locker room after workout is prime social time. When the shutdown hit, and pools didn't make the cut as an essential service, all three pillars of my well-being evaporated at once. I compensated with long walks, and dreamed of improving my butterfly.

Many of my teammates are hard-core open water swimmers. Listening to their tales of racing from Alcatraz, dodging sea lions, and crossing the Golden Gate, I all but weep with envy. Though I haven’t braved the bay’s frosty whitecaps in ages, at 64 I still think of myself as the invincible young woman who could bodysurf in 50° water clad only in a bikini bottom (it was the 70s.) But decades of autoimmune disease have diminished my capacities along with my tolerance for the cold.

After six weeks in dry-dock, I’m accustomed to epic grocery store lines, hot sweaty masks, bad hair, and disinformation— even the absence of physical touch and my beloved karaoke. But life without swimming is really asking too much and my lats are aching to engage.

A late spring heatwave blasts the Bay Area and I hear the bay is a balmy 60°. That's 20° below pool temperature, and nearly 40° colder than my bare flesh. I shiver and pull up the covers just thinking about it. But desperation is a powerful motivator and it propels me to a nearby regional park that's remained open during the pandemic. The park includes a speck of beach which serves as a launchpad for bay swimmers. Standing in the shallows adjusting my goggles I wonder if I can even last one minute out there.

The first rule of swimming in the wild is: don't go out alone, especially in unfamiliar waters. But I'm cocky. I grew up bodysurfing the gnarly breaks at San Francisco's Ocean Beach. I've taken off on waves in Morocco, Costa Rica, Hawaii, and Southern California’s most notorious ride, the Wedge. So… a little ol’ bay cove? Surely I can handle that! Plus, the science on social distance swimming isn't definitive, so better to do this, like everything else these days, alone.

I wade in up to my waist, take a deep breath, and erupt in a freestyling frenzy, as if I could pummel the cold into submission. Within five minutes, to my complete surprise, I've acclimated. I swim north, with the current, comfortable enough now to take in the spectacular view of Angel Island and the gentle hills of the Marin headlands; in the cleft between them the north tower of the Golden Gate Bridge floats above lush billowing fog. I flip onto my back and gaze at the unblinking sky. For the first time in months I am free.

A swaying forest of eelgrass engulfs me at the end of a second cove. I'm losing body heat fast so it’s time to head back. Swimming against the tide is much harder going. I measure my progress by watching landmarks on the shoreline. But every time I look up there's the same section of beach. I have the sensation I'm swimming in place. Teetering on the edge of panic, I crank into high gear and sprint all the way back. Given my age, afflictions, and paucity of insulating body fat, I consider 20 minutes in the bay without a wetsuit a triumph of near-Olympian proportions. Move over, Diana Nyad!

I lie on the hot sand to thaw out, just like I did as a child. Heat penetrates my skin, radiating through muscle, into my bones. For a few precious moments, life is good, and I warm to the notion that maybe a better world really is possible.

Walking back to my car I'm surging with aliveness. When was the last time I did something I didn't think I could do? It dawns on me that I haven't challenged myself physically in a very long time — I haven't dared. For several decades all my challenges were those forced upon me by my errant immune system. Eight surgeries attempting to undo the damage done to my bones and connective tissues. Countless rounds of physical therapy and rehabilitation. Years of gastrointestinal mayhem and life-threatening weight loss. Understandably then, I've coddled myself. A big ask of a person who craves intensity, who always wants to do more, push harder. I’ve learned the hard way that running aggressive energy triggers my immune system to act out, so I've trained myself to move more slowly and gently through the world. And when I do, my flares are fewer and less intense.

A week after my debut in the bay I set out to swim a mile. The wind is up, the swells muscular, heaving me about in a rough dance that demands my full attention. I’m rolling to the rhythm of the moon, in tune with the vast oceanic pulse. I've escaped the world of pandemics and masks, conspiracy theories and Trump — all swept away in the endless swirling current.

At the half-mile point, I'm greeted by a cormorant sunning her wings atop a piling. I float on my back, held in the arms of the sea. An ancient sun warms my face. Angel Island rises before me, anchored in the same place for over a million years, and this is as close as I've ever been to the eternal.

I'm going out several times a week now, gaining skill and confidence. I even swam during a small craft advisory warning — and me, the smallest of crafts, in swells so big it was like body surfing down the troughs. But while I'm having the time of my life, the virus continues to kill people, devastate economies, and inspire new feats of evil by our deranged president.

Barely a month after I first took the plunge, the world is upended anew after yet another unarmed black man is killed by a white officer of the law. I want to show up for Black Lives Matter, put my body where my politics are, but I'm afraid, afraid of teargas and batons, rubber bullets and, hanging over everything, a deadly virus.

A few days later, while I’m hiking in a different park, a rattlesnake issues a warning from a thicket of poison oak. Though California has been rattlesnake country far longer than it's been the domain of humans, I’ve been exploring trails in the Golden State most of my life and it wasn’t until five years ago that I first saw one —reared up, rattling, and poised to strike. Instinct immobilized me long enough to burn that image into my memory. I watched the pit viper uncoil at a teasingly slow pace before gliding silently into the tall grass. Since then I’ve had three more amygdala-revving encounters. And still I hike. More alert than ever to the path before me. This one is narrow as I am, canyon drop-off to my left, venomous fangs to my right. Concealed in the foliage, I can't see the threat but its sound is unmistakable. I freeze until the rattling stops and (I gamble) it’s safe to pass.

Life without risks is limited indeed. Having taken on the bay, I’m stronger than I was a few months ago, not as fragile as I used to be. Within a week I've joined with thousands of protesters marching through downtown Berkeley, every one of us wearing a mask. I’m brimming with joy, so grateful to be one drop in a sea of people committed to justice for all. Swimming in the wild gave me the courage to follow my heart …to the streets.

Two weeks later my politics and passions merge in the much colder waters of San Francisco's Aquatic Park where the Dolphin Club and the South End Rowing Club have organized a solidarity event. Some 200 of us swim into the cove, raise banners, chant and cheer and say their names. As a white person in a predominately white sport I am proud to stand with my Black brothers and sisters—here in the same ocean that gave birth to us all.

After the event concludes I swim a sloppy half mile, my arms laden with cold. I could have made my political point and rushed back to my cozy car with its blasting heater, but since I’m already wet why not get in some yardage?  Approaching the quarter-mile buoy I feel the current ripping me away from my destination. I look up to get my bearings just in time to see I'm on a collision course with a massive concrete pier. Adrenaline floods my body fueling a last-chance pivot. I make the buoy and navigate back to the beach without involving a rescue chopper. Emerging from the water I'm wobbly, disoriented, can barely speak —  the closest I've ever been to hypothermia. Small price to pay for swimming on the right side of history.

Lisa Martinovic is a Berkeley based writer and performer whose work explores the intersection of neuroplasticity and addiction at www.Slaminatrix.com.