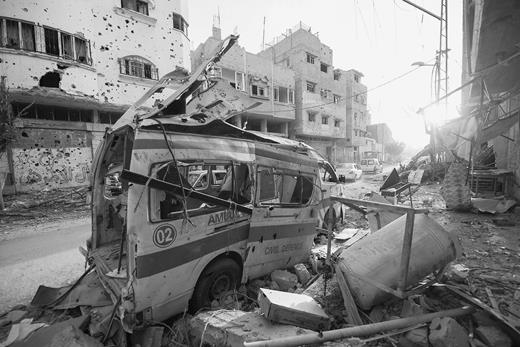 Creative Commons/Boris Niehaus An ambulance lies in the rubble of the Shuja’iyya neighborhood of Gaza following Israeli attacks in summer 2014. Gazans have yet to recover from the Israeli airstrikes on their hospitals, homes, and schools.

It’s been a year since Israel’s massive incursion into Gaza. The horrendous costs of that war are still being lived by the people of Gaza, who have not received substantial help in rebuilding from Israel or the West. It’s hard to know what could be done for the families of the 2,800 Gazans who were killed by the Israeli assault, or for the more than 10,000 who were injured. But what certainly should have been done by now is a complete rebuilding of all the apartment buildings, homes, schools, and hospitals that the Israeli Defense Forces destroyed. As we approach the Jewish High Holidays this September, it’s time for Jews and Americans who supported the Israeli assault to begin a process of repentance for their failure to repair the damage they caused.

How the War Began

Let’s consider first how that war started. The Palestinian Authority entered into negotiations with Israel in 2013 under protest, because Israel was refusing to agree to a halt in West Bank expansion of settlements (which was part of what these negotiations were supposed to be about). The Palestinian Authority agreed, though skeptical of the sincerity of Israel’s intent to end the struggle and create an economically and politically viable Palestinian state. But since Netanyahu professed in public his commitment to a two-state solution, and Obama and Kerry naïvely believed him, the Palestinian leaders agreed to participate in a new round of negotiations led by U.S. Secretary of State John Kerry who had gotten Israel to agree to a specific schedule for releasing long-held Palestinians who were arrested while resisting the Occupation. But in spring 2014, when the time came for Israel to let the last and most important group of prisoners out, Israel refused to live up to its own agreement.

What must have been particularly upsetting to Netanyahu and his right-wing coalition was that Hamas seemed to be willing to let the Palestinian Authority work out an agreement with Israel. Hamas leaders explained that they would not formally endorse the agreement themselves but would participate in a Palestinian government that would endorse an agreement. Hamas leaders said they would accept such an agreement as a hudna (ceasefire), which they could live with even while still asserting that Palestinians had a right to all of Palestine. This way, Hamas would have a way of explaining to its own people that it had not given up the struggle for the full liberation of Palestine. But in reality, the participation of Hamas in a government led by the Palestinian Authority would have necessitated a total suspension of the armed struggle.

How to Read the Rest of This Article

(To return to the Summer 2015 Table of Contents, click here.)