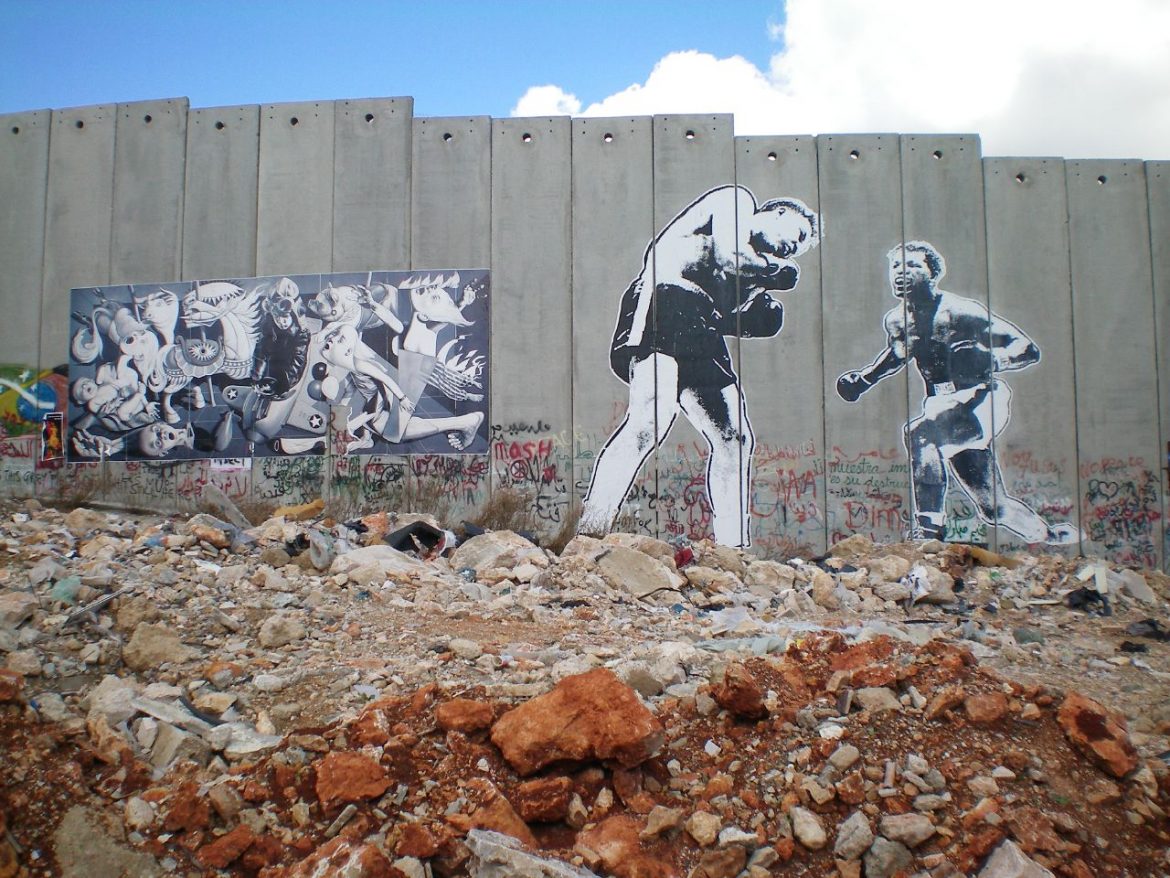 Imagine 8 peaceful initiatives where human reason supplants anger, fear, and anxiety and turns down the flame on that cauldron of hate, retribution and vengeance.

In this fantasy world there is a black hole where all these emotional manias get sucked away. Along with them, intractable territorial imperatives of us-versus-them just fall, dissolve, and disintegrate too. And so too do evangelical God-given injunctions requiring death to all infidels, intruders, and apostates. The black hole swallows all of it up. The next morning the fog of war is lifted, and on this singularly clear day, the first in three generations, you can almost see forever. As John Lennon counseled:

(1) Iran shocks the world and suddenly refuses to supply Hamas and Hezbollah with weaponry or missiles. Both entities are systematically disarmed, and Iran's resolve is not just rhetorical. It has teeth because its declaration is willingly supervised by both the UN and Israel. In addition Iran returns to the nuclear accord and to top things off, amazes the world a second time by establishing diplomatic relations with Israel. What happens as a consequence, of course, is that all U.S. and UN sanctions against Iran are lifted immediately.  The economy booms. Iranians rejoice.  But that´s just the beginning.

(2) Israel, caught off guard by these happy vicissitudes, decides to follow the lead with unprecedented reciprocity further astonishing the world by announcing it actually does possess nuclear weapons and will willingly submit to UN inspections and limit its nuclear arsenal to only 40 devices. And in another magnanimous gesture, especially directed toward Iran, it agrees to remove all nuclear weapons from the waters off Iran´s coast which are currently positioned on submarines.

With just these two miraculous gestures  Israelis are able to relax knowing Hamas and Hezbollah are not going to bother them anymore, and Iranians can sit back with a Hookah and a long-forgotten sense of security that they will not be blown to bits by an Israeli nuclear weapon any time soon.

(3) But another surprise awaits:  Gaza's borders are fully opened as electricity and water come under the complete control and supervision of Gazan authorities for the first time. Contiguous passage is guaranteed for all Gazans to the West Bank without having to pass through any Israeli checkpoints in the process. Israel enthusiastically begins construction for this secure ingress and egress route. Costly, yes, but not impossible and far less expensive than the 440-mile wall Israel built to separate it from the Palestinians. West Bank Palestinians rejoice that they can finally go to the beach! The only weapons found in Gaza are what police forces need in any major city in the world. No more rockets, tunnels, or explosive devices of any kind, thank you very much. All achieved by UN, U.S., and Israeli inspection protocols willing accepted by Gazans and Hamas in return for iron-clad promises of peace and, most of all, prosperity.

(4) Israel's guarantees have teeth too. They substantially contribute to the reconstruction of Gazan buildings that have been destroyed and immediately begin to build the long-awaited Gazan International Airport. Israel works with the Emirates and Saudi Arabia to establish industrial zones for rapid economic development in Gaza.  The 50 percent unemployment rate among Gazan youth falls precipitously.  Israel lifts its blockade too, and the UN replaces Israel in supervising incoming ships to Gaza for weaponry.  Gaza fishermen are allowed unlimited access to the Mediterranean. Hospitals have medicine. Children frolic on the beach with their parents, and there are no Israeli drones or jets flying over their heads threatening them.

(5) In addition, Israel's generosity extends to building a corridor from Jordan to Jerusalem so that Muslims from all over the world can worship at the Al Aqsa mosque without any need to secure an Israeli visa to enter. The need to “liberate” the holy site will be gone, and Al Aqsa brigades across the Middle East will suddenly find themselves without willing martyrs because Al Aqsa will already have been liberated.  Elon Musk is drafted to build a hyperloop from Jordan to the very foot of the Temple Mount where Muslims may enter and worship, and Israel´s security system does not have to worry about the influx, since none will be off wandering the streets of Jerusalem but simply arriving at the Temple Mount and then returning to Jordan in Musk´s futuristic carriages.

(6) The Palestinian Authority will have a contiguous area in the West Bank free from all Israeli checkpoints, and it too will only have weapons that normal police forces have in major cities. The Authority along with Hamas will secure all areas of the West Bank and Gaza arresting any and all terrorist threats to Israel or themselves. In return Israel will assist in developing West Bank housing, infrastructure, and create industrial zones for rapid economic development in the area. Palestinians will gasp in surprise as they see grateful Israelis building housing and settlements for them for the first time.Yes, Palestinian settlements being built by Israel on the West Bank!

(7) Israel, in turn, will respect the airspace of Gaza and the West Bank, but the Palestinian Authority & Hamas as a gesture of reciprocity will not develop Air Forces other than commercial traffic in their areas. No more Israeli jets or drones flying over West Bank cities either.

(8) In Syria, in the meantime, the U.S., Russia, and Iran, fully moved by this unprecedented wave of reciprocity, similarly shock the world and work together for the first time, to help re-establish Assad's control over all of the country in return for promises that all chemical weapons will be destroyed, all terrorist groups eliminated, and that Assad will sign a peace treaty with Israel and establish diplomatic relations—leaving the issue of the Golan Heights up for future negotiation. Refugees from all across Europe rejoice that they can return home while reconstruction aid from the U.S., Israel, Russia, Saudi Arabia and the EU pour in to rebuild the country.

Of course there will be shrill voices shouting “Never!” or “Never Again!” or “Never with these traitors and polytheists!”

But let us round out the fantasy by turning down the volume on that monotonous, entrenched shouting of which we are all too familiar. Instead think that maybe it might be possible for Israeli and Palestinian fathers, mothers, children and families to live out their lives in peace. All it takes, really, is a dollop of rationality, a degree of forgiveness, a bit of give-and-take, and a measure of courage to take chance on something new.

It could all be achieved. And it could be achieved rapidly in just a few years.

A generation of children on both sides of this divide could grow up secure, happy, and fulfilled in that part of the world. And no one has to give up their religion to do it either.

Reason is a higher faculty of our species.  And so is trust.

But that would just kind of give us what we have now.

Why not “think different” as Steve Jobs opined and let us all join hands with his fellow hippie, John Lennon, and give peace a chance.

Jerry Kroth, Ph.D., is an Associate Professor Emeritus from Santa Clara University and may be contacted through his website at collectivepsych.com.