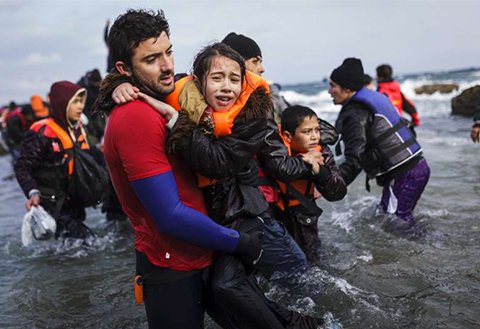 A volunteer life-guard helps a young girl out of the sea after the boat she used along with her family and other Afghan refugees to cross part of the Aegean from the coast of Turkey to Lesbos towards the end of 2015 crashed on a rock off the island’s coast.

The terrible conundrum of contemporary politics is that everyone is responding to more or less the same forces, but in ways too radically different to be reconciled.

Take immigration. Around the globe, people are on the move, many having been forced from their homes by conflicts in their regions or economic and humanitarian crises (e.g., four million Venezuelans have fled their homeland). Approximately three million refugees have settled in the U.S. since 1980—about 22,500 in fiscal 2018. Globally, a record 70.8 million people—one out of every 108 on the planet—were displaced in 2018, according to a new report from the UN. Half are children.

The International Rescue Committee reports that with the U.S. taking the lead (the present administration cut refugee admissions by one-third), worldwide refugee resettlement slots have been reduced by half.

These things are known. Some people take them as reason to support a strongman who promises to save them from the rampaging hordes. Others as reason to act with compassion, extending welcome and help.

The way I see it, the house is burning (literally: unchecked, climate crisis will create many more refugees) and instead of rescuing the occupants, most of the world is barricading the doors, having decided that the suffering of others is a small price to pay for their own well-being. I’ve heard this story before, of course: you can read here about the fate of Jewish refugees escaping the Holocaust. As you read, know that this story is not unique in the annals of NIMBY history.

What is to be done? It’s becoming clear that now is the time to engage that question, before history settles it for us.

I’ve been listening to a five-part series of the New York Times podcast “The Daily,” focusing on last month’s European Parliament elections, notably the nationalist parties and movements that have broken what once seemed a consensus in favor of a united Europe. Katrin Bennhold, the Times‘ Berlin bureau chief, herself born in Germany, is the lead reporter. What she learned set me to thinking.

Bennhold interviews candidates and voters in France, Italy, Poland, and Germany. In Italy, she focuses on the extreme-right League Party. Its slogan is “Italy First: Common Sense in Europe,” and a primary plank of its platform is opposition to immigration. With the League having received more than one-third of the vote in the European Parliament election, the party’s leader, Interior Minister Matteo Salvini, is considered well-positioned to push for a national election and thus rise to Prime Minister.

In Germany, Bennhold concentrates on the extreme-right party, “Alternative for Germany (AFD),” Germany’s third-largest party, also radically opposed to immigration. AFD received two million votes in the 2015 European Parliament elections, double that in 2019. In recent history, Germany has been the world’s second largest immigration destination after the United States. A linchpin of the AFD approach has been denouncing Angela Merkel’s decision to admit a million refugees and immigrants in 2015, when the European Union’s asylum system crashed in the face of unprecedented demand. This theme seems to be evergreen, as it is in the U.S., even though current immigration to both this country and Europe have declined.

In the podcast series, immigrants are repeatedly denounced for corrupting the purity of national culture, taking jobs from citizens, bringing crime and objectionable behaviors—a litany that will be familiar to anyone who’s been listening to the Present Occupant of the White House. The blame for each nation’s significant economic and social woes is laid on these newcomers, who are charged with the crime of being not-Italian, not-German. Or not-French: Marine Le Pen, head of that country’s extreme-right National Front, now renamed “National Rally,” announced that after winning the most French votes in the European Parliament election, she would spearhead the creation of “Identity and Democracy,” a new pan-European far-right coalition.

Meanwhile, the Greens are on the rise, now considered Germany’s leading political party. You can read about their policy positions here. Suffice it to say here that in the face of the same economic and social challenges animating the far-right parties, the Greens support a positive approach to immigration, human rights, energy and environment, and oppose right-wing extremism—the opposite of most of the parties profiled in the Times‘ podcast series.

Both tendencies are on the rise in civil discourse and elections, as they arguably may be here in the U.S., as we saw with the recent election of Alexandria Ocasio-Cortez and other progressive candidates. Which tendency will prevail?

In the final episode, Bennhold says, “I don’t think we have a Europe problem. I think we have a democracy problem. For a lot of people we met, liberal democracy, it’s just not delivering anymore. These values that the EU was founded on, they’re just not making sense anymore in a lot of people’s lives….” She cites people whose salaries stagnate, who don’t feel at home in their towns, the Jewish restaurateur attacked by neo-nazis who notes, “Democracy isn’t permanent. Nobody every said it was….how can we be so sure that democracy will survive?”

Listening made me think about what democracy means to me. Everyone interviewed in the series is running or voting in a democratic election, many for parties which, if elected, plan to bring about an end to immigration. I often use the word “democracy” to mean “equity,” “fairness,” and “participation.” “Cultural democracy” to me means pluralism, participation, and equity in cultural life and cultural development. “Economic democracy” means everyone is entitled to a stake in economic decision and policy-making. Both notions of democracy incorporate limitations on the accumulation of power via privilege and protections for those lacking privilege.

In contrast, this podcast series makes the point that to the right, democracy means majority rule, period. No conditions, no foundational values, no promises to protect people who voted against you.

Both models are clearly in contention in U.S. elections. The candidate for re-election as President just launched his campaign with a rally that played on precisely the same resentments and injuries targeted by the European right-wingers.

To me, then, this is the most important question, and I want to put it not as a neutral one, but in personal terms: will democracy continue devolving to the crudest winner-take-all contest, or will those for whom human rights and democracy are inseparable prevail?

I was impressed by an international 2016 study of attitudes toward democracy which, if accurate, suggests that a surprisingly large proportion of younger people really don’t care which way the question is answered. Changing that outcome feels more important than I can say.

“Soldier of Love” by Sade.