When I learned of the death of Diahann Carroll (October 4, 2019), I immediately thought about her last scene playing Jane (Mama) Burke on the television show Grey’s Anatomy. (S4/E2 “Love/Addiction” written by Debora Cahn 2007). In a previous episode, her character’s son, Dr. Preston Burke (played by Isaiah Washington) walks out on his wedding to Dr. Christina Yang (played by Sandra Oh). Now, Mama Burke returns to Seattle Grace Hospital to see Dr. Yang who is overwhelmed with a clutter of wedding gifts.

While Mama Burke waits for Christina who is reluctant, even afraid to meet her, she has conversations with three other doctors –Meredith Grey, Derek Shephard, and George O’Malley. She gives them wisdom to consider. When she finally has a conversation with Christina, she explains the reason for her visit. The penultimate question that Christina asks Mama Burke is if she can take away the wedding gifts.

“Of course I can,” Mama Burke/Diahann Carroll answers. In that declaration of confidence and competence, I hear the essence of Diahann Carroll, the elements of grace and class and responsibility that are the aspects of the lady without which Diahann Carroll is inconceivable.

In her book, The Legs are the Last to Go: Aging, Acting, Marrying & Other Things I Learned the Hard Way, written with Bob Morris, Carroll says that when Shonda Rhimes invited her to play the part that Rhimes wanted her to be Diahann Carroll. The affirmation was gratifying.

Can you do this thing? “Of course I can.”

Carroll started her career as a model, singer, and actress in her late teens. She acted in supporting roles in Carmen Jones, an all-black movie adaptation of the opera Carmen. Then, in 1959 she opens the movie Porgy and Bess with the lullaby “Summertime.”

Ms. Carroll, can you escort us from the now of now to the past of now to the films in which you acted and shine a light on the truth that they have to teach us? “Of Course I can.” In Carmen Jones the incandescent Dorothy Dandridge projects at once a joie de vivre and a tragic foreboding that is compelling. A young Harry Belafonte is a beautiful bronze Adonis. The movie is a retelling of the opera Carmen written by George Bizet who adapted a story written by French author Prosper Merimee. The story echoes a poem written by Alexander Pushkin, “The Gypsies.” It is a story of love, passion, possession, and violence. According to Pushkin, even the lives of the Gypsies living free are still not free. Pushkin writes:

“And yet, with you, free nature’s sons.
True happiness can ne’er be found;
And humblest tents are oft the haut
Of troubled dreams and hopes destroyed;
And nomad camps, though pitched in wilds,
From nature ravin give no shield;
There, too, will human passions rage,
And naught protect men from their fate.”

Pushkin, a son of Africa inspires a story written by a Frenchman, turned into an opera by a Frenchman about the Spanish and is adapted as a movie with an all African-American cast directed by Otto Preminger, an Austria-Hungarian. It is, in the end, a human story told by human beings. 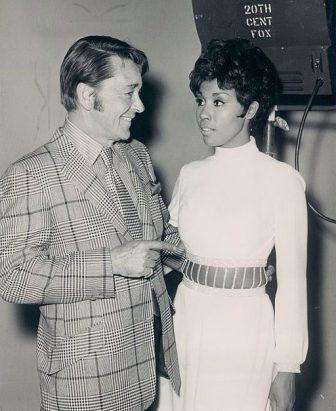 Similarly, Porgy and Bess, is a movie adaptation of an opera. This time the opera, written by George and Ira Gershwin with a libretto by Dubose and Dorothy Hayward is a collaboration of people from different cultural backgrounds coming together to tell a human story. Dubose Hayward, a native South Carolinian wrote a novel call Porgy set in an African-American community known as Catfish Row. It is a story about the love of two people who are marginal to the community, Porgy, a cripple and Bess, a goodtime girlfriend of Crown, a bully and a criminal. Bess drinks and partakes of “happy dust” that she gets from Sportin Life, a drug dealer. While the opera and the movie have been criticized for stereotypical portrayals of African Americans, the 1959 movie starring Dorothy Dandridge, Sydney Poitier, Pearl Baily, Sammy Davis, Jr. Brock Peters, and Diahann Carroll gives a multi-layered portrayal of an African-American community.

We see black love portrayed as a mother singing a lullaby to her baby as she waits on the docks for her husband, a fisherman to return home. We hear street vendors singing to announce their wares. I have heard stories of this practice from my parents. Soon there will be no one alive who remembers those days. The men play dice in their spare time, and we see one man giving his money to his wife before he partakes in the recreation. After a man is violently killed, we see the community coming together to help pay for his funeral. We see the community dressing up to go to the church picnic. Porgy encourages Bess to go to the picnic after which she is raped by Crown while the others get the boat back to Catfish Row. When Bess is sick, a church woman who does not approve of her lifestyle prays for her because she will not refuse anyone her prayers. Porgy nurses her with tenderness. And, in the end, when the lovers are separated, the story ends with Porgy’s determination to, with the help of God, find the woman he loves.

Movies, as all works of art, reflect the historical epoch within which they are created. As such, they become historical artifacts, but the best of them also tell us a truth that transcends time. In Paris Blues, (1961) Diahann Carroll acts with Paul Newman, Joanne Woodward, and Sydney Poitier. She and Woodward play friends who are on vacation in Paris where they meet Newman’s and Poitier’s characters who are American expatriate jazz musicians. Love is portrayed in the movie with walks along cobble-stone streets and along the river bank. We know that lovers have made love when we see Woodward in her underwear while Newman is still in bed. It is enough. The movie is not only interesting for the story of two couples falling in love where the musicians have to make a decision about whether or not to return to the United States to make a life with the women they now love, but it is also interesting for the love stories of the actors.

When we see the movie now, we know that Paul Newman and Joanne Woodward were married for fifty years, one of the longest and most successful marriages of two film stars. We know that Carroll and Poitier would have a passionate love affair that lasted nearly a decade. They never married, but both actors write about the love occupying a significant space in their lives. Carroll, married four times, takes her share of responsibility for her love affairs and marriages and for their outcomes.

Ms. Carroll can you teach us something about our own love affairs from the truth you tell about your own? She answers: “Of course I can.”

Diahann Carroll’s career went from the place where she was a supporting player to where she was the main actor on Broadway, winning a Tony Award in 1962 for her role in No Strings. She had a three-year affair with journalist David Frost who proposed. She lived the lifestyle of the rich and famous. This, however, did not stop her from playing the lead in the movie Claudine where she played a single welfare mother of six. She was nominated for an Academy Award for this performance.

Ms. Carroll, can you be the first African-American woman to play the lead in her own television show who is not a servant? She answers: “Of course I can.”

Ms. Carroll, can you call the producers of the television show Dynasty and suggest a character of means who is, at the same time, an alpha bitch, in the most positive sense of the word? She answers: “Of course I can.”

Then, when the wheel of fortune turned again, she again took supporting roles in movies and on television until the end of her life. She lived. Unlike Dorothy Dandridge, Marilyn Monroe, and Dinah Washington who died tragic deaths much too soon, Carroll lived long enough to face the facts of downsizing her life, of reconnecting with her daughter, of enjoying her grandchildren, and receiving her due recognition as a pioneer and as an elder.

We honor the elders because they have lived life, and when they tell us the truth, they can help us to navigate our own lives. We need not learn every lesson on our own skins. They help us to know that our own passions and heartbreaks are not new to the human condition. We are not alone. When the elders leave us and join the ancestors, when the spirit that animates their lives returns to mystery and to the Cosmos, their spirits can become the breath that we breathe, and it is our responsibility to use the breath for the sustenance and joy of humankind, nature and all of creation. The ancestors come to us and they give us the strength to answer the challenges of life with confidence and competence, with grace and style, and more than a touch of class as did Diahann Carroll.

Can we honor the legacies of people such as Diahann Carroll, opera star Jessye Norman, journalist and author Cokie Roberts, and Congressman Elijah Cummings? Can we breathe the breaths that will inspire us to be our best selves?

Of course we can.