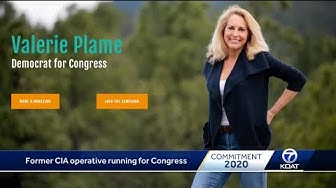 I’m giving little attention to the 23-candidates-and-counting race for the Democratic presidential nomination. I figure the ones who are doing it to raise their national exposure, banking name recognition for some future contest, will drop out. I look forward to watching the rest of them duke it out via rallies, debates, and of course, Twitter, and to use any influence I may have to ensure that the Present Occupant of the White House leaves Washington in defeat.

But when the race heats up, I will learn all I can through the lens I always use when it comes to elections, whether national or closer to home. Which candidate has the qualifications I prize: integrity, honesty, capability, heart, wisdom, presence? I can’t expect one person to hit the mark in every way, but too many misses and I’d be a fool to give my vote.

That’s why I was so disturbed to see that Valerie Plame is running for Congress in my district to replace Representative Ben Ray Luján, himself running to replace retiring Democratic Senator Tom Udall. Stepping down, Udall said, “Without the distraction of another campaign, I can get so much more done to help reverse the damage done to our planet, end the scourge of war, and to stop this president’s assault on our democracy and our communities,” which puts a rather fine point on the culture of electoral politics under the present administration.

If Plame’s name rings a bell, it’s probably from what has come to be called the “Plame Affair,” in which Plame was outed as a covert CIA officer in 2003. This Wikipedia page has an extensive chronology with many links, but if you google her name and CIA, you will find an abundance of sources.

If it rings a more recent bell, the cause is likely a series of antisemitic tweets Plame made in 2017. Plame evidently thinks she apologized for tweeting out her statements about Jews being behind 9/11 and wars in general, but as far as I can see, all she offered were excuses. She is quoted as saying she “only skimmed” the sites she shared via Twitter, that she was going through a lot at the time and “I should not have been anywhere near social media or a computer at that time in my life.”

I have no wish to get into the evergreen argument about whether a secret service is a necessary and proper function of democratic government. The precursor to the Central Intelligence Agency was the Office of Strategic Services (OSS), created during World War II to gather intelligence via espionage as part of the war effort. You won’t find many objections to covert action against the Nazis and other fascists. President Truman dissolved the agency after the war and a few months later, set in motion the CIA, the United States’ first peacetime international intelligence agency.

The question isn’t so much whether the agency should exist as whether it should be free to commit an appallingly large and terrible number of clandestine acts of violence and terrorism. Take a glance at this compilation of human rights violations by the CIA. The agency’s language is itself nauseating: “enhanced interrogation” (that’s waterboarding and other forms of torture, thoroughly documented by agencies ranging from the Red Cross to Human Rights Watch); “extraordinary rendition” (clandestinely transporting a captive to a foreign interrogation center not subject to U.S. law or constitutional rights); illegal experiments on U.S. citizens, including drug-fueld behavioral control experiments on unwitting subjects; many assassinations, some attempted and some accomplished; and much more.

<Valerie Plame was engaged in covert activities at the CIA, so we will never know for certain precisely what she did. We have her own comments to go on—she wrote a book that was made into a movie and she has also given a large number of talks and interviews—and David Corn’s account. Both accounts highlight her role in recruiting operatives who, like herself, worked the agenda of the agency responsible for the reprehensible acts noted above.

Plame evidently thinks this qualifies her for public office. This is promotional copy from her website:

While at the CIA, Valerie worked to protect America’s national security. She helped prevent the proliferation of weapons of mass destruction, specifically nuclear weapons. She managed top-secret covert programs designed to keep terrorists and rogue nation states from acquiring nuclear weapons. She was responsible for decision making at senior levels, recruiting foreign assets, managing multi-million dollar budgets, briefing US policy-makers, and demonstrating consistently solid judgment in a field where mistakes could prove disastrous.

So let’s see how Plame lines up by my criteria: integrity, honesty, capability, heart, wisdom, presence. For all I know, she could be a lovely person who is delightful to her friends and kind to her pets. But none of that matters since she was quite happy to lie for a living at the CIA, and apparently felt just fine about continuing her tenure there despite all the human rights violations for which the agency is culpable. She couldn’t be troubled even to read the vicious antisemitism she tweeted to her many followers, nor to consider how the ideas she lazily endorsed support white supremacy and hurt those it targets. I would no more want to put such a person in a position to protect my civil liberties and democracy than I would appoint a fox to watch the hen-house. Would you?

There is a candidate in this race who appeals to me and who deserves the contributions from Democrats that Plame, with her social status and connections, seems to have no trouble attracting. Teresa Leger Fernandez is a local attorney much of whose practice is representing tribal governments. Read this interview with her in a local paper and judge for yourself: someone who has crusaded for voting rights, who defends Indigenous communities, who supports the Green New Deal and women’s right to choose, versus someone whose claim to fame is being caught lying for a living?