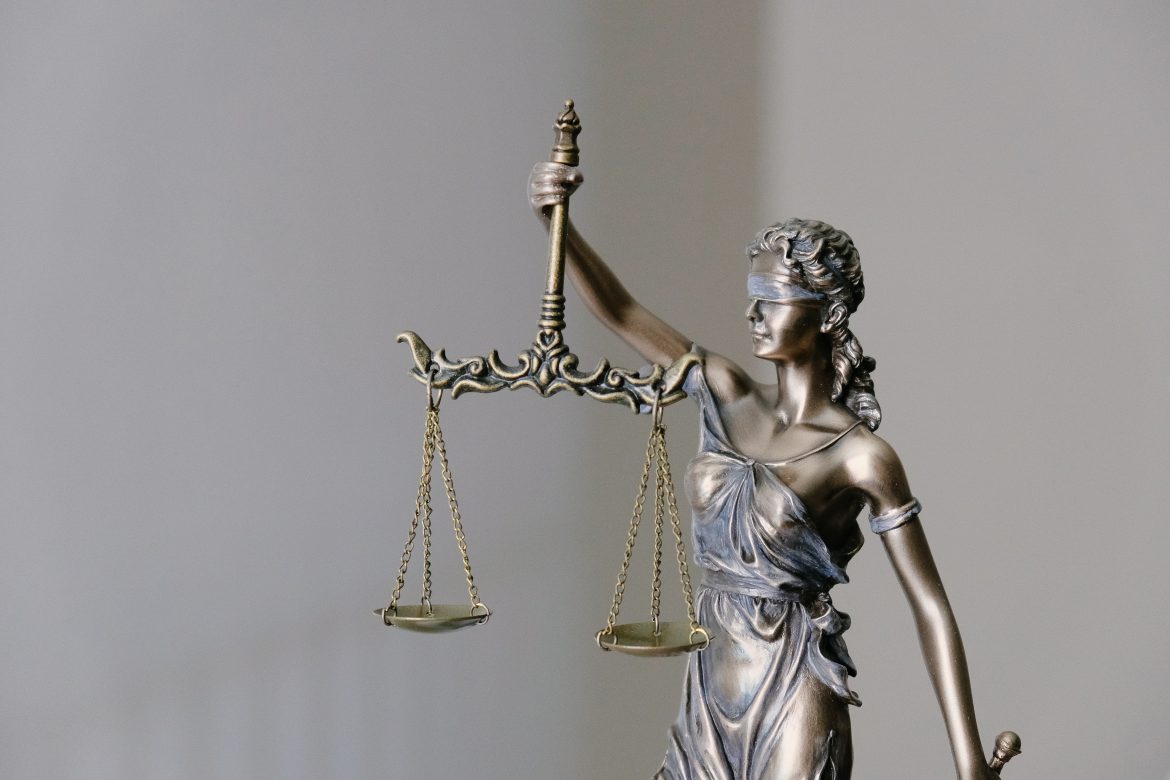 That Justice is a blind goddess

Is a thing to which we black are wise:

That once perhaps were eyes.

For millennia, humankind has imaged justice as a woman holding scales and sometimes a sword. In ancient Egypt, the goddess Maat symbolized justice, righteousness, and cosmic order. The scales represented the balance between the interests of individuals and the balance between the individual and society. At the end of one’s life, Maat weighed a person’s heart, the seat of the soul, of the intellect, and of emotions, against a feather. If the heart was light, it attained eternal life.

The ancient Greeks named the goddess of justice Themis and Dike. In Roman mythology Justitia symbolized the virtue of justice. The sword in her hand represented the power of the state and the character of justice that cuts both ways to a final resolution. The blindfold over the eyes of the goddess is a more recent addition to her symbology. It represents impartiality. However, Langston Hughes was correct. The idea of blind justice is no justice at all because injustice happens with eyes wide open.

Justice Ruth Bader Ginsburg, feminist civil rights attorney, a justice on the liberal wing of the United States Supreme Court, popular culture icon known as the Notorious RBG has died. Her passing from time to eternity is an occasion for grief, thanksgiving, and a renewed determination to live lives of justice and to establish justice in government and society. Justice RBG was and still is important because she could see, thus removing the blindfold from the goddess of justice. She understood that justice required us all to see clearly the real lives of real people and how the law could make life measurably better or worse.

RBG knew injustice on her own skin. She went to law school during a time when few women attended law school. When she graduated, she could not get a job at a law firm because they did not hire women. There were laws on the books that made women second-class citizens, subject to the wishes of their husbands. A woman could not get credit in her own name. Her husband would have to cosign any loan. In some states, it was not a crime for a husband to rape his wife.

RBG did not accept the world as it was. She said no. She dissented. Then, she took cases that served to end discrimination on the basis of sex, even if her client was a man. Following the example of Thurgood Marshall and the NAACP Legal Defense fund, she took cases that would help her chip away at discrimination against women in a step by step manner. She was a believer in incrementalism, not getting too far ahead of the shared values and beliefs of the society. However, she thought as society changed so ought the law. At the same time, she recognized that a change of laws could change society. She said:

“In think generally in our society, real change, enduring change, happens one step at a time.”

In 1973, she argued her first case before the Supreme Court – Frontier v. Richardson. This was a case where a married female Second Lieutenant in the Airforce did not receive a housing allowance as did her male colleagues of equal rank. RBG could see the effects of such discrimination, not only for the woman but for her entire family.

In 1975, she went to the high Court to argue in Weinberger v. Wiesenfeld that a man who had chosen to stay home and care for his child after the death of his wife was entitled to collect social security benefits. The benefit automatically went to women widows, but not to men. The idea was that men did not stay home to care for children. RBG could see the discrimination. She could see this one man and his family. She made the nation and the society also see the injustice of this kind of discrimination.

In 1977, she argued Califano v. Goldfarb. This case challenged a Louisiana law that allowed women to opt out of jury duty. RBG could see that if women were going to demand the equal rights of citizenship, they would have to assume equal responsibilities. She said:

“The gender line helps to keep women not on a pedestal, but in a cage.”

RBG could see that all too often in the history of the United States, lawmakers used the excuse of protecting women to actually discriminate against women and to treat women as less than a fully formed human adult. In her Senate confirmation hearing to become a Supreme Court justice, she was not coy about her stance on a woman’s right to choose. She said:

“It is essential to woman’s equality with men that her choice, that she be the decision-maker. This is something central to a woman’s life, to her dignity, and when government controls that decision for her, she’s being treated as less than a fully adult human responsible for her own choices.”

In the balance between the interests of the individual and the state, RBG could see that in order for the United States to be a more perfect union that there would need to be an expanded notion of the concept of We the People. When the United States Constitution was drafted, African Americans, Native Americans, women, and White men who did not own property were not included as We the People. However, over time, as the democratic concept expanded justice for these groups, the country became stronger, better, more just.

“A dissent announced orally, therefore, garners immediate attention. It signals that, in the dissenter’s view, the Court’s opinion is not just wrong, but to borrow Justice Stevens’ words, ‘profoundly misguided’.” Dissents are written for the future.

Her famous dissent in Ledbetter v. Goodyear Tire and Rubber Co. led to legislation that provided for equal pay for women. In the balance between the law and the individual, RBG could see the individual. The majority of the Court agreed that Ledbetter had been discriminated against, but they refused to rule in her favor based on a technicality that she had not filed her complaint in time. RBG wrote in dissent.

“The Court does not comprehend or is indifferent to the insidious way in which women can be victims of pay discrimination. Congress intended to govern real world employment practices and that world is what the Court ignores today. Initially you may not know that men are receiving more. Only over time is there strong cause to suspect that discrimination is at work. . . Today, the ball again lies in Congress’ court to correct the error into which the Court has fallen.”

Congress acted. The first piece of legislation that President Barack Obama signed was the Lilly Ledbetter Fair Pay Act of 2009.

RBG famously wrote in dissent to protect voting rights, affirmative action in higher education, and women’s access to contraception in their employee provided insurance plans. In the case of a woman’s access to birth control, RBG could see clearly the cosmopolitan character of the nation. She wrote:

“Our cosmopolitan nation is made up of people of almost every conceivable religious preference. In passing RFRA (Religious Freedom Restoration Act), Congress did not alter a tradition in which one person’s right to free exercise of her religion must be kept in harmony with the rights of her fellow citizens, and with the common good.”

For RBG, that balance was unjustly tilted away from the good of individual women when religious organizations are excused from providing insurance that includes contraception. RBG could see that women who work for such organizations are put at a disadvantage. In her dissent in the Little Sisters of the Poor Saints Peter and Paul Home Petitioner v. Pennsylvania et.al. written a few weeks before her death, she sees the thousands of women who will be affected. She writes:

“Destructive of the Women’s Health Amendment, this Court leaves women workers to fend for themselves to seek contraceptive coverage from sources other than their employer’s insurer and, absent another available source of funding, to pay for contraceptive services out of their own pockets, the Constitution’s Free Exercise Clause, all agree, does not call for that imbalanced result. Nor does the Religious. Freedom Restoration Act of 1993. . . condone harm to third parties occasioned by entire disregard of their needs. I therefore dissent from the Court’s judgment, under which, as the Government estimates, between 70,500 and 126,400 women would immediately lose access to no-cost contraceptive services.”

RBG, a flesh and blood human being, a daughter of the goddess of justice, could see injustice and thus helped to remove the blindfold from our concept of justice. Now that she is gone, we all have an added responsibility to follow the moral cosmic command to “do justice, and to love kindness, and to walk humbly with your God.”

We each have a human duty to see injustice and when we see it to say: “I Dissent.”