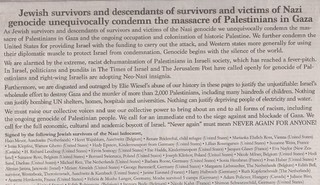 In a letter published today in The New York Times as an advertisement, 40 survivors of Nazi genocide and hundreds of their children are publicly deploring "the massacre of Palestinians in Gaza," Israel's ongoing occupation, and the troubling rise of systemic racism.

The letter, a response to an advertisement posted recently by Eli Wiesel, in which Palestinians were portrayed as championing "child sacrifice," is the first of its kind to be signed by so many Holocaust survivors, who are making waves by calling for a full boycott of Israel - roundly viewed as anathema by Jewish institutions in both the United States and Europe. Below is the full text of their letter:

As Jewish survivors and descendants of survivors and victims of the Nazi genocide we unequivocally condemn the massacre of Palestinians in Gaza and the ongoing occupation and colonization of historic Palestine. We further condemn the United States for providing Israel with the funding to carry out the attack, and Western states more generally for using their diplomatic muscle to protect Israel from condemnation. Genocide begins with the silence of the world.

We are alarmed by the extreme, racist dehumanization of Palestinians in Israeli society, which has reached a fever-pitch. In Israel, politicians and pundits in The Times of Israel and The Jerusalem Post have called openly for genocide of Palestinians and right-wing Israelis are adopting Neo-Nazi insignia.

Furthermore, we are disgusted and outraged by Elie Wiesel's abuse of our history in these pages to justify the unjustifiable: Israel's wholesale effort to destroy Gaza and the murder of more than 2,000 Palestinians, including many hundreds of children. Nothing can justify bombing UN shelters, homes, hospitals and universities. Nothing can justify depriving people of electricity and water.

We must raise our voices and use our collective power to bring about an end to all forms of racism, including the ongoing genocide of Palestinian people. We call for an immediate end to the siege against and blockade of Gaza. We call for the full economic, cultural and academic boycott of Israel. "Never again" must mean NEVER AGAIN FOR ANYONE! 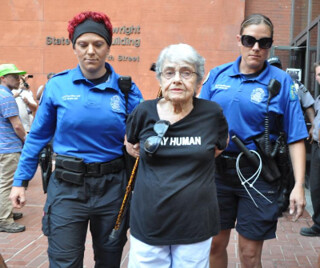 One of the signatories is Hedy Epstein, the 90-year-old human rights activist who was recently arrested in St. Louis before Governor Jay Nixon's downtown office, protesting his actions and the actions of militarized police in Ferguson, Missouri. Epstein (left) has long been a prominent voice in various civil and human rights movements, including those fighting for the human rights of Palestinians in both the West Bank and Gaza. Her voice is now being joined by many others who survived the horrors of the Holocaust, by aligning with the BDS movement, in visible and controversial ways.

The letter's appearance in the Times comes on the heels of an op-ed by Anthony Lerman which appeared in those pages on Friday. Entitled "The End of Liberal Zionism." It echoed many of the same critiques as those found in the letter.

As the death toll in Gaza continues to rise - nearly 2,100 people have died, mostly civilians - a growing number of diaspora Jews, from prominent journalists to community members, are finding themselves pained by Israel's actions and conflicted by their simultaneous support for and critiques of Israel.

These 40 survivors of one of the worst atrocities in human history have gone a step further, placing themselves in the post-Zionist camp due to what they see in Israel. Such voices have always been looked upon as a moral conscience within the Jewish community. Holocaust survivors speaking out in such an extreme way represents something profound taking place amidst the profoundly troubling history being created in the region.

As rockets continue to be fired into Israel and missiles continue to be dropped on Gaza, as innocents on both sides are terrorized, it's far too easy for such violence to be justified, particularly by a people, my people, who have endured the wrath of history.

These 40 voices should give such justifications pause.

David Harris-Gershon is author of the memoir What Do You Buy the Children of the Terrorist Who Tried to Kill Your Wife?, published recently by Oneworld Publications.