Hedy Epstein, a Holocaust survivor and long-time human rights activist, was arrested today in front of Governor Jay Nixon’s downtown office along with eight others.
Epstein, charged with failure to disperse, was protesting Nixon’s actions in Ferguson, and said after her detainment, “I’ve been doing this since I was a teenager. I didn’t think I would have to do it when I was 90. We need to stand up today so that people won’t have to do this when they’re 90.” 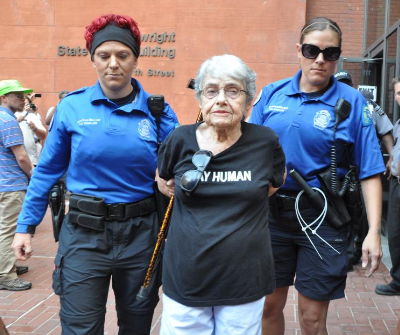 Epstein was arrested wearing a “Stay Human” t-shirt, an echo of her support for the Free Gaza Movement, just one of many civil and human rights causes she’s championed during her life upon emigrating to the United States after World War II and her work in the Nuremberg Medical Trial. From her website:

Hedy became active professionally and personally in the causes of civil and human rights and social justice. Some of her causes have included fair housing, abortion rights, and antiwar activities. As a peace delegate, Hedy journeyed to Guatemala, Nicaragua, and Cambodia in 1989. Hedy visited the Israeli Occupied West Bank five times since 2003, to witness the facts on the ground. She participated in several non-violent demonstrations, together with Israelis, Palestinians & other internationals, in opposition to Israel’s occupation of Palestinian land, the 25-foot high cement wall, and the demolition of Palestinian homes and olive orchards.

Epstein stood before Nixon’s office, declaring that she didn’t want there to be a need for Americans to protest systemic racism and the injustices we’ve seen in Ferguson for many years to come.
She also stood on the shoulders of history, staring into a history being made which we all would like to soon look past, with justice in hand.