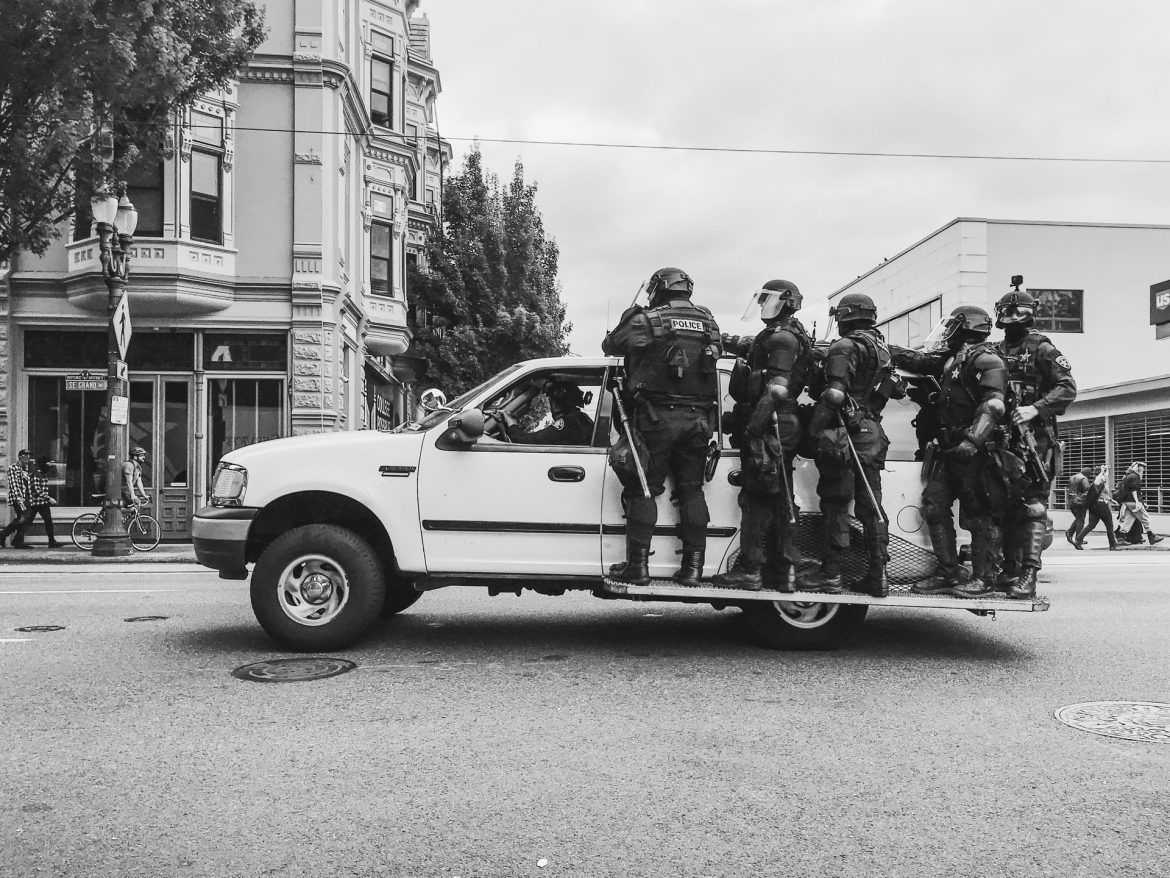 Police in Portland, OR at Proud Boys/Antifa riot

Racial injustice, inequality and violence are as American as apple pie. In recent months, however, the national mythology that buttresses racism and the edifices erected to sustain it have begun to rupture.

This rupture is exposing the parallel between foreign wars and domestic racism. Militarism abroad and racist violence at home—two constants in American history—are two sides of the same coin.

The long list of Black Americans to die at the hands of police and white vigilantes belies the nation’s comforting narrative of exceptionalism—the narrative that holds the United States to be a universally admired nation of virtue. America’s racism and police violence at home are inseparably linked to wars waged abroad in service of its self-declared role as policeman of the world. Like the nation, American policing has grown militaristic.

Frederick Douglass (1818-1895), abolitionist and social reformer, in addressing the Rochester Ladies Anti-Slavery Society in July 1852, averred: “America is false to the past, false to the present, and solemnly binds herself to be false to the future….” Those words are as poignant today as they were then.

America is beginning to reckon with the violence of the past and present. Law enforcement has historically been used to restrain individuals and groups seen as a threat to the status quo.

In the South, police emerged out of 18th century slave patrols. Police departments multiplied in southern states after the Civil War (1861-65) to control the newly-freed enslaved population and to reinforce white supremacy. And in the North, during the early 20th century, police were employed to restrain the rising number of immigrants and to crush the growing union movement.

During the 1950s, to sensitize Americans to police violence, a civil rights organization presented a petition to the United Nations in 1951 entitled, “We Charge Genocide: The Crime of Government Against the Negro People,” it read: “Once the classic method of lynching was the rope. Now it is the policeman’s bullet….We submit that the evidence suggests that the killing of Negroes has become police policy in the United States and that police policy is the most practical expression of government policy.”

Police culture was militarized in the 1960s in reaction to urban uprisings and anti-Vietnam war protests. It accelerated during the Nixon administration, as did the law-and-order rhetoric now used routinely by President Trump.

President Ronald Reagan (1981-89) employed tough-on-crime rhetoric to gain support for his war on drugs, war on the welfare state and efforts to strengthen the national security state. During his administration, local police departments’ Special Weapons and Tactics (SWAT) teams increased dramatically and police began receiving training from the military.

Tough-on-crime policies continued through the administrations of George H.W. Bush (1989-93) and Bill Clinton (1993-2001). The Violent Crime Control and Law Enforcement Act, signed by Clinton in 1994, has been blamed for America’s massive incarceration rates and for devastating Black communities.

President George W. Bush’s (2001-2009) war on terror, carried out against the people of Afghanistan and Iraq, solidified Washington’s racist and militaristic impulses at home.

The history of police violence in Black communities has not been confined to one city, it has, however, been especially acute in Chicago, Ill. Between 1972 and 1991 officers at one police station in Chicago methodically and systematically tortured over 100 Black men. Although the brutality was an open secret among police, prosecutors and elected officials in Chicago during that time, nothing was done until the atrocities were finally exposed by Chicago newspapers beginning in 1990.

Today, in most poor and minority neighborhoods, police officers act more like an occupying army, patrolling with an “us against them” warrior mentality. Police using “no knock” warrants and kicking in doors during suspected drug raids are all too reminiscent of U.S. soldiers barging into the homes of frightened Afghans and Iraqis.

The police, once referred to as peace officers and whose uniforms reflected that title, are now suited up like battle-ready soldiers. The increased use of military equipment by police departments has created a condition in which officers approach residents as if they were a dangerous enemy that must be subdued.

Militarized police departments, with outsized budgets and little oversight, have largely been supported by the public. Similarly, the country’s uncritical ardor for the military has led to the growth of a national security state with bloated budgets and minimal oversight.

The United States currently invests well over $100 billion annually on policing and over $90 billion on incarceration. And in 2019, the Project on Government Oversight estimated that the yearly national security budget was approximately $1.25 trillion.

Since 1997, the Department of Defense has dispersed more than $6 billion of equipment, weapons and armored vehicles to 8,000 law enforcement agencies. This surplus equipment has been transferred at no cost and without training to police departments under the 1033 provision of the National Defense Authorization Act. Mine-Resistant Ambush Protected vehicles, designed to withstand blasts in Afghanistan and Iraq, have rolled on American streets during recent protests.

In 2019, approximately 15,750 military items were distributed to police departments across the country.

The militarization of American policing is reflected in the training they receive. Federal, state and local law enforcement officers, including Immigration and Customs Enforcement agents, have traveled abroad for training. The most controversial of these police exchange programs is with the state of Israel. U.S. police are being instructed in a war zone and being taught by the Israeli army and police force.

It should be noted that Amnesty International, as well as the U.S. State Department, have condemned Israeli forces for their human rights violations against Palestinians. Those violations include torture, ill-treatment, unlawful killings and the use of excessive force against peaceful protestors.

The war machine and weapons used by the United States against people in Afghanistan, Iraq, Yemen, Syria, Iran, Libya, Somalia have become the “less lethal” arsenal of law enforcement —the arsenal now being employed against Americans demanding an end to racist violence.

As was recently demonstrated on America’s streets, camouflage-clad officers, armed with all the latest military hardware, have not been reluctant to use force. Police have used tear gas against protestors in 100 different U.S. cities since the public murder in May of George Floyd at the hands of Minneapolis police.

Advocates of racial justice are seeing firsthand what happens when militarization is brought home. They have confronted a president eager and willing to turn the war machine on them.

In the same month, Trump issued an executive order marshaling forces to protect Confederate monuments and statues. Shortly thereafter, the DHS—tasked with border security and international threats—sent officers from Customs and Border Protection and other federal agencies to Washington, D.C., Seattle and Portland.

Although uninvited by state and local officials, Trump ordered federal forces to Portland as part of his law-and-order offensive. Included was an elite special operations tactical unit that had served in Afghanistan and Iraq.

Since arriving in July to protect federal property, demonstrations have escalated. One peaceful demonstrator has been hospitalized with a serious skull fracture after being shot in the face by federal officers with a “less lethal” munition. And individuals not near federal property have been detained by unidentified troops, with no explanation as to their arrest.

Despite the national outrage over the tactics being used, Trump has threatened to send federal troops to New York, Detroit, Chicago, Philadelphia, Baltimore and Oakland, California.

When repressive regimes are toppled, the first statues to be felled are those erected by and for those regime’s dictators. Across America and the world, monuments to racists and imperialists have been defaced or razed, while the culture of violence and militarism remains.

There is growing awareness that the institutions and belief systems designed to support and maintain racism, militarism and war are the foreign and domestic versions of a single ideology—an ideology that will not fall as easily as the statues.