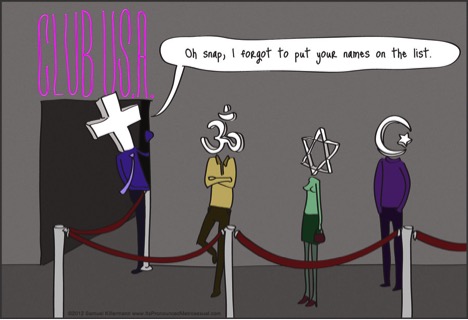 In this first installment, Hannah Mecaskey Conley argues that faith must adapt in response to history and encourages us to recognize the beauty and pain of the Other.

Taking Back Christmas from the Capitalist Marketplace

Rabbi Lerner calls upon Christians to take back Christmas from the grasp of the capitalist marketplace.

Reflections on Theology from an Anglo-Jewish Feminist Perspective

Goddess and God in the World: Conversations in Embodied Theology by Carol P Christ and Judith Plaskow.

We who are male are born into a society in which men are more privileged and powerful than women. This patriarchal society gives men the right to enjoy unearned advantage over women. Patriarchy defines what roles men and women play, sets the limits of opportunity, and determines the protections that women receive. Men of all races and of every religion and nation are complicit in patriarchy which permeates every aspect of culture, especially our religion. No men are exempt from unfairly getting the unearned benefit conferred by systems of patriarchy and privilege when women speak up against the system. No women are exempt from unjust suspicion, criticism, and hostility when they speak against institutional sexism and concrete statements or acts that denigrate or demean women or remain silent when they could be advocates and practitioners of justice.

The Significance of Martin Luther

Editor's Note: We at Tikkun wish to join our allies in the Lutheran Church and other Protestants who are celebrating the 500th anniversary of the start of the Protestant reformation which began with Martin Luther. At the same time, we are aware of the hateful teachings of Luther about Jews and about Muslims. These issues are discussed fully in the Summer 2017 issue of Tikkun in "Luther Against the Jews" by Craig L. Nessan (professor of Education and the Renewal of the Church at Warburg Theological Seminary), and in "Deconstructing Historical Prejudice: Luther's Treatment of the Turks (Muslims)w by Charles Amjad-Ali professor of Justice and Christian Community at Luther Seminary). You can read these important articles by subscribing to Tikkun www.tikkun.org/subscribe (and then  emailing chris.tikkun@gmail.com and asking him to send you a copy of that issue after you've subscribed. Susannah Heschel in the pages of Tikkun has demonstrated that during, and then after, the Holocaust, some of these prejudices have never fully been understood by some contemporary Lutherans, even as we in Tikkun also know that there are many Lutherans in the U.S. who have a sincere commitment to overcome and repent for this legacy. And as you'll see by reading the interview below, there are important spiritual insights that contemporary Lutherans can bring to the Christian world which deserve respect and appreciation.

[Editor's note: While Tikkun is a Jewish magazine and it is also an interfaith and secular-humanist welcoming magazine, many of whose authors and readers are not Jewish. While we claim not special expertise on the problems facing Christianity, some of our authors are outstanding Christian thinkers and activists, so they may be in a better position than our tiny staff to judge whether the articles below are crossing some line which we at Tikkun should not be crossing. Let us know. Meanwhile, while the details are quite different, the Muslim and Jewish communities also have major defections caused by the failure of some of their mainstream institutions to embody the highest values of the Jewish and Muslim traditions, usually for failing to actually embody their own teachings about the sanctity of all human beings on the planet. Just saying....

As I walked home I felt as if my feet weren’t touching the ground. The bright faces of the handicapped children were imprinted in my memory, and now I thought of each one of them, walking and singing, the nuns looking after them. I retained the light of the convent within me: its grace touched me, expanding an inner space, cheering unknown corners.

The Incident at Our Lady

Phil had Sheila on the mind when he walked into one of the BOYS bathrooms at Our Lady of Peace Elementary in West Russelsburg. He’d started his shift as Second Security Officer at 6:00am, about an hour before most teachers get there, and about an hour and a half before the earliest kids get dropped off for the Before School Fitness Club, which was really just thirty minutes of kids running in circles on the field while one of the coaches watched, thirty minutes of free daycare and an earlier arrival at the office for the parents who didn’t care if they made their poor kids show up sweaty for the 8:00am Daily General Assembly. Phil had Sheila on the mind when, at about 9:00am, the school was quiet except in the classrooms and he’d walked down the quiet hallway in the main classroom building and walked into one of the BOYS bathrooms. He’d been thinking about her all morning, as usual, and he’d been thinking about their seventh date—set to happen that night—and the fact that he was now going by Phil instead of Phillip, all because on their first date, three weeks ago, she said in a nervous fast-talking first-date kind of jitters voice, Phillip? Phil? Is that you?

Rev. Rohr is one of the most creative thinkers in the contemporary Christian world. He seeks to do for Christianity what many of us in the Jewish Renewal movement are seeking to do for Judaism, namely make it spiritually alive and ethically coherent with the highest aspirations of our Abrahamic religions: for a world based on love, generosity, social and economic justice and environmental sanity. To see what that would might look like, please read www.tikkun.org/covenant.  --Rabbi Michael Lerner, editor, Tikkun

Biblical messages often proceed from historical incidents, but the actual message does not depend upon communicating those events with perfect factual accuracy. Any good writer knows that! Spiritual writers are not primarily journalists.

Against Patriarchy: Reclaiming the Christian Doctrine of the Virgin Birth

The meaning of the virgin birth got lost in translation: it wasn't meant to vilify female sexuality but to echo a prophetic challenge to oppression.

Editor's Note: as a Jewish and Interfaith magazine, we seek to publish the most love-and-justice-and-environmentally-sensitive articles we can find from any religious or spiritual or secular humanist perspective, feeling at some level deeply aligned with people of all faiths or none who want the NEW BOTTOM LINE as defined at www.spiritualprogressives.org/covenant. A Christian Humanist Manifesto:   November 14, 2012 by Roger E. Olson

Few words provoke such a negative reaction among conservative Christians as “humanism.” Few single words so well summarize secular culture and its anthropocentrism as “humanism.” In the popular imagination, anyway, “humanism” evokes the impression of what media talking heads call “the indomitable human spirit” and conservative Christians call “man-centeredness.” By itself, however, without adjectival qualifications, “humanism” simply means belief in the dignity, worth and cultural creativity of human beings. Add “Renaissance” to “humanism” and you get Michelangelo and Shakespeare. Add “secular” to “humanism” and you get Aldous Huxley and John Dewey. What do you get when you add “Christian” to “humanism” and is that even possible?

A Response from the River Jordan

The myth of Sisyphus may imply that the best that we humans can expect is that, when tired from endlessly rolling the rock back up the hill, we may gather together at the River Jordan and weep. I wish Peter were right, but I still doubt that it is possible to overcome the otherness of the Other, except briefly, randomly, undependably.

Christianity for the Postmodern Mind

Christ Actually: The Son of God for the Secular Age

The Book of Forgiving: The Fourfold Path for Healing Ourselves and Our World

James Carroll’s Constantine’s Sword unveiled to many Christians the sordid way that Christian institutions transformed Jesus’s message of liberation into a doctrine to support imperial domination and the persecution of Jews. In this newer book, Carroll attempts to reclaim the prophetic voice of Jesus that is rooted in Jewish messianism: “Recovering that sense of Christian Jewishness, like recovering the Jewishness of Jesus, defines the essential work that Christians must do in a post-Auschwitz world.” Throughout this powerful and insightful presentation of the ways a Christian can be “faithful to the classical tradition of Christian faith while simultaneously limiting assertion about (Jesus) to a modern—or postmodern—mind,” Carroll reads Christian texts from a contemporary perspective, in light of the distortions that led to the destructive misuse of these texts in the past. Contemporary Christians can take special pride in the work of Archbishop Desmond Tutu, the outspoken Christian activist whose challenge to apartheid won him the 1984 Nobel Peace Prize. Tutu became the chair of South Africa’s Truth and Reconciliation Commission, which sought to lead his country beyond the pain and anger that had festered under racist oppression. This beautiful and insightful book should be part of the school curriculum in every country of the world.

There is much for Jews and people of other faith traditions to admire in Christian spiritual consciousness, once we get past the justifiable pain of how the official versions of Christianity treated us in the past. With Pope Francis embracing the kind of Christianity that is so deeply rooted in the liberation traditions of Judaism, it becomes much easier for Jews to open themselves to listening respectfully and with an open heart to Christian spiritual wisdom. Here are some examples of that spiritual wisdom

The Gift of Holy Surprise: Pilgrimage of Resurrection through Creative Practice (a love note)
Christine | May 24, 2015

This is the eighth in a series of eight reflections over the season of Easter on making a pilgrimage of resurrection. Word for Today: Spirit

‘What is serious to men is often very trivial in the sight of God. What in God might appear to us as "play" is perhaps what He Himself takes most seriously.