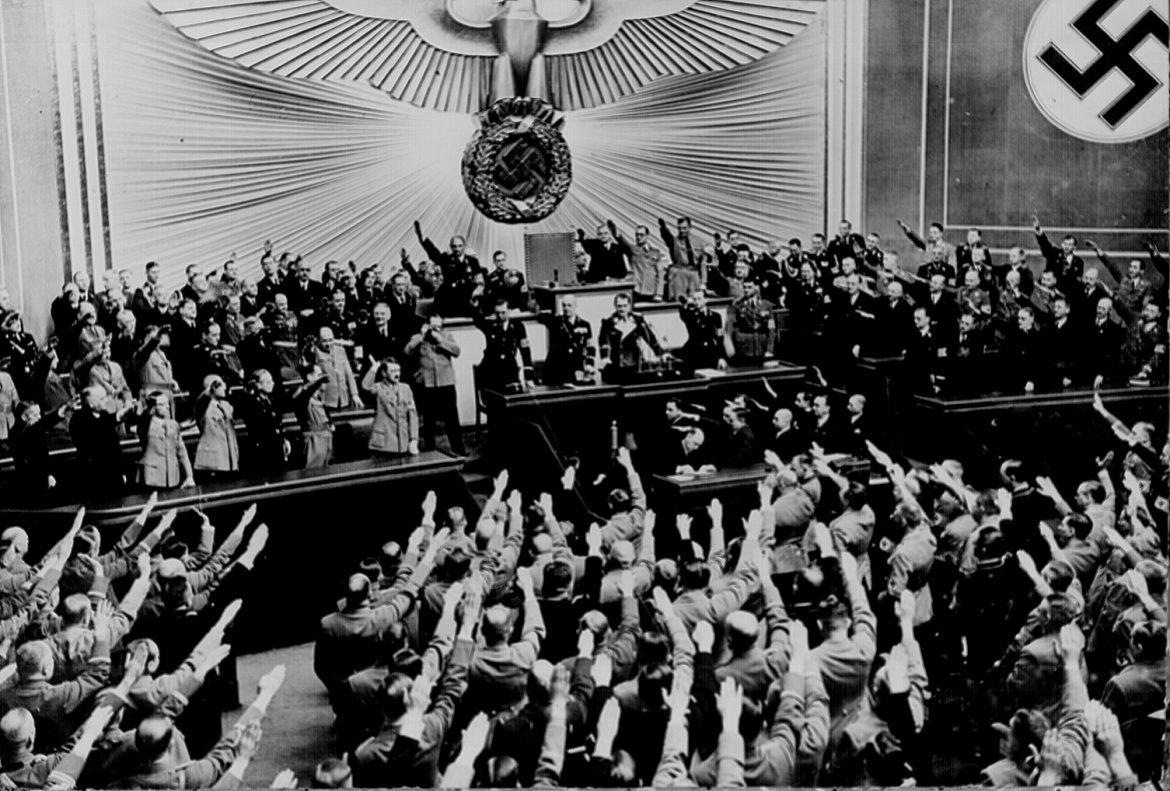 By Thomas Klikauer and Norman Simms

The history of the Austrian court case against SS-Oberscharführer Franz Murer, known as the Butcher of Vilnius, dates back to the early years of Nazism in Austria and the immediate period after the allied force’s victory over Nazi-Germany’s failed Third Reich. In post-1945 Germany and Austria, the Allied forces carried out what a programme commonly known as Denazification (Stiefel 1981). The idea was to eliminate Nazi ideology and attitudes in both German and Austrian society, press, economy, culture, the legal system and politics. It was to remove Nazi party members and of Nazi organizations, like the SS, from these newly defeated German-speaking states. Agreed to in the Potsdam Agreement, the Joint Chiefs of Staff Directive 1067 outlined the formation of commissions in each of the various zones of occupation (French, British, Russian and American).

For many Germans and Austrians, denazification began simply by filling in a questionnaire about their Nazi, SS, and similar membership and activities during the Third Reich. Five categories were established: Major Offenders, Offenders, Lesser Offenders, Followers, and Exonerated Persons. In Austria, denazification detected 524,000 Nazis (members of the NSDAP), of whom 80,000 were interned, while 30,000 escaped across Austria’s border. Nevertheless, by 1949 there was a general pardon, thus leaving the whole process of political re-education far from completed.

In Germany things were even worse. We know this thanks to the diligent investigations carried out by none other than Niklas Frank, son of the Nazi Governor-General of the occupied Polish territories and Gold Nazi Party Badge carrier, Hans Frank, who was hanged executed for his crimes against humanity. Niklas was born in 1939 and grew up with a personal mission to expose the activities of his father and similar officials of the Nazi regime. He has conducted an amazing archival investigation on the deficiencies of denazification. Niklas Frank combed through 3.6 million files and found that just ‘1,667 were found to be genuine Nazis’ (Frank 2016:10). After this astute empirical investigation, Frank’s sobering conclusion is made clear in the title of his book Dark Souls and Cowards – How Scandalous and Funny the Germans Cleansed Themselves during Denazification. In other words, Denazification was nothing but a whitewash and may be described by the satirical phrase Persilschein, a process that washes you, like Persil washing-powder, white/clean of all crimes.

Many top-Nazis escaped from West Germany, went into internal hiding or received a certificate of Persilschein. The father of Niklas Frank, Hans, did not escape. He was found guilty of mass murder and crimes against humanity. Hans Frank was executed by the International Military Tribunal in Nuremberg on the 16th October 1946. Unlike the elder Frank, many other SS murders did escape. Further court cases like the Frankfurt’s Auschwitz Trial (1963-1965) and the trial of Eichmann (1961) occurred (Lasok 1962). But Franz Murer (1963) was never put before a denazification commission, though this unrepentant and unreconstructed Nazi was put on trial in 1963.

Franz Murer voluntarily joined the Nazi party at the age of twenty-six to become the Gebietskommissar [territorial commissioner] of Jewish affairs in Vilnius (Lithuania). Murer was known as a sadist, displaying special cruelty towards the Jews. In December 1948, he was deported to the Soviet Union since Vilnius was under Soviet jurisdiction and there was found guilty of murdering Soviet citizens, not, however, for the mass-murder of Jews. He was sentenced to twenty-five years of hard labour. Not long after, thanks to the Austrian State Treaty, he was returned to Austria—a free man! In 1963, Simon Wiesenthal managed to get him prosecuted. The movie Murer: Anatomy of a Trial depicts his trial in four languages, German, English, Yiddish and Hebrew.

The 137-minute documentary-like movie was produced in 2018 as an Austro-Luxemburgian co-production. Based on original documents, the idea behind the movie was not so much to show yet another Nazi criminal on trial but, rather, to depict a range of powerful individuals and interest groups that operated behind the scenes in order to get Franz Murer off the hook. Partly because of pretended naivety, partly because of pure denial and partly because of a deliberate, well-planned and executed strategy to have Murer acquitted, the documentary movie shows the raft of lies, deceptions and concealments used to assure that the truth about Murer never would come to light during the ten days of court proceedings.

Using original court documents, the film focuses not only on Murer, but on the public prosecutor, the jury, the judge and Murer’s defense lawyer. It also looks at Holocaust survivor witnesses, the Austrian public that was largely supportive of Murer, as well as an American court reporter and a gaggle of old Nazis determined to get protect their former SS comrade. All this took place in the early 1960s Austria, the country that gave the world Adolf Hitler and the United Nations Secretary General and former SA man Kurt Waldheim. Despite his criminal past—Waldheim committed war crimes against Yugoslav partisans and was involved in the deportation of Jews from Greece in 1942—ran for president and won. He denied everything with the classic Nazi excuse: “I was only doing my duty [and] I have only obeyed orders’. The running joke at the time was, “It was not Waldheim but his horse who was a member of the SA”. He also came to be known in the Western press as “Kurt Warcrime.”

Hitler’s, Murer’s and Waldheim’s Austria is a nation that had its own secret Nazi party long before Hitler took power in Germany. Many Austrians celebrated the Anschluss (annexation) to Hitler’s Grossdeutsches Reich justifying it by the Nazi ideology of Heim ins Reich (return home to the empire). To this day, similar Nazi ideologies remain deeply ingrained in the Austrian Seele (soul). Perhaps the former American Secretary of State Madeleine Albright was right when she remarked: “It is easier to remove tyrants and destroy concentration camps than to kill the ideas that gave them birth” (Albright 2018:191). This is a sentiment that lives on in Austria long after the victory over Hitler’s armies.

It is not at all surprising that until the 1960s the name Franz Murer wasn’t well-known in the highly selective consciousness of many Austrians about Nazism and the Holocaust. In the post-war years, old Nazis and outright war criminals were re-integrated into Austrian society. With their crimes made to vanish into thin air, their victims dead or otherwise silenced, these criminals lived out their lives in an underserved peaceful and prosperous retirement, seeming to be Grossbauern like Murer, farmers or better “fat peasants.” Almost no one could guess that only a few years earlier, SS officer F. Murer was more than instrumental in the eradication of Jewish existence in the ghetto in Vilnius. Eventually, though, his brutality and sadism caught up with him and he was put on trial.

By the time of the Austrian trial, Murer had spent a brief period of just five years incarcerated in the USSR for his war crimes of mass murder. Murer, as we pointed out, was returned to Austria in the political games of the Cold War. Strangely, despite his conviction as a war criminal, Austrian prosecutors never filed charges against him. Perhaps, this was not so strange after all, because of the continuing old Nazi networks inside the Austrian judiciary system. Unlike some other SS officers, Murer did not feel it necessary to change his name or to go into hiding nor did he attempt to make an escape to South America, like his old buddies Mengele, Eichmann, or that most insane-sadistic Gestapo torturer, Klaus Barbie. Instead, mass-murderer Murer carried on his life rather openly at his country-side farm. Conceivably, Murer thought that he would be protected by local goodwill and his political friends, i.e., old Nazis securely positioned in the higher echelons of Austria’s political and legal apparatus. Still, in the relentless way he did his work, Simon Wiesenthal detected Franz Murer while the Nazi was rusticating in the local region of Steiermark. It wasn’t until global news picked up Wiesenthal’s revelation that felt compelled Austrians to reopen his case. Subsequently, Murer spent about two years in jail awaiting trial as the Butcher of Vilnius.

Historically, Vilnius had been the intellectual centre of Jewish culture in Eastern Europe, known as the Jerusalem of the West. With German occupation, Murer’s SS utterly obliterated Jewish people and culture in the city just as his Führer had announced in 1939: “Die Vernichtung der jüdischen Rasse in Europa” (The annihilation of the Jewish race in Europe) (Hitler 1939). Murer and his thugs achieved their goal of making Vilnius and Lithuania judenrein (ethnically cleansed of Jews) with the support of the Lithuanian population. Before Murer arrived some 80,000 Jews lived in Vilnius. After the SS mass murder, barely a few hundred survived. This is what the Murer trial was all about. The movie about the Murer trial feels like a documentary with a dramatic tension that reconstructed the court proceedings and the people around it.

The film particularly exposes the discrepancy between private narratives in a family of people subject to mass murder and the reality of history. Post-war Germany, Austria, too, especially in the late 1950s and early 1960s, had deliberately set up blind spots when it came to the Holocaust. The movie highlights these stains of self-denial by showing how those operating behind the scene, the old comradeship of ex-Nazis, not least the judge with a Nazi past, and the network of political influence-peddling took place. The importance of this most daunting Murer movie lies not alone in showing what happened over fifty years ago in a courtroom and inside the soul of Austrian society; it also throws light on a country in which Austro-fascism has not died (Klikauer 2018). Austria remains a country where, until recently, a former Neo-Nazi, Heinz–Christian Strache, could be deputy prime minister, until, that is, the corruption so visually exposed in the Ibiza scandal ended his career. Neo-Nazi Strache’s party used to receive about 25% of the public vote during federal elections throughout Austria but after the Ibiza affair, FPÖ support was down slightly in 2019. Not enough, alas, to give confidence that the Austrians have learned a lesson since the Murer trial. Perhaps the film will make a difference. Perhaps.

All this is particularly relevant now. The more the background of the perpetrators—their life histories, the embedded sources in their computers from terrorist online journals, the affiliations made on social media and in ideological-based discussion groups—to the current scourge of anti-Semitic attacks on American institutions and individuals continues, the clearer become the similarities to the talk and action of German Neo-Nazis and their allies in Europe.  The analogies between Hitler’s rise and the cover-up of his associates after World War Two no longer seem far-fetched but rather frighteningly pertinent.

Norman Simms was born in Brooklyn, NY in 1940, educated at Alfred University and then Washington University in Saint Louis. He has lived and worked in Canada, Israel, France and New  Zealand. He is now a retired scholar.