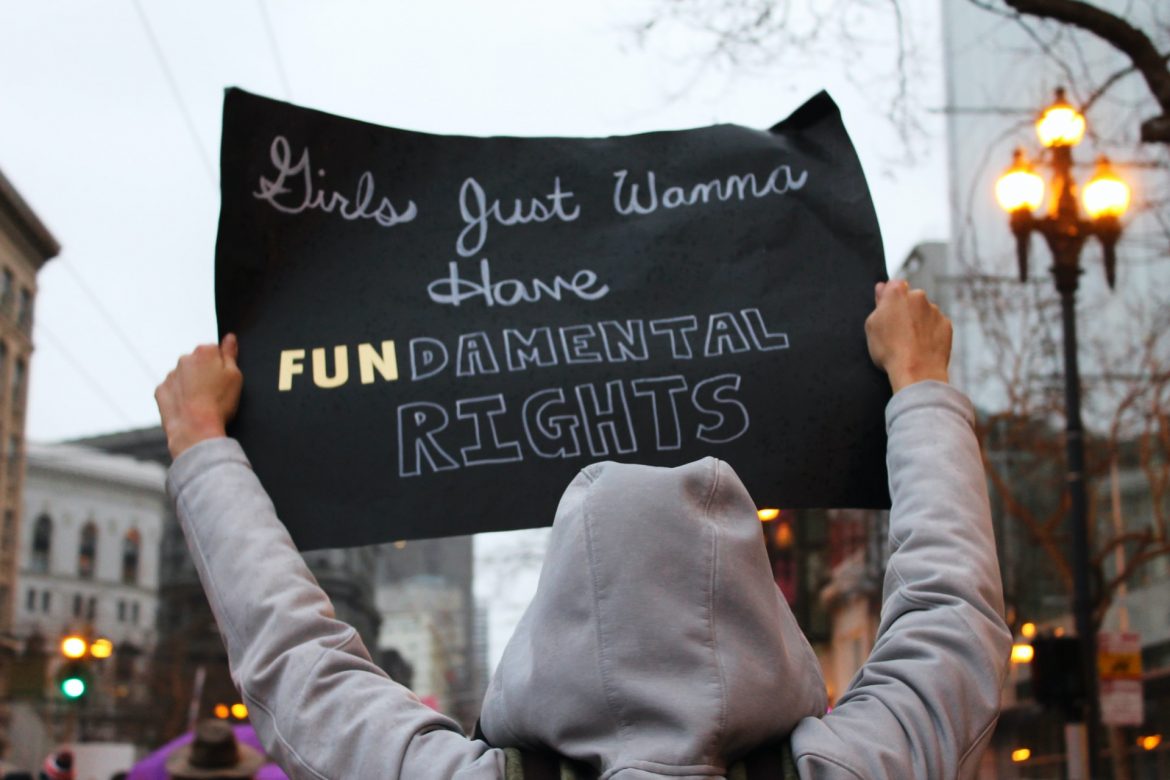 Let us be clear.

We hold this truth to be self-evident that all human beings, women and men, are created equal, that they are endowed by their creator with the inalienable right to have power over their own bodies.

Human rights begin at birth. Article one of the Universal Declaration of Human Rights says: ”All human beings are born free and equal in dignity and rights. They are endowed with reason and conscience and should act toward one another in the spirit of brotherhood.”

Article three of the UDHR says:”Everyone has the right to life, liberty, and security of person. No one should be held in slavery or servitude; slavery and the slave trade shall be prohibited in all their forms.”

The UDHR is correct when it says that human beings are endowed with reason and conscience. This is where the biological, philosophical, theological, and ethical arguments regarding the status of the unborn individual have their place. Woman can reason and decide for herself whether or not she wants to give the gift of birth. However, she ought not to be forced by law to undergo unnecessary medical procedures, be forced by law to look at ultrasound images or listen to lectures, sometimes untrue, regarding the after effects of abortion. She ought not have to walk past loud angry crowds telling her that she is a murderer. Woman ought to be free to seek her own information regarding the procedure and then make her decision, and her decision ought to be respected. Woman understands that as free and equal human beings, she is responsible for her own conscience after she decides one way or the other on having an abortion.

This August is the centennial of the 19th amendment to the Constitution that gives the right to vote to women in the United States. The vote gives women the power to defend their inalienable rights, including the fundamental right to have power over their own bodies. In 1848, Elizabeth Cady Stanton wrote a Declaration of Sentiments on the occasion of the Seneca Falls Convention.

Much that Stanton observed about the status of women in society has changed. Women can vote; we are not civilly dead when we marry; we have no legal obligation to obey our husbands and our husbands do not have the right to administer chastisement to their wives. Women are teachers of theology, medicine, law, and a variety of subjects in higher education. Women may still be underrepresented in corporate boardrooms and in the halls of legislatures on every level of government in the United States, but women are still present in those spaces in ways that make them the hope and the dream of Stanton and first wave feminists, women’s rights activists of the 19th and early 20th centuries.

However, I think that there is one complaint against the male power structure listed in Stanton’s Declaration that is still true. She writes: “He has endeavored, in every way that he could to destroy her confidence in her own powers, to lessen her self-respect, and to make her willing to lead a dependent and abject life.”

Women ought to understand their inalienable right to have power over their own bodies as a power. It is a power of life and death. Without the power to exercise her reproductive freedom, a woman could very likely lead a dependent and abject life. Yet, may women vote for their own oppression. Some women do not want power of life and death, and some men do not want woman to have this power. Just as some women opposed female suffrage and some women oppose the Equal Rights Amendment, women vote to make themselves powerless over their own bodies. The states that have anti-abortion laws that already make abortion difficult have such laws because women vote for the politicians who make them. During this pandemic, some states have made it difficult for women to have an abortion at home, which is possible and safe with two pills, by requiring women to travel to distant reproductive healthcare clinics to swallow the second pill. Women argue that certain employers have the right to refuse to provide birth control for their employees.

Women vote for politicians who would bring the power of the state to a woman’s door in the matter of reproduction. Not all pregnancies end in a live birth, no matter the woman’s decision. Some medical experts estimate that as many as 20% of known pregnancies end in spontaneous abortions, those performed by nature. The number could be higher because spontaneous abortions happen to some women even before they realize they are pregnant. About 1 in 160 pregnancies end in still birth. So, when states pass draconian anti-abortion laws that outlaw the procedure at a very early stage, even before a woman knows she is pregnant, how are these laws going to be enforced? Will the abortion police come knocking on the door to determine if a woman’s failed pregnancy was a spontaneous or induced abortion? Will these laws stop women from seeking the necessary medical treatment they need after such an event? Do we really want this kind of police state?

Further, if women do not have power over their own bodies, if the state can force a woman to undergo the stress of pregnancy and the pain of childbirth against her will, what stops the state from mandating that everyone donate blood and bone marrow or organs? How long before postmortem organ donations are mandatory?

This self-evident inalienable right to one’s own body can also be an argument against military conscription. I certainly hope so because I look forward to the day when they give a war and nobody comes. The inalienable right to have power over one’s own body can also be the basis of an argument against the war on drugs, a war that cost Breonna Taylor her life.

Once we are clear on the self-evident inalienable right to power over one’s own body, then many other discussions become clearly irrelevant to the matter of abortion. If so-called pro-life women want to call themselves feminist, so be it. Whether or not Susan B. Anthony approved of abortion or not is irrelevant. If Margaret Sanger, founder of Planned Parenthood, supported the eugenics movement, so what?

People who are serious about ending abortions or who want to make them rare ought to help women gain access to free contraception. Perhaps more women would choose to give the gift of birth if they have greater access to health care, equal pay, a living wage, a universal basic income, affordable quality housing and child care.

We are living in a moment of great social stress even crisis. A global pandemic has taken the lives of more than 180 thousand people in the United States; millions of people in the United States alone have lost their jobs; many are facing hunger and homelessness, demonstrations against police killings and excessive force against Black people continue into their fourth month. When we think of the inalienable right that women have to control their own bodies and reproductive decisions, this is not disconnected from the human right of every person to be safe from police officers acting as judge, jury, and executioner on the streets. This is not disconnected from the human right to food, shelter, healthcare and a basic income.