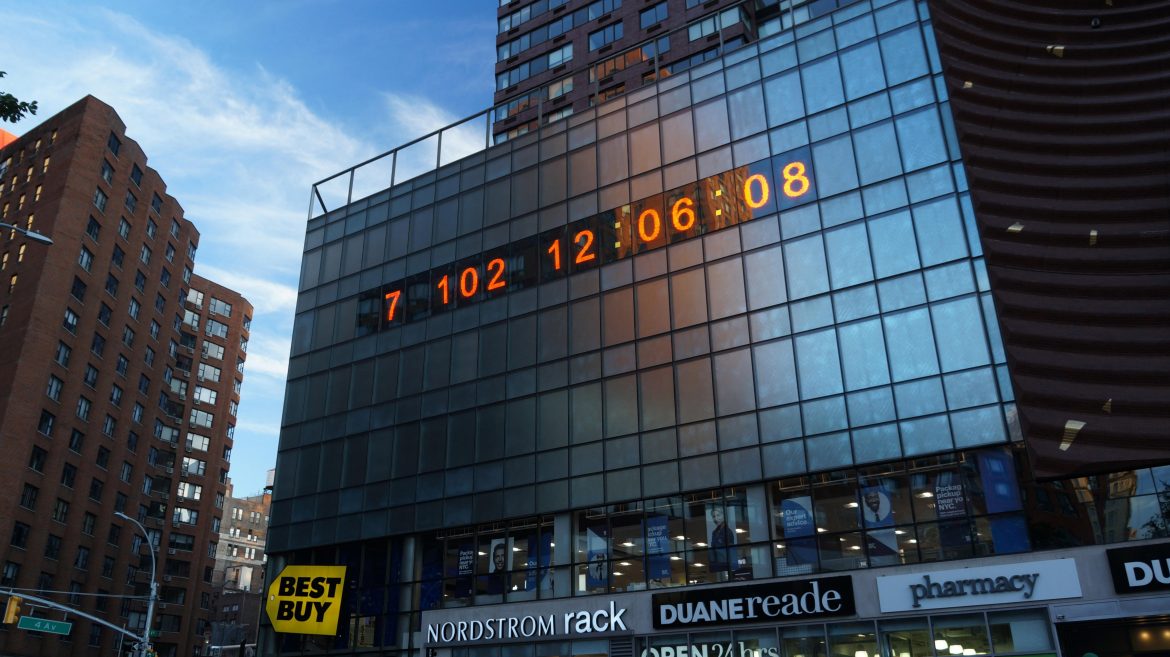 As the liturgy of the Days of Awe reminds us:

On Rosh Hashanah, Saturday, Sept. 19, the iconic Metronome clock in Union Square was repurposed as a giant Climate Clock, an 80-foot-wide digital display that keeps track of our remaining time window to take urgent action on climate change. As East Coast Jews turned to daven mincha at 3:20 p.m., the message “The Earth has a deadline” appeared on the display followed by the numbers — 7:103:15:40:07 — representing the years, days, hours, minutes and seconds until that deadline.

What is the nature of a deadline? It focuses attention, it forces priorities, and it calls action to the fore. Any accounting of time helps us recognize it as a finite resource, and a valuable one. Add to that the pressing sense of mortality that both the Climate Clock and the Days of Awe transmit, and we might truly, as the psalmist says, be able to cultivate some wisdom: our time is limited, we are vulnerable, what we do now matters.

Even those who have not set foot in a synagogue for decades probably remember those chilling lines read only on Rosh Hashanah and Yom Kippur: that in this season it is decreed who shall live and who shall die. Who by fire and who by flood.

With fires raging across the West Coast, five hurricanes churning in the Gulf, sea levels rising, drought impacting food supplies, to name but a few current climate-related catastrophes, the clock communicates a clear message: we literally have no time to waste. If we want to survive we have to change our ways not just on a personal but on a collective level, rethinking our entire approach to energy production, mobility, consumption and sharing of resources.

Change is possible. That is the other great message of the Days of Awe. In order to change we must focus on three axes: teshuva, shifting how we feel and think about things; tefila, improving how we speak; and tzedaka, altering what we do. Together, we remind each other every year at this season, these have the power to ‘rewrite the evil of the decree’ - and under-regulated extraction and a mentality of appropriative consumption have certainly decreed evil consequences for our biosphere and our species.

Perhaps counter-intuitively given the urgency of the moment, the first step is actually teshuva: changing how we relate to things internally.

The Climate Clock is a powerful piece precisely because it communicates to us that we still have time. We still have time to make a difference to how the future will play out. The Climate Clock helps us do teshuva, changing how we feel and frame and relate to things internally, precisely because it challenges the thought-forms of hopelessness, alienation, despair. The massive Climate Clock in the middle of Manhattan helps remind us we’re not powerless. It shows us visually that it is NOT too late. We have seven years to turn this around.

Thus this new monumental clock, launched on the “birthday of the world” could, in fact, help prevent the death of the world.*

Just as the shofar is blown on Rosh Hashanah to announce that Yom Kippur, the day of reckoning, is just 10 days away, the Climate Clock is alerting us to a global countdown. If we continue at our current rate of emissions, scientists are telling us, in seven years we will lock in 1.5°C of warming, with a cascade of catastrophic impacts on humanity and the planet. As we slow emissions, we buy ourselves a little more time, time in which we can in turn begin to actively reverse global heating.

While the clock is a monument, it’s also a movement. It’s not just to keep other people accountable, such as CEOs of big oil companies or elected officials; it’s primarily to keep ourselves accountable. On Yom Kippur we ask: who has not sinned amongst us? We speak in the plural, to stay responsible. By owning up to our participation also as part of the problem, we keep alive the reality of the fierceness of the challenge.

The shofar is a sound of rupture, and a rallying cry. It is also a signal of freedom, for it is the shofar that is blown on Yom Kippur every 50 years to announce the Yovel, the Jubilee, a time of freedom, release from debt, redemption. The Jubilee is the big Reset button for society, and in fact the word yovel itself means ram’s horn.

While we sound the shofar every day for the month leading up to Rosh Hashanah, it is actually not blown between Rosh Hashanah and Yom Kippur, even though what we are building to is the final “Tekiah Gedolah!” blast as the Day of Atonement culminates. This is our annual miniature Jubilee, our cyclical re-set and release of karmic debts.

Right now, during these seven days between the Start of the Year and the Day of Atonement, there is an eerie silence, the quiet of the countdown, knowing something big is going to happen at zero. Will zero be ground zero, like the midnight of the Doomsday Clock?

Or will zero be a Jubilee, a grand refashioning, a “Great Turning” - collective liberation?

Truly we might wish each other a gmar tov: a good ending.

Like the Biblical Jonah, Climate Clock co-creators Gan Golan and Andrew Boyd describe themselves as “reluctant prophets,” both deeply influenced by their Jewish family roots. Boyd says he was compelled by a moral imperative to “try to save the world, though you are not expected to succeed at it,” alluding to Pirkei Avot 2:21. For Boyd, the project is a form of tochecha, a sacred rebuke. “People are relieved that someone is putting the number out there so starkly. It’s as if they’re saying, ‘Ouch! But thank you!’ It’s a very harsh deadline. But what a gift, strangely, to know it, than to not know it.”

For Golan, creating this larger-than-life stopwatch and acting in time is profoundly personal: “Our daughter, Naya, was born just one week before the IPCC released its devastating report on how little remaining time we had left to make progress on climate change, before the catastrophic effects became irreversible. I had already been an in-the-trenches climate activist for years, but this grounded my perspective in a wholly different way. What we did in the next few years would determine the world my daughter would live in, that all of us would live in, and I felt that timeline needed to be understood by everyone, everywhere.” Golan’s words echo against the theme that permeates the scriptural readings for Rosh Hashanah: that of longing for children, sacrificing children, and wishing for our children to outlive us. From Hagar to Sarah to Hannah to Rachel, who weeps for her lost children and will not be comforted, this ancient human concern ripples through our collective consciousness.

In ancient times, Jews would light fires from hilltop to hilltop to signal new months and the coming of major holidays. In our day, while smoke signals heralding climate chaos may abound, Golan and Boyd are hoping that this NYC clock, installed during the United Nations General Assembly meetings on climate change, will be the first of many displayed in cities across the world, helping to synchronize us to global action on a shared global timeline. Amidst the potential ‘distractions’ of a pandemic and a heated election season, syncing up on the urgency of climate action is imperative.

It’s oddly appropriate that the Climate Clock repurposes the ‘Metronome’ installation created in 1999: like a metronome, its consistent tick, tick, tick slices and dices time, reminding us, like Psalms 90, that every moment counts. What we do with each day matters. Every fraction of a degree matters. Every little bit of warming that we can prevent could mean millions of human lives saved, and a lifeline for thousands of species otherwise doomed to extinction. Our planet has a deadline. But we can turn it into a lifeline.

May we embrace the biggest challenges

we have ever faced, draw them close,

May we turn our faces to the sun

and let hard times ripen in us,

until we are bursting with juice,

until we are blackberries among the thorns.

May we have a sweet year of struggle. Amen.

The Climate Clock in Manhattan is part of a larger project that includes a website that explains the science, an open-source DIY “maker-kit” so schools can make their own clocks, and a phone app. The Climate Clock is a project of Beautiful Trouble. www.ClimateClock.world

*What we really mean is that civilization and the biosphere as we know it have a deadline. The planet will continue orbiting the sun for the foreseeable future, and it will presumably also continue to host some life forms.

Kohenet Rabbi Sarah Bracha Gershuny is a writer, ritualist, musician, healer and teacher. She is on a mission to transform human consciousness through direct spiritual transmission and fierce joy. @JewCPriestess