I am the Hindu wife and daughter-in-law in a very secular Jewish family. My father-in-law fasts on Yom Kippur, and my mother-in-law gathers her flock around her on Passover and Rosh Hashanah, but that is the extent of their religiosity. My youngest son Satya (I have two older sons from my first marriage) is half-Hindu and half-Jewish, and has more exposure to Hinduism than Judaism.

The first time I attended Passover Seder with the family, my older sons Akash and Gautama were 7 and 10 respectively, and Satya was still a few years from being born.  After carefully listening to the story told of the Israelites being enslaved by the Pharaoh and their being chosen for God’s protection and emancipation, Akash asked out loud, “What would the Egyptians have to say about this story?”  I held my breath to see if my new family would be offended, and was relieved when the whole family erupted in laughter. Of course, this story has become family legend. 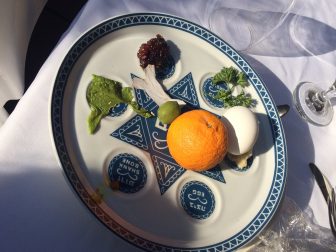 Image of seder plate courtesy of the author

For many years our family used the ubiquitous Maxwell House Haggadah, but over the years Stephan and his brother David have created more progressive and thoughtful Haggadahs which are written in light of our mixed-race and mixed-faith family (I am Indian Hindu and my sister-in-law is Italian Catholic).  Their Haggadahs also address the conflict between Israel and Palestine and include prayers for peace and self-determination of the Palestinian people. Like many progressive Jewish families, our family adds an olive and an orange to the Passover seder plate – the olive for the Palestinian people and the orange for the rights and inclusion of women and LGBTQ+ people in all aspects of society.

As Passover approaches this year, I have been thinking about the significance of this tradition in my life. I cannot separate my thoughts about Passover from the loving welcome I have received from my Jewish American family.  I was a divorced Indian Hindu woman with two young children, and yet from that year 15 years ago till now, there has never a moment of hesitation in the family’s support and love. My in-laws have traveled to India with us twice, and are incredibly curious about my world.  I in turn have taught my children that the heart of our Hindu faith and tradition is inclusive and pluralistic. In fact, the most central teaching of Hinduism is that we are all one. Vasudaiva Kutumbakam: the whole world is one family.

It therefore feels very natural that over the years I have lovingly overlaid the Passover story with my own stories with the result Passover feels more personal; more mine.

For instance, the story goes that the Pharaoh is afraid that the Israelites are becoming too powerful and decides to kill all the first-born sons in the land.  Moses is the first-born son in an Israelite family, and the family saves his life by sending him down the River Nile in a basket. Moses is raised by an Egyptian princess who loves him as her own.

In the Mahabharata, Karna, is born out of wedlock to a princess (Kunti) who sends him down the River Ganga in a basket, and is raised by a mixed caste family that loves him as if he were their own son.

Moses and Karna are both raised with love in families and communities not their own.  And in both examples, we see that family is not defined by birth and blood, and that love doesn’t recognize boundaries of socially constructed systems like race, religion and caste.

I would go so far as to say that for me, hope lies in those moments when we have truly connected with someone different from ourselves.   Perhaps the only way to eradicate hatred for the other is to: 1) connect across difference, embrace each other’s traditions, eat together, love each other and make mixed families together; and 2) reimagine our traditions to be more inclusive and egalitarian.

My organization, Sadhana: Coalition of Progressive Hindus, is doing this by reimagining Hindu scripture, rituals and teachings to align with the central Hindu tenet: We Are One. And my mixed race, mixed faith family is doing this just by existing!

Sunita Viswanath is co-founder of Sadhana: Coalition of Progressive Hindus, and organization which is building a platform for social justice-minded Hindus. (www.sadhana.org)