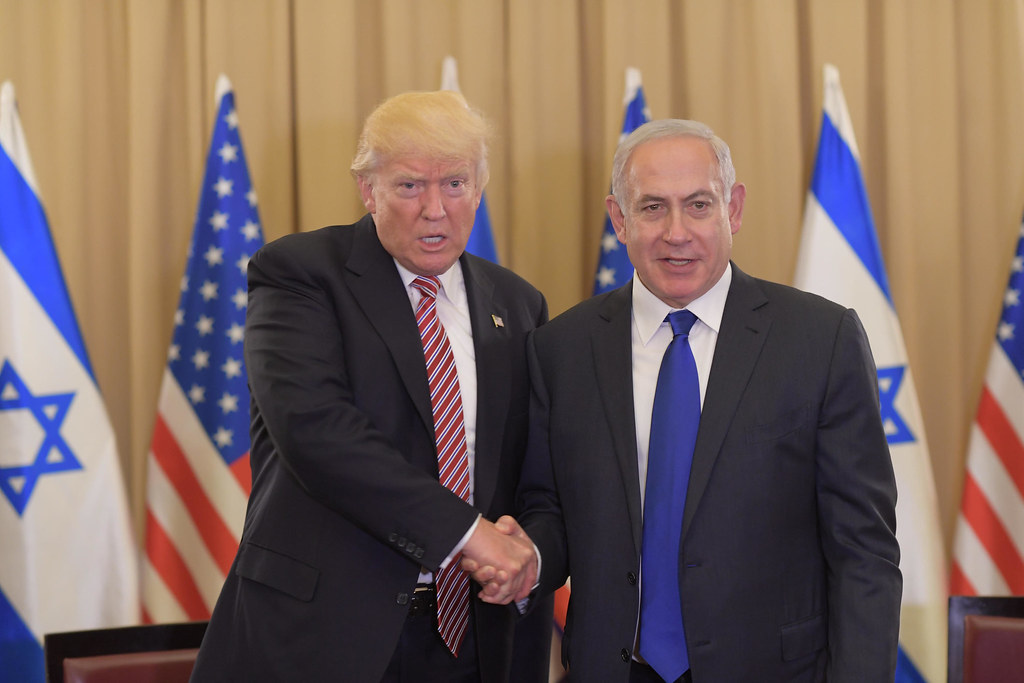 "Trump Visits Israel" by IsraelMFA is licensed under CC BY-NC 2.0

Beginning with full disclosure: I am an Israeli living abroad. Many of my family and friends live in Israel. I have opposed the Israeli occupation  of the West Bank and Gaza since 1972; when I was 17 I refused to serve as a soldier in the Gaza Strip. I have continued working for peace and justice between Israelis and Palestinians. I am also the child of a deeply Zionist American Jewish family. My great grandfather, who was the Chief Rabbi of Philadelphia, was one of the founders of the American Zionist movement and my Grandfather was president of the Zionist Organization of America. I grew up breathing in Zionism.

I believe that the Trump-Netanyahu “peace proposal” is a disaster. The attempt to implement it would set back all hope of peace in this troubled region for decades. An ordinary reader of the document must conclude that this is a plan for the establishment of a Bantustan that requires the complete submission of all Palestinians to Israel.

Some context: roughly 600,000 Israelis live in 230 settlements in the occupied West Bank. Approximately 2.6 million Palestinians live in the same area. Most of these settlements are located in the Jordan Valley, which, under the “peace proposal,” would be annexed outright to Israel, with US backing.

Under the Trump/Bibi plan the Palestinians give up most of the land of the West Bank. The Palestinians keep Gaza and some pieces of the Negev desert. All the settlements and the Jewish only roads remain Israeli. These three areas would be connected by tunnels and bridges, some crossing the Jewish-only roads.

All international crossings would be controlled by Israel. Palestine cannot have an airport, port, or a navy. The proposed Palestinian statelet wouldn’t even have air, water, or mineral rights. All of Jerusalem would remain Israeli and Jews will be allowed to pray on the temple mount. The Palestinian capital would be relegated to the Jerusalem suburb of Abu Dis.

Finally for all this, Palestinians would give up the right to return and be required to recognize Israel as a Jewish state. This extinguishes all Palestinian aspirations to justice and statehood.

Unsurprisingly, Palestinians around the world have predictably rejected this “peace plan” This plan must fail. Then why was it proposed?

I believe that the plan was proposed to satisfy the nation political constituencies of these two deeply unpopular right-wing politicians, each heavily implicated in government corruption, and who are likely to be defeated in their respective countries. Although both Trump and Bibi are secular men; their core support comes from religious evangelical fundamentalists. Trump’s Christian evangelist supporters call themselves “Christian Zionists,” while Netanyahu’s core support is drawn from a number of different religious nationalist factions comprising a movement called the Block of the Faithful, Gush Emunim.

It is important  for Jews to recognize that Gush Emunim is essentially a religious nationalist messianic movement. The core belief is that Jewish “redemption of the land “ is necessary to bring Yom HaMoschiah; the days of the Messiah and the resurrection of the dead. This is one of the major differences between most settlers and the Black Bloc Harredim.  Ironically their core beliefs seems analogous to Sabbatai Zevi’s messianism.

Christian Zionists believe that Jewish control of the land of Israel and the rebuilding of the Temple in Jerusalem are necessary for the second coming of Christ. Thus both groups, for their separate reasons, believe that God wants Jewish control over all of “Greater Israel”. By affirming these fundamentalist dreams, Trump and Bibi hope to satisfy their core supporters.

Moreover by blaming the failure of this plan on the Palestinians both Bibi and Trump believe they can justify Israel’s pending annexation of the Jordan Valley. This “peace proposal,” from which no peace could possibly come, becomes the justification for the wholesale annexation and dismemberment of Palestine. This will lead to more Israeli attacks against Palestinian resistance. Furthermore, in Israel, right-wing parties continue to call for the expulsion of all Palestinians from both the Occupied Territories and from Israel itself.

I fear for the people I love, and I grieve. Cry, my beloved country.

Sarah Levinthal Shartal is an Israeli who settled in Canada and who works with disabled people who are homeless and marginally house.