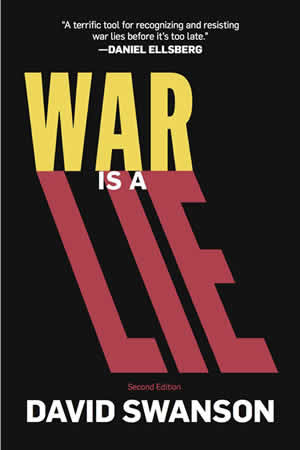 In the park today I saw a teenager watching two little kids, one of whom apparently stole a piece of candy from the other. The teenager rushed up to the two of them, reprimanded one of them, and stole both of their bicycles. I felt like it was my turn to step in at that point, and I confronted the bicycle thief. “Excuse me,” I said, “what makes you think you can commit a larger crime just because you witnessed a smaller one? Who do you think you are?” He stared at me for a while, and replied: “the U.S. military.”

There is no crime larger than war. There is no way to legalize it. The Kellogg-Briand Pact bans it, and the United Nations Charter bans it with narrow exceptions that have not remotely been met by any of the U.S. wars of the past 17 years. A small crime cannot justify a larger one. In 2002-2003 Iraq could have had all the weapons the warmongers were lying about. Or it could have not had them. It didn’t make the slightest difference legally, morally, or otherwise in justifying a war.

Now, Syria could have used chemical weapons. Or it could not have. The question is not uninteresting or amoral or unimportant or boring, but it is completely and utterly irrelevant to the question of war.

So, yes, it’s fun to point out how often they’ve lied and how they lack any proof of their claims and so forth. But do so with the understanding that you’re being played, you’re being manipulated into conceding that if they ever can make a case that some crime has been committed, that will justify them in killing large numbers of people and risking global apocalypse.

It won’t. The problem is not that Trump wants to start a war before the inspectors can determine whether a war is merited. War cannot be merited. There is no such thing as mass murder getting justified by someone else committing murder with the wrong type of murder weapon. This is ludicrous nonsense.

Imagine if whenever 12 people were killed with a bomb or guns the “International Community” had to kill the nearest 20,000 people with poison gas. Why is the reverse so acceptable? It shouldn’t be. It isn’t legal or moral or decent or popular enough for the warmongers to let us have a public vote before they do it.

Trump’s threat of war — the threat itself — is a violation of the UN Charter, which Congress pretends does not exist, but which the U.S. Constitution makes the Supreme Law of the Land along with every other treaty that the United States is party to.

But those Congress members telling Trump he cannot commit the crime of continuing and escalating one of his many wars without Congress, are obliged to act — and not by “authorizing” the crime. Rather, they are obliged to prevent it — and not to wait and punish it after the fact. The tool available to them is impeachment and removal from office. The list of impeachable offenses is not exactly lacking.

There are some people I know of who have not been falling for the media manipulation. They are people who’ve read War Is A Lie.

David Swanson is an author, activist, journalist, and radio host. He is director of WorldBeyondWar.org and campaign coordinator for RootsAction.org. Swanson’s books include War Is A Lie.