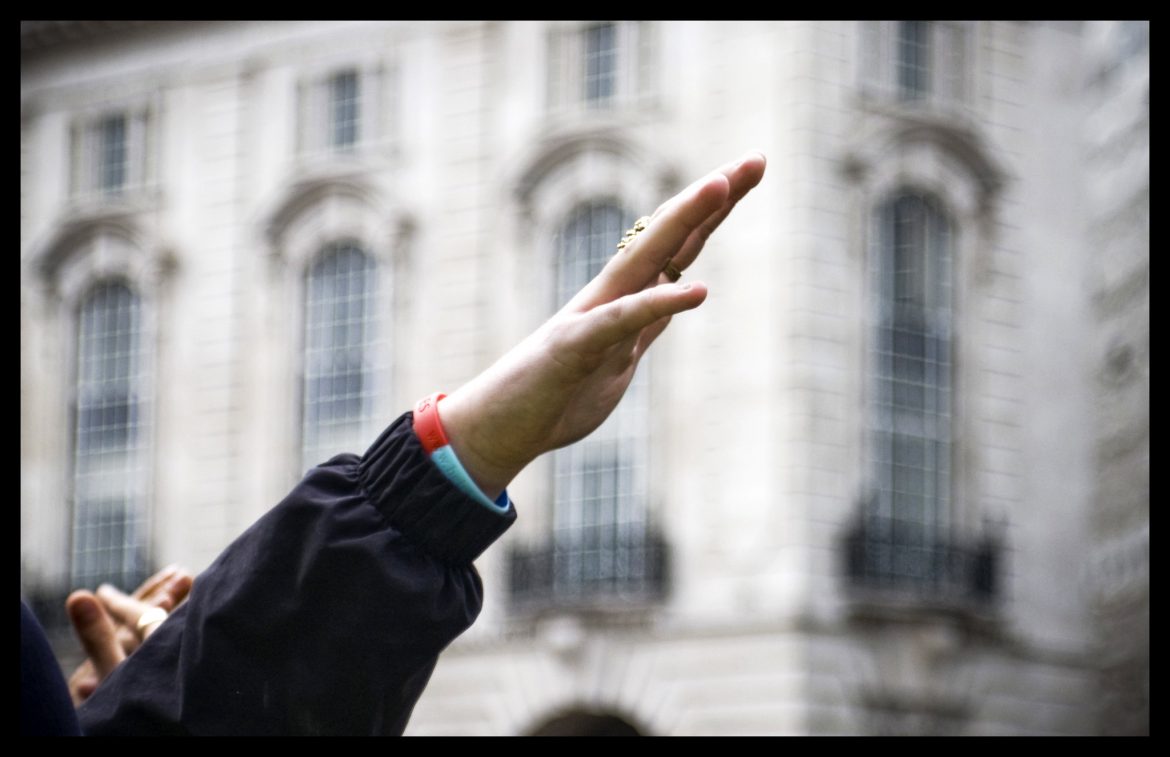 Just a year ago Ellen Engelstad and Mímir Kristjánsson suggested there is a Return of Judeo-Bolshevism. Two years earlier, in 2017, Neo-Nazis in Charlottesville, Virginia (USA) shouted: "The Jews will not replace us!" They are white nationalist and Klu Klux Klan gangs who believe that Jews seek to replace the Aryan race in America—not with Jews but with blacks and non-white minorities. Insofar as they have any ideology aside from sheer bigotry, they believe in something called Judeo-Bolshevism, a concept within the broader spectrum of antisemitism. Judeo-Bolshevism is the repugnant belief that Jews invented communism. Soviet-style communism or Stalinism is gone, but the idea of Judeo-Bolshevism refuses to go away writes Paul Hanebrink in A Spector Haunting Europe, echoing the opening of The Communist Manifesto of Karl Marx and Friedrich Engels.

In the paranoid fantasies of Judeo-Bolshevism, Jewish communists and Jewish financiers work hand in hand to achieve world domination. Historically, Judeo-Bolshevism began its unsavory career shortly after the Russian Revolution in 1917, and it was quickly transmitted into Western Europe and the USA by those escaping the young Soviet Union. Just about a year after the revolution, two leading German revolutionaries, Rosa Luxemburg and Karl Liebknecht, were brutally murdered by fascist Freikorps, mercenary fighters. Even though Liebknecht wasn't Jewish, the militants believed otherwise. Stupidity merged with the conspiracy theory of Judeo-Bolshevism. Later these so-called free corps became the Nazi SA or Sturmabteilung (Storm Troopers), a private army of goons led by Ernst Rőhm.

Crucial to the antisemites' notion of Judeo-Bolshevism is the so-called "unmasking" of Jews in Communist parties. This unmasking happens everywhere even though most Communists aren't Jewish and most Jewish aren't communists. Historical inaccuracy aside, myths and magic thinking work within simplistic categories. Judeo-Bolshevism is not only a phenomenon in three former Warsaw Pact states –Poland, Ukraine, and Romania. Judeo-Bolshevism reaches well beyond that.

The example of the Soviet Union is telling. While Jews made up 50% of the Menshevik (social-democrats and reformers) leadership, only six out of the twenty-one Bolshevik (minority communist) leaders where Jewish. Given that Russian Jews in the years up to 2017 were most likely intellectuals (intelligentsia) rather than peasants, this is a surprisingly low number. They were also more likely to live in Moscow than in remote villages; and were more likely to be among the persecuted people hunted and tortured by the Tsar's secret police, the feared Okhrana.

However, undeterred by facts, the proponents of Judeo-Bolshevism rest their case on three pillars: firstly, the old religious argument built on a long history of associating Jews with heresy, misrule, and social disharmony; secondly, the slander and libel in the fictitious Protocols of the Elders of Zion, a belief in a Jewish conspiracy that secretly runs the world; and finally, the false belief in the politics of fear – that is, the influence of Jewish fanatics, such as newspaper moguls, political progressives and elite academics who seek to ruin the world by fomenting panics, such as the COVID-19 pandemic.

For the conspiratorial theory of Judeo-Bolshevism to work, communism had to be single-handedly invented by the Jew, Karl Marx – even though he was a baptised Christian – and then imposed on Czarist Russia by a handful Jewish so-called extremists who created the Russian Revolution. During the civil war immediately following the Revolution, Russia's counter-revolutionary forces – known as the Whites – began to link Jews to Bolshevism, the Reds. The Whites argued that a Jewish conspiracy would destroy Christianity. They claimed that wherever Bolsheviks appear, 90 out of 100 are Jews.

In line with the fact that between 1918 and 1921, there were more than 2,000 pogroms with the majority of them in the Ukraine. Ukrainian antisemites also believed that Jews carried out communist political activities and helped the Red Army by hiding weapons, undertaking acts of sabotage, or generally sympathizing with Bolshevism. They asserted that Judeo-Bolshevik sabotage became an excellent opportunity for looting.

By 1920, conspiracy theories in Poland about Bolshevism reached near hysteria. Meanwhile, antisemites in Bessarabia screamed their belief that there is no case of corruption, communist propaganda, or espionage, etc. where the Jews are not discovered. At that time, the short-lived Hungarian revolution was crushed. At the end of the Hungarian revolution, Hungarian counter-revolutionary fascist murdered approximately 3,000 people - half were Jews. Additionally, about 70,000 people were jailed or "concentrated" in "camps" for years, and roughly 100,000 were forced into exile.

In many cases, Judeo-Bolshevism agitation occurred as a mixture of antisemitism and ultra-national. An even more hideous mixture of antisemitism, Judeo-Bolshevism, and nationalism exploded into Nazism. At least partially, Judeo-Bolshevism made Adolf Hitler. Also contributed to Hitler were his race-based and widespread antisemitism not specifically Judeo-Bolshevism. Nazism also arose because of the generous support of German capital seeking a way to control Germany's communist party and progressive trade unions. German Nazism came at a time when Weimar Germany's democratic institutions were weak, and the remnants of Prussian conservatism (Franz von Papen, Hugenberg, Hindenburg, etc.) were happy to put Hitler into power. This historical fact is often ideologically camouflaged as merely a Machtergreifung (seizure of power), instead of a deliberate eradication of democracy by Germany's conservatives.

By the summer of 1920, the imaginary threat of Judeo-Bolshevism started to become a more constant theme in Hitler's speeches. Hitler's Nazis argued that only he and his Nazis could protect the German people, das Deutsche Volk –to which Hitler as an Austrian national did not belong– from Judeo-Bolshevism. In the years before Hitler's rise to power, Joseph Goebbels never tired of emphasizing his pathological hallucination that Jewish-Marxist power rules Germany. In the conspiratorial mindset of German Nazis, Judeo-Bolshevism was everywhere. It was evident in Munich's 1919 revolution; it was active in Spain's Civil War; it was the dominant force among the ruling elite in Moscow; and so on.

The Judeo-Bolshevism obsession of the Nazis proclaimed that in Germany, we Germans remain masters in our house! – not Judeo-Bolshevik Sovietism. Such a paranoid fear of Judeo-Bolshevism was hardly unique to Germany. In many other countries that did not have Nazi parties in power, the Catholic Church also conjured up l'idée fixe of Judeo-Bolshevism. They were happy to continuously associate Jews with Bolshevism. Right-wing Catholic circles made sure of this. Even more nonsensical was l'idée fixe that communism is the imperialism of the Jews.

With Germany's invasion of Poland in 1939 and the signing of the Hitler-Stalin Pact came another antisemitic ideology. It was the conspiracy theory that Poland was the victim of the Soviets, the Nazis, and the Jews. Two years later, when Germany invaded the Soviet Union, Hitler's propaganda minister Joseph Goebbels noted on the task in front of him, now it is time to put on the anti-Bolshevik phonograph record again. Gradually, so that the transformation does not seem too sharp. Goebbels was a grandmaster of propaganda – today; it is called public relations.

With that, the Nazis cranked up its propaganda machine, returning to the conspiracy theory of Judeo-Bolshevism. Nazism also cranked up an associated myth, what Hitler and his cronies labelled the Final Solution to the Jewish Question – Endlösung der Judenfrage – or the extermination of Jews. In that formulation, the implications for Soviet Jews were especially dire. Indeed, Judeo-Bolshevism was crucial to the genesis of the Final Solution.

The history of antisemitism and Judeo-Bolshevism is peppered with many accompanying episodes. To highlight one episode that occurred in Odessa - when Odessa finally fell to the fascist (October 1941), Romanian forces slaughtered 25,000 Jews in reprisals against the Judeo-Bolshevik enemy.

In many cases, Judeo-Bolshevism merged Germans and their helpers even more strongly. As German forces entered the Soviet Union, Judeo-Bolshevism became the rationale for targeted mass killings of Jews. But ironically once the Red Army had liberated Eastern Europe including Germany, the conspiracy theory of Judeo-Bolshevism carried on in countries that came under Soviet communist rule.

During Poland's infamous Kielce pogrom (4th July 1946), locals believed that a Jew is a Bolshevik. They thought that Jews are hated because they were propagators of communism in Poland. Some also spoke of Bolshevik KZs [concentration camps] in an attempt to trivialize the horror that was Auschwitz. Still, Stalin's Gulags were not death factories for the extermination of the entire Jewish race. This never existed in the Soviet Union.

Meanwhile, elements of Judeo-Bolshevism continued well into Germany's post-Nazi period when West-German Chancellor, Konrad Adenauer, declared that Asia stands on the Elbe. He conjured up the same fear of Asiatic Bolshevism that Goebbels and Hitler had ingrained into the Germans during the previous twelve years of relentless propaganda.

Judeo-Bolshevism also continued in post-World War II Hungary, wherein 1951, the communists declared their intention to resettle members of the former ruling class. About 15% to 20%, and perhaps as many as 30%, of the forty to sixty thousand deportees to the countryside were Jews. The difference between Hungarian Communism and German Nazism is that the one deports you to the countryside – the other to Auschwitz.

Perhaps one of the most clear-sighted concepts capable of explaining Judeo-Bolshevism, antisemitism, anti-democracy, and right-wing populism in today's Eastern Europe comes with this. Hungarian antisemitic nationalists thought that Hungarians are forced into reverse assimilation. Their hallucination goes as far as to believe that it is no longer the Hungarian nation that wishes to assimilate the Jews. Today, the liberal Jewry wishes to assimilate the Hungarian nation. For that purpose, it possesses a more powerful weapon than it has ever possessed, namely the parliamentary system.

This absurdity explains the rise of antisemitism and right-wing extremists in Hungary and throughout Eastern Europe, including East-Germany, the continuation of anti-democratic sentiment and the election of right-wing populist governments. In short, the conspiratorial myth of Judeo-Bolshevism had entered deeply into the memories of many in Eastern Europe. From there, it continually makes a re-emergence and thus encouraging right-wing populism and antisemitism.

Notes: Hanebrink’s Judeo-Bolshevism is published by Belknap. The article follows the spelling of the word “antisemitism” as suggested by Lipstadt in Denying the Holocaust.

About Thomas Klikauer and Norman Simms

Thomas Klikauer is an academic based in Sydney who teaches MBA students and writes on management, the media, and Germany (klikauer.wordpress.com).

Norman Simms is a retired academic who lives in New Zealand and continues to write articles and books, as well as editing an online journal.