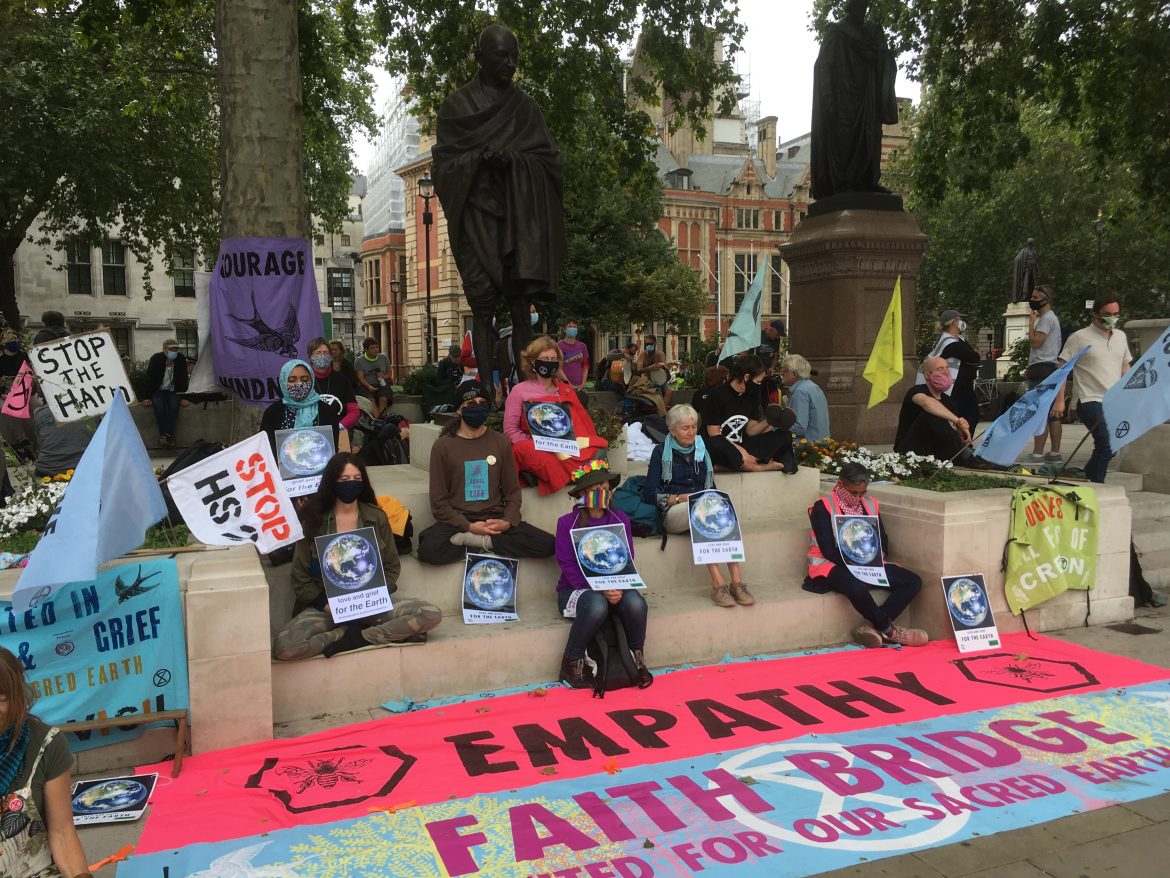 For five months the world-wide climate catastrophe has been pushed into the background by the impacts of Covid-19. I am a grandfather, deeply disturbed that this urgent concern of great danger is receiving so little attention. Christian Climate Action, of which I am a member, is currently preparing to return it to the forefront of public and government consciousness during the Extinction Rebellion protests beginning 31st August. This article is also prompted by the fact that the Bishops of England and Wales are preparing to update their 2002 Call of Creation. In their statement published on 15th August last year (Guardians of God’s Creation) they outlined their recognition of the potential catastrophic consequences of climate change and they quoted Pope Francis’ comment on the illusion of unlimited (economic) growth on a planet with finite resources.

An ongoing plea of Francis is that we listen to both the cry of the earth and the cry of the poor. These two cries are incorporated in Catholic Social Teaching as care of the earth and the common good. I have long regarded his two major statements of these issues in Evangelii Gaudium (Joy of the Gospel) 2013 and Laudato si (Praise be! Care of our Common Home) 2015 as complementary, with the former focussing primarily upon the common good and the latter upon care of the earth. Many responses to these cries rely almost exclusively upon Laudato si so Francis’ critique of the global economy is left out. To rectify that I draw upon both, but give more space to Evangelii Gaudium.

Climate breakdown is inextricably related to the current economic system. For 25 years the UN COP meetings have failed in their commitment to achieve an annual reduction in CO2 emissions. Each year the global economy has either grown or flatlined and emissions have synchronised with that. This year however the effects of Covid-19 have produced a dramatic fall in emissions worldwide.

IPCC scientists state that the carbon budget for a 66% chance of staying within the 1.5C target, will, at recent emissions rates, be used within 10 years. (1). Instead of emissions falling steeply, they reached record highs in 2018 and 2019 (2). According to the International Monetary Fund the global economy grew by 3.6% in 2018 and was, before the arrival of the Coronavirus, forecast to continue growing by 3.5% in 2019 and 3.6% in 2020 (3 and 4). While the global economy is currently in steep decline, the overall ethos of relying upon growth as our security shows no sign of lessening. But as Christians our security can only rest upon our obedience to God.

Pope Francis’ critique of the Global Market Economy and evidence which supports its accuracy.

Francis describes the global economy in this way: ‘‘The worship of the ancient golden calf (cf. Ex 32:1-35) has returned in a new and ruthless guise in the idolatry of money and the dictatorship of an impersonal economy lacking a truly human purpose’’. (EG para 55).

He is particularly concerned about the effects of the economy upon poor, exploited and marginalised people: ‘‘We have to state, without mincing words, that there is an inseparable bond between our faith and the poor.’’ (EG para 48).

The following passages can hardly be more explicit about the injustices inherent in this economic model: ‘‘…today we also have to say ‘‘thou shalt not’’ to an economy of exclusion and inequality. Such an economy kills. Today everything comes under the laws of competition and the survival of the fittest, where the powerful feed upon the powerless.’’ (EG para 53). ‘‘…some people continue to defend trickle-down theories which assume that economic growth, encouraged by a free market, will inevitably succeed in bringing about greater justice and inclusiveness in the world. This opinion, which has never been confirmed by the facts, expresses a crude and naive trust in the goodness of those wielding economic power and in the sacralised workings of the prevailing economic system.’’ (EG para 54).

Far from promoting trickle-down, the inequality and exclusion is gross. Oxfam’s research, based upon Credit Suisse figures, shows that 8 billionaires own the same wealth as half of the world’s population (7).

This growing inequality is no accident. The interlinked international financial and economic organisations of the World Bank, International Monetary Fund and World Trade Organisation are now major forces in promoting both riches and poverty. This was not so when they were set up but as Neo-Liberalism took hold in the 1970s and 80s, a massive amount of unused capital was made available to poor countries. This quickly resulted in unpayable debts which were responded to with Structural Adjustment Programmes (SAPs), programmes which continue to this day. (8&9). An inevitable accompaniment of these has been the undermining of democratic participation within the affected countries. Severe indebtedness has again returned to many of them. This return demonstrates the way in which the international financial and economic system continues to disadvantage the poorest countries.

SAPs and WTO trade agreements have removed many policies of environmental protection in poor countries and this deregulation process has been promoted across the world. Francis states it thus: ‘‘In this system, which tends to devour everything which stands in the way of increased profits, whatever is fragile, like the environment, is defenceless before the interests of a deified market which become the only rule’’. (EG para 56). Just how defenceless is shown by the Intergovernmental Science-Policy Platform on Biodiversity and Ecosystem Services report in May 2019 which estimated that about one million animal and plant species are currently threatened with extinction. (11).

The human family is now using the Earth as though we have access to 1.75 planets. (12). Ls para 106 goes to the heart of this overuse: ‘‘…the idea of infinite or unlimited growth which proves so attractive to economists, financiers and experts in technology … is based on the lie that there is an infinite supply of the Earth’s goods, and this leads to the planet being squeezed dry beyond every limit.’’ This still-escalating process is marked by Earth Overshoot Day (see ref 12) which last year was on 29th July. Francis commented: ‘‘What shocked me is that from July 30th we started to consume more resources than the planet can regenerate in a year…. It’s a global emergency’’. (13).

Francis links the economy directly to violence: ‘‘Today in many places we hear a call for greater security. But until exclusion and inequality in society and between peoples are reversed, it will be impossible to eliminate violence….This is not the case simply because inequality provokes a violent reaction from those excluded from the system, but because the socio-economic system is flawed at its root.’’ (EG para 59).

There is much in Francis’ critique which those who promote the current economy do not want to hear: ‘‘How many words prove irksome to this system! It is irksome when the question of ethics is raised, when global solidarity is invoked, when the distribution of goods is mentioned, when reference is made to protecting labour and defending the dignity of the powerless, when allusion is made to a God who demands a commitment to justice.’’ (EG para 203).

A subject which is almost entirely off-limits in mainstream media is voluntary de-growth of the economy. The following in Ls para 193 brings it to the fore: ‘‘We know how unsustainable is the behaviour of those who constantly consume and destroy, while others are not yet able to live in a way worthy of their human dignity. That is why the time has come to accept decreased growth in some parts of the world in order to provide resources for other places to experience healthy growth.’’.

The political and economic processes which I have referred to are comprehensively covered in Jason Hickel’s The Divide. (14). For a recent critique of economic growth see Positive Money’s The Tragedy of Growth. (15).

I have been inspired on my path to faith by the commitment to God and the poor of many bishops, priests and lay-people in Latin America, Africa and Asia who were murdered by political and economic elites. One of them was Saint Oscar Romero of El Salvador to whom CAFOD gave considerable support. He spoke and lived these words: ‘‘A church that does not provoke crisis, a gospel that does not disturb, a word that does not touch the concrete sin of the society in which it is being proclaimed – what kind of gospel is that?’’. (16). His words and actions witness to the depth of faith involved in taking decisions regarding the political, ecological and economic path to which Pope Francis calls us. Persecution by those with power is likely when we follow him and St. Oscar in these political-economic concerns. I pray that our Church will be on fire with the same passion displayed in the writings of Francis so that its members will take whatever risks are necessary to keep God’s Earth safe for those who follow us. Catholics working within the Extinction Rebellion movement need the fullest support we can be given in fulfilling this task.

I am hugely concerned about the depleted and damaged earth which my grandchildren and their generation are predicted to inherit. I regard the proponents of the Neo-Liberal philosophy and economy as having primary responsibility for this destruction through their pursuit of never-ending growth on a finite earth. In response I co-founded Christian Climate Action in the UK, through which we are committed to take or support non-violent civil disobedience.