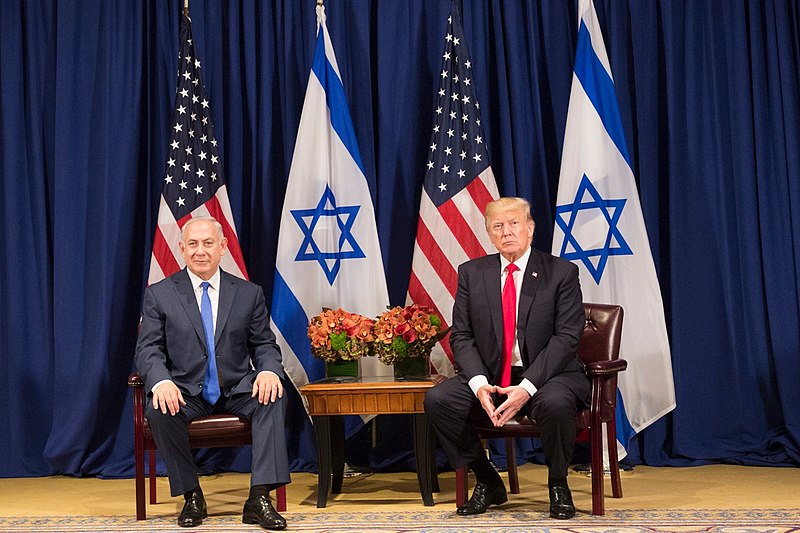 Image courtesy of The White House/Wikimedia.

By now most Tikkun readers know that Benjamin Netanyahu failed to assemble a Knesset (Israel’s parliament) majority. Although his Likud party received more votes of the Knesset than any other party, it actually won only 35 of the 120 seats in Knesset, and with only 15,000 more votes than that of the “Blue and White” (Kakhol veh Lavan) party headed by former IDF chief Ganz who came so close in part because many of the liberal Israelis who want peace with the Palestinian people and an Israeli prime minister untainted by corruption charges left the labor party and voted for Ganz even though Ganz was making strong anti-Palestinian statements all through the campaign. Ganz also won 35 seats, but since the tradition is for the President of Israel (a powerless position except for having the power to choose who gets chosen to try to form a government) chooses the highest vote getter to try to form a government coalition, Netanyahu was given more than a month to put together a governing coalition.

To do that, Netanyahu turned to many of the ultra-right parties and to the religious parties to form a coalition. The ultra-right religious parties have no trouble joining a coalition government with whoever wins the highest number of Knesset seats. ­These are not to be confused with “modern orthodox” who have much less interest in controlling the  religious life of the society the way the ultra-orthodox do, but are the major ideological champions of holding on to and expanding West Bank settlements without regard to the pain they inflict on the Palestinian people, or how much they daily violate the most frequently repeated injunction of Torah (to LOVE the Stranger/the Other/ha’geyr and to have only one law for both the Jewish citizen and this Other).

A very large segment of Israelis resent the special privileges of the ultra-orthodox have managed to secure as condition for joining any government coalition (including that of the Labor Party in the days when that part was still socialist in orientation), and this gave an opening to Avigdor Lieberman, the head of a secularist yet in all other respects  extremist right-wing party Yisrael Belytenu, to insist that they would only be part of Netanyahu’s coalition government if he eliminated the exemption from the draft of the ultra-Orthodox.

Note please that this was a classic opportunist move. There are only a small number of students getting this exemption, and at this point the IDF has more recruits than it needs, and approximately 50% of those who are of drat age actually enter the IDF. Lieberman was not asking to eliminate the more egregious sins of the ultra-orthodox:  1. refusing to allow women to hold a community service at the Wall to read Torah on Rosh Chodesh (the new moon)  2. banning conversions except those performed by Orthodox rabbis and lately not recognizing even some American orthodox rabbis 3.  forcing Israelis who want to get married to either go through a religious ceremony or fly outside the country to get married, 4. preventing many converts from becoming Israeli citizens because they are not considered “real Jews” if  they don’t have an orthodox conversion) 5. Getting the state to pay for the education of their Yeshiva students while it does not pay for the secular education most Israelis seek.   The hatred of the Ultra-Orthodox by a large section of the Israeli population is so extreme that Avigdor Lieberman has momentarily become a national hero to many, and that may make his party get a much larger section of the population voting for him in the next election in September.

Wait, you might ask, why is there another election. Why did the Knesset vote to disband itself a few hours after Netanyahu had to admit he could not form a new government? The reason that many of the current Knesset members, elected just two months ago, voted to disband is that the right-wingers amongst them were fearful that President Rivlin might immediately ask former IDF leader Ganz to form a government, and that might have meant some liberalization of some policies (though highly doubtful it would have led to any serious change in the way Palestinians are treated in the West Bank and Gaza).

So now, Israel faces a new election which it might produce Avigdor Lieberman either leading the government (less likely) or (more likely) be part of a government that had agreed to some of his more extremist plans against Palestinians, and with only symbolic denials of ultra-Orthodox power (but them still having power in the many other ways besides military.

It is hard to understand why the secularists in both Left and Right never agreed to create a government of national unity to reduce the power of the Orthodox and take away their rights to control so many important aspects of Israeli life. But more interested in getting power than in changing that religious power over personal life of Israelis, the political parties have never taken that move, instead seeking to include the ultra-orthodox in their coalition governments. So Lieberman was the first politician to be willing to lose a place in government to appear to stand up to the ultra-orthodox and possibly gain huge electoral strength as a result. And that could be an even worse disaster than Netanyahu!

As Ha’aretz columnist Gideon Levi pointed out,  “Lieberman’s statements show that he’s far more of a benighted racist and nationalist than Netanyahu. But for those who want Netanyahu’s head, this is no time for a rational ..., Lieberman initially supported ‘transfering’ the Palestinians, then eventually replaced it with forcible land swaps, in order to ensure a majority in Israel for the chosen people. He dreamed up loyalty oaths as a condition for citizenship. He opposed the disengagement from the Gaza Strip. He has threatened to bomb Egypt’s Aswan Dam and assassinate Hamas leader Ismail Haniyeh. He’s a fan of the death penalty for terrorists. He has compared the Yesh Gvul anti-occupation organization to kapos in Nazi concentration camps. He has blamed the left for all of Israel’s fallen and all of its troubles.” These are reasons why not everyone is going to rally around Lieberman.

But we can’t underestimate the disdain many have for Netanyahu. Ha’aretz columnist Bradley Burston clarifies why so many people are angry at Netanyahu apart from his refusal to recognize the rights of the Palestinian people. According to Burston, Netanyahu is “ a man with no honor. None. Here is a man whose every word, every facial expression, every argument, every belief, is a false front. There is not one cell of principle in him. You needn’t look any deeper than his eyes: His life is falsehood and hatred. His work is falsehood and hatred. His legacy is falsehood and hatred.Of literally thousands of examples, one will suffice. The full 10 years of Netanyahu’s unbroken rule have been marked by inaction and broken promises to rescue the relatives of Ethiopian Israelis from starvation and threats of violence in Ethiopia. In recent days, however, a desperate Netanyahu sent word to newly elected MK Gadi Yevarkan that if the Ethiopia-born lawmaker agreed to desert his centrist opposition Kahol Lavan party and become the deciding 61st vote to ratify a new Bibi-led government, the prime minister would name him immigrant absorption minister.The message to Yevarkan was clear: Agree to the deal, or the thousands of family members — some of whom have waited decades in Ethiopia for rescue to Israel — will remain as hostages to a government callous as concrete to their plight. Under Netanyahu, Israel itself has come to stand for falsehood and hatred. His campaign could not have been more straightforward: Without exception, anyone who does not vote for him is of The Left and therefore a trafficker with Arabs, who are themselves, without exception, ardent backers of terror. All of them, Jew and non-Jew alike, are Uncitizens. They are not, cannot be, part of The People .Except, of course, for those who vote instead for the Kahanists, the pedophile protectors, the subjugators and apartheidists and faux believers in the rule of law, who have all agreed to take his bribes and breach the public trust in return for backing the laws that will exempt him from going to trial and prison for bribery and breach of the public trust.” (read the full article by Burston at: https://www.haaretz.com/israel-news/elections/.premium-israel-elections-netanyahu-darkest-deepest-fear-just-came-true-1.7303674.)

He sounds like Trump. Which is why Trump, embracing neo-fascist leaders around the world, can be counted on to try some tricks to win the Israeli voters back to Netanyahu before the September election in Israel.

Is there any real alternative path for Israel? Yes. I refuse to endorse those on the American Left who see Israel as nothing but a “colonial venture now turning to apartheid and ethnic cleansing to hold their power.” That way of talking has had the same impact in Israel that Hillary Clinton’s calling half of Trump’s supporters “a bundle of deplorables” had on Americans—sealing people’s support for the Right because they feel hated by the Left. Although my book Revolutionary Love, coming out in October, is about changing the politics in the U.S. (and by implication, the UK, France, Germany and other advanced industrial countries, its analysis can easily be applied to Israel as well. I still see the possibility of a different kind of Israel as I do a different kind of U.S. than what we have under Trump  I’ll write about that in the next issue of Tikkun on line. Please subscribe at www.tikkun.org/subscribe.