A third party the Dems and GOP can get behind: Alzheimer's Party

UsAgainstAlzheimer’s, a nonprofit devoted to stopping the progression of Alzheimer’s by 2020, is calling to unify around the "Alzheimer's Party." (NJ Advance Media wire services)
PrintEmail

My role in life has been to cancel my husband's vote. George grew up in Colorado – God's country as he calls it – where being a Republican is served with mother's milk.  I, on the other hand, was raised in New Jersey, the Garden State, populated with people who, after hearing both sides of every argument, chose to be Democrats.

And then we met each other and, well, somehow in the heat of passion I forgot to ask about party affiliation. Not that it would have been a deal breaker since I assumed that once we married I could break George's silly habit of voting with the elephants. Wrong, wrong, wrong.

This was particularly mystifying since we generally share the same values.

But then we found our true purpose in life. In 2010 we started UsAgainstAlzheimer's, a nonprofit devoted to stopping the progression of Alzheimer's by 2020. This is what our goal is and we are making progress.  And, happily, that goal has solved our split party problem as well. 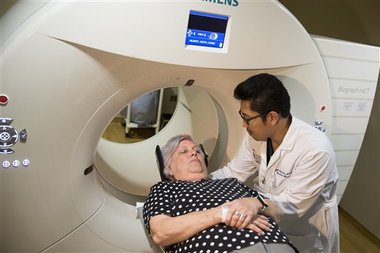 Alzheimer's disease is a problem expected to grow in the years ahead.

Now we are neither Democrats nor Republicans. Now we are The Alzheimer's Party.  Just as this disease is equal opportunity: Ds or Rs; rich or poor; male or female, African-American, Latino or white — we all are at risk.

So now I have to look at current and former presidential candidates with my Alzheimer's tinted glasses. Who has Alzheimer's in his or her family?

So Alzheimer's is pretty well represented in the would-be presidential candidates group, at least by Republicans. That's a hopeful sign because once you have seen Alzheimer's up close and personal — once you have watched a loved one disappear into the unforgiving chasm of the disease — you will fight to find a cure.

That is what can happen if we don't invest in research to stop this unforgiving disease.

Most of the candidates agree we need a cure. Carson has said we need to devote more resources to it; Rubio envisions a Manhattan Project to address Alzheimer's; Trump said it would be a top priority; and Cruz recently said that spending on research and development should dramatically increase, though he did not specify how much.

When asked about Alzheimer's, Bernie Sanders generalizes that all disease need more research.

Of all the candidates, Hillary Clinton is the only one who has addressed Alzheimer's with a concrete plan. The Alzheimer's Party loves her strategy.

As she has said, "If we're the kind of nation that cares for its citizens and supports families, respects our elders, and takes care of our neighbors, then we've got work to do.  And we need to do better when it comes to diseases like Alzheimer's."

I can see 15 million sure votes here — and that's just from caregivers of the 5.4 million Alzheimer's sufferers.

But it's still early. Other candidates can also announce a plan to stop Alzheimer's.  I eagerly invite them to do just that. Consider this: right now Alzheimer's costs the U.S. over $200 billion a year and, yet, we're spending less than $1 billion on research. Crazy, no?

If you think research is expensive, try disease.

Trish Vradenburg is the co-founder of UsAgainstAlzheimer's. She was raised in South Orange, New Jersey. She is the former publisher of Tikkun magazine.