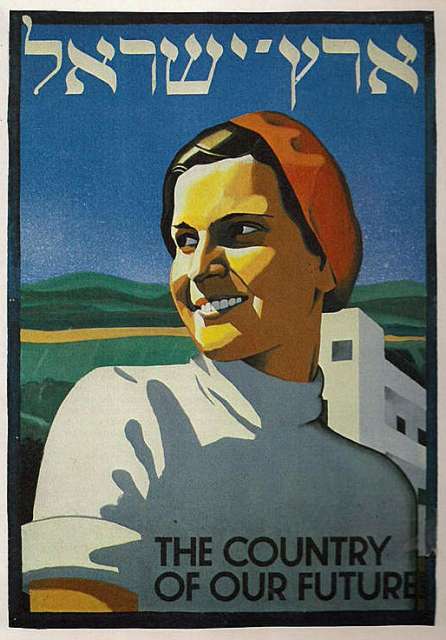 The space between the Jordan River and the Mediterranean Sea has become the place Eretz Yisrael through the power of the Zionist narrative. Palestinians, however, have a very different and compelling narrative. Credit: Franz Krausz / Palestine Poster Project Archives.

When I was fourteen, I discovered a “South Carolina Israelite,” Barry Farber, on nighttime radio. Although Farber believed the Jews should have their own state, he wondered why it had to be situated among their enemies. Why not a Jewish state on friendly soil, on the sparsely populated plains of Wyoming?

The answer, of course, was that the land that is now Israel is much more than a space on the globe for Jews; it is a place. “Space” is mere area, a location of specific dimensions; space, or area, can be measured and a number assigned to it. Space becomes a “place” when it acquires a human significance, something immeasurable in quantitative terms. Israel’s land is meaningful to the Jews because of the story Jews attach to it: the Jewish Narrative.

The Palestinians, it must be noted, have their own narrative. It is the story of deprivation of the land their families worked for generations. This deprivation has become the core around which national aspirations have formed. Palestinians’ identity now consists in their being the people dispossessed by Zionism. Even if negotiations could settle the other issues that divide them, the conflicting narratives of Israel and the Palestinians would defeat a two-state solution because each side regards its narrative as constitutive of its identity.

This conflict of narratives quickly spirals into an endless debate about whose narrative most strongly endows a tiny space with meaning, and about whose meaning should take priority. As the dialogue drags on, many urge Israel to forego the niceties of narrative and focus instead on the concrete matter of drawing lines. Narratives, they argue, are luxuries that Israel can ill afford. Besides, once your borders are secure, you can tell whatever story you like. John Kerry has urged Israel to negotiate borders and let go of the Narrative.

Netanyahu, however, continues to insist upon the story he views as the sacred core of Jewish identity. According to this story, the evolution of a ragtag mob of exiles into a morally mature nation is tied to a divine promise that links Jewish identity, both personal and national, irrevocably to one specific parcel of land. This promise is what made the Israelite nation a bona fide state, and what now supports the Zionists’ claim that they were merely “returning” to what was, and had always been, theirs. If Jewish identity truly does rest on this story, surely Israel can never concede it.

What, exactly, is the story that makes this little sliver of land crucial to Jewish identity? Some of the Torah story is myth, but most of it purports to be history. It begins with the Patriarchs from whom all Jews are supposed to descend, and moves forward to the Passover story of people fleeing their oppressors and, during a forty-year period of desert wandering, taking for themselves a deity to whom they are uniquely related, and a set of laws that bind them as the people of that promissor god. They will have a land of their own if they can become a moral beacon for the other nations.

What marks the Jewish Narrative from its outset is that the Israelites are always on the move. They must constantly fight to live on land that belongs to others, a homeless people seeking a place to call home. Many a Torah chapter recounts the skirmishes and larger battles the Israelites wage until they become a fierce warrior tribe. When, at last, they look across the Jordan toward the promised land, their god warns them to avoid the false idols of the people who already live in that land. He describes the wells, roads, and walled cities they will encounter, and cautions humility because “You did not build that!” Finally, the Israelites cross over and spread out in the land, and that concludes the Jewish Narrative.

The truly unique Jewish contribution to civilization is a non-corporeal, non-locatable deity, that is everywhere and nowhere. Credit: Benjamin West/ Wikimedia Commons.

This often bloody Narrative is of people forging relentlessly toward what was, at the time, one of the dandiest pieces of real estate in the region: fertile valleys, abundant lakes, cool forests, and a length of advantageous seacoast—the filet of the neighborhood. But, along the way, and even at their destination, they are the only people who have no land of their own; all they have is a personal deity who has made them exclusively his.

Now, as the Jewish Narrative relates, the peoples the Israelites encounter along the way—Moabites, Sodomites, Edomites—all have gods who are exclusively theirs. Their gods dwell in the lands they protect, ensure good harvests and watch over their inhabitants. In real estate parlance, the tribal gods “run with the land.” These gods occupy places of honor upon the land, sacred spots atop mountains, in temples, on golden thrones. Only the god of the Israelites is homeless!

There is now an alternative narrative, brought to light by archaeological research. In this version, the “Israelites” were not a single group who “left Egypt.” Rather, there occurred throughout Mesopotamia, around the time of the Exodus story, a series of climatic crises that produced enormous agricultural and economic failures throughout the region. Monarchies crumbled, despots were overthrown and, in the ensuing chaos, oppressed minorities fled.

People escaped into the wilderness from various directions. Archaeologists have discovered a place in the Sinai where they might easily have met up. The local god in this region, according to stone carvings found there, was known as… “Yahweh.” It is likely that some of these wanderers pooled their resources, formulated laws to insure peace among themselves, and took as their common god the local god, Yahweh.

To forge an even more powerful bond, they might also have devised a story of common origins, a tale of descent from a single ancestral line. Perhaps they urged their children on with a story of a land that would someday be their own, supporting their tale with claims of a divine promise. A more secular account, but one leading to the same place as the Narrative: a nation of landless people who believed they would someday find a home.

Had these people remained in the wilderness with the original Yahweh worshippers, they’d have become one more nation with an in-dwelling god. But, as they chose to continue journeying, they could not domicile their god in any single location. And so, the Jewish god does not dwell anywhere. He is everywhere and nowhere. See, e.g., Burning Bush, Pillar of Smoke. But see, most significantly, the Second Commandment!

Every schoolchild learns that the Hebrews’ greatest contribution to civilization was monotheism. The singularity of the deity is announced in the First Commandment. But even the polytheistic Egyptians always had one C.E.O., a unifier atop the pyramid. This is true of most polytheisms; it reflects a human need to organize experience into a coherent whole, the same impulse that drives science toward a unified theory.

The truly exceptional Jewish contribution to civilization is, I would argue, not the First Commandment but the Second Commandment, in which God instructs his people that he cannot be seen or even imagined. Number Two announces a non-corporeal, non-locatable, deity that defies representation, a god that cannot dwell in any land.

The Homelessness of the Jewish God

Jewish identity was constructed by a people on the hoof, an itinerant nation. It is not surprising, then, that the Jewish deity is portable. The conception of Yahweh as placeless reflects the Jews’ sense of their identity as essentially homeless.

But the homelessness of the Jewish deity is in no way a defect. The Jewish concept of the divine in fact represents a radical intellectual advance over previous notions. In the Second Commandment, Yahweh says, in effect, “If you can climb a mountain to see and touch your god, you do not doubt your god exists. But to know Me, you must take leave of your five senses and make a brave leap of faith.” The revolutionary idea conveyed in the Second Commandment is thus the very notion of faith!

But, what of the story about a promised land? What of the Temple, the sacred space the Jews consecrated to their god? The answer, I believe, is that the god of the Second Commandment is an idea that takes much getting used to. The Torah itself often reflects a more naïve, retrograde resistance to the Commandment’s insistence on faith. However, once the real power and meaning of the Second Commandment becomes clear, the idea of the Jewish deity dwelling in an actual place seems heretical.

No less a thinker than Maimonides insisted that the incorporeality of the deity was the single most significant tenet of Judaism, the core of Jewish community, and the key to eternal life. The “promised land” is a device that creates the Narrative’s dramatic arc: the “journey to the promised land” keeps the reader reading. But, ultimately, the Narrative is the powerful story of a homeless people who, from the agony of their homelessness, invented the idea of a placeless deity, and thereby created the enduring idea of faith!

The Narrative that ties Jewish identity to a specific piece of land is, in fact, heretical; at the very least, it ignores the best idea the Jews bestowed upon the world, the notion of faith. Israel should abandon the Narrative and instead get down to equitably dividing up the space.

Susan Pashman, a former attorney, is a philosophy professor who teaches aesthetics at Boston Architectural College. She is the author of the novel, Upper West Side Story, forthcoming in May from Harvard Square Editions. She lives in Sag Harbor, New York.