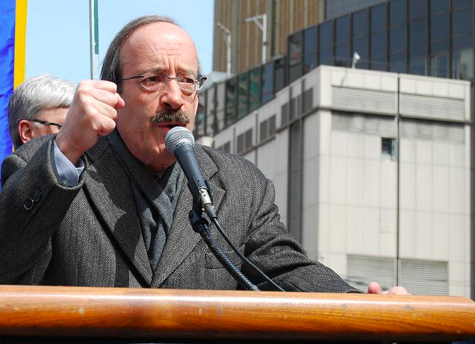 Congressman Eliot Engel, Democrat of New York, currently the ranking member of the House Foreign Affairs Committee, will likely be the choice of the Democratic Party leadership to chair that influential committee when the new Democratic majority comes to office in January. In that role, he will serve as the Democratic Party’s most prominent figure on foreign policy.

On many key issues, Engels’s views are closer to that of Republicans than the majority of his fellow Democrats.

Unfortunately, on many key issues, his views are closer to that of Republicans than the majority of his fellow Democrats. Indeed, the prominent pro-Trump neoconservative activist Morton Klein has praised Engel’s likely ascension to the chairmanship, describing him as someone “who fully understands the truth of the Arab-Islamic war against Israel and the West.”

In order to frighten Americans into supporting a U.S. takeover of Iraq, Engel falsely claimed just prior to the 2002 war authorization vote to invade Iraq that the Iraqi government was still producing chemical and biological weapons. He was among a rightwing minority of Congressional Democrats who voted to authorize the illegal, unnecessary, and predictably tragic U.S. invasion of that oil-rich country.

More recently, Engel worked successfully to kill a Democratic-sponsored 2017 measure that would have ended U.S. support for Saudi Arabia’s bombing of Yemen, which has killed many thousands of civilians and threatens millions more with starvation and disease.

He was one of only a handful of Democrats to oppose the Iran anti-nuclear agreement. Meanwhile, he has supported the abrogation of U.S. and international legal restrictions on exporting nuclear technologies to rogue nuclear weapons states like India.

In addition, Engel has opposed the withdrawal of U.S. forces from Afghanistan, has called for expanding NATO to include Ukraine and Georgia, and supportsMorocco’s illegal annexation of occupied Western Sahara, insisting that the United States accept Moroccan sovereignty and deny the former Spanish colony the right of self-determination as demanded by the United Nations and the World Court.

Engel has been particularly extreme and out of line with most rank-and-file Democrats when it comes to Israel and Palestine.

He was an outspoken supporter of Trump’s decision to recognize Jerusalem as Israel’s capital, calling the move of the U.S. embassy to that multi-ethnic city “long overdue.” He opposes any United Nations involvement in the Israeli-Palestinian peace process, and insists the United States should veto any and all U.N. resolutions critical of Israel. He has pushed for defunding the U.N. Relief and Works Agency for Palestine Refugees and he has co-sponsored legislationthat would have jailed those who advocate boycotts, divestment, and sanctions against Israel or even just targeting the Israeli occupation.

Engel has attacked the United Nations, the World Court, and the European Union for raising concerns over Israeli violations of international humanitarian law. He has called for withholding U.S. contributions to the United Nations unless the U.N. retracts accusations of Israeli war crimes. He has insisted that Israel bears no responsibility for thousands of civilian deaths from the bombing of crowded urban areas in Gaza and has called the widespread expressions of concerns about Israeli human rights violations expressed in international fora as being part of “an anti-Semitic agenda.”

In 2010, he defended an Israeli attack on an unarmed humanitarian aid flotilla to Gaza sailing in international waters that killed ten crewmen, five of whom were shot at point blank range and not resisting. He insisted that the boats—with volunteers from such peace organizations as War Resisters International, the International Fellowship of Reconciliation, Jewish Voice for Peace, and Pax Christi—were actually “filled with hate-filled provocateurs bent on violence” who had ties to Hamas and terrorist groups planning attacks on the United States and that the ships filled with food and medical supplies “was really a Trojan Horse designed to attack the Israelis.”

Engel’s views towards foreign policy are militaristic and hostile towards human rights and international law.

Engel does not take these positions because he is Jewish, or because he is a Zionist, or because he represents a district with a large Jewish population. A larger percentage of American Jews (the majority of whom consider themselves Zionists) opposed the Iraq War, oppose the Saudi war on Yemen, and supported the Iran anti-nuclear agreement than did non-Jewish Americans. And the vast majority of American Jews take a more moderate view towards Israel and Palestine than does Engel. Engel takes these positions because his views towards foreign policy are militaristic and hostile towards human rights and international law.

One has to ask why the Democratic Party would have him chair the Foreign Affairs Committee and effectively become the party’s foreign policy spokesman. The Democrats have much to lose and little to gain from this move. It was the higher-than-usual turnout from their progressive base that made it possible for the party to regain control of the House. It is nothing short of a betrayal of the Democratic leadership to turn this important committee over to someone so far to the right. Engel at the helm of Foreign Affairs, will only feed the cynicism—especially prominent among young voters—that there is little difference between the two parties.

It is no longer the case that those with the most seniority automatically become committee chairs. Democratic House leaders Nancy Pelosi and Steny Hoyer could decide to appoint a less right-wing chair. Roots Action and other progressive groups have organized a petition to persuade the Democratic Party leadership to not give Engel the chairmanship of the Foreign Affairs Committee, and to appoint someone without such dangerous views. It is critical that the Democratic leadership hear from their base about the urgency of presenting an alternative to the dangerous militarism of Trump and the Republican Party.

Stephen Zunes is s a Professor of Politics and International Studies at the University of San Francisco, a Contributing Editor of Tikkun magazine, and a Tikkun Institute Fellow.

Take Action & Make Your Voice Heard by Saying No:  Write to your own Congressional representative and make your feelings clear, and also write to Nancy Pelosi and explain to her why this appointment would not be a good way to start the Democratic control of the House.

Stephen Zunes, an Editorial Fellow at the Tikkun Institute, is a professor of Politics at the University of San Francisco.