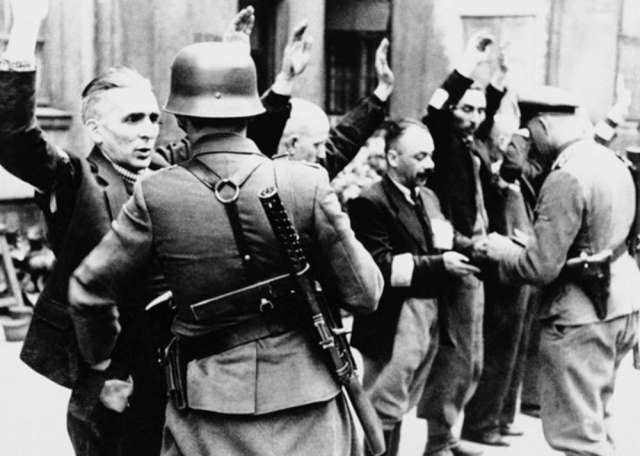 …………………………………………………………………………………………………………………………………………….We’ve We’ve all read the history with horror and with the certainty that it could never happen to us: The rise of Hitler and Fascism in the mid-to-late 1930s, at a time when Germany was suffering an economic depression; the subsequent rise of the Third Reich buoyed by a popular nationalistic movement that included deportation of immigrants and embracing racial cleansing manifested by the sterilization of hundreds of thousands of German citizens deemed unworthy to participate in the future “Master Race;” the extermination of six million Jews in Hitler’s “Final Solution;” and the invasion and occupation of Europe and Russia that ultimately cost an estimated sixty to eighty million lives. If Germany had conquered Russia, another 140 million people might have been sterilized, enslaved, or exterminated as Hitler planned to use Russia as lebensraum or “living space” for his future Master Race. The history books didn’t tell you the whole story. The seeds of destruction that the Nazi’s sowed were not entirely their own ideas. Many were modeled after American policy and on one American scientist’s research of racial cleansing. Indeed, even the swastika, a symbol that has become reviled, was first used in WWI by America’s military.

Have you ever heard of Harry Laughlin? If you haven’t, you should have. Harry H. Laughlin was a prominent American developer of eugenics, the “scientific” field of creating a superior race or species through deliberate selection and breeding and the sterilization or extermination of any individuals deemed unworthy. Laughlin lived in Kirksville, Missouri. It was there that he developed his theory. He studied education and agriculture at Kirksville Normal School (nowadays Truman State University) and he was principal of the local high school for a while. After earning a Ph.D. in cellular biology from Princeton University, he returned to Kirksville where he taught agriculture and continued his research in eugenics, eventually realizing that his experiments on livestock could be applied to the human race. The university even named a building after him, which was demolished in 1986. Because of his affiliation to the university, Truman State University maintains Laughlin’s archives in the Pickler Library Special Collections.

Laughlin became so prominent, in fact, that in 1910 he was appointed superintendent of the newly created Eugenics Record Office (ERO) of the United States. He held the position until 1939. A member of the Human Betterment Foundation, Laughlin was the eugenics “expert” to the Congressional Committee on Immigration and very influential on American immigration policy, especially in vastly reducing the number immigrants allowed into the United States from southern and Eastern Europe—primarily Jewish, Slavic, Italian, and Russian people. Laughlin was instrumental in legislation enforcing the compulsory sterilization of American citizens deemed “unfit” to procreate, especially after the 1922 publication of his Eugenical Sterilization in the United States, which called for the sterilization of the blind and the deaf, the mentally or physically disabled, alcoholics, criminals, epileptics, and the homeless (as if being unemployed or homeless, especially during The Great Depression, implies an individual is made of undesirable genetic stock). In 1932, Laughlin sought to distribute in America certain Nazi propaganda films depicting the success of Germany’s eugenic programs. The American Eugenics Movement was so popular during the 1920-30s, that eighteen states eventually passed sterilization laws based on Laughlin’s theory. Throughout his life, Laughlin advocated the idea of a single world government.

In 1927, Laughlin attended the Fifth Congress in Genetics held in Berlin, as well as a similar conference several years later. Laughlin was widely read and admired by the Nazis, so much so that the Reichstag implemented his theories beginning in 1933 with the Law for the Prevention of Hereditarily Diseased Offspring, sterilizing over 350,000 people in Germany. Hitler embraced Laughlin’s idea of a one world government. In June 1936, amid jubilant celebrations of Germany’s 550years as a nation, the Nazis awarded Harry Laughlin an honorary Doctor of Medicine degree from the University of Heidelberg, citing his research in the “science of racial cleansing.” In November of 1938, with their hateful eyes glaring at the 600,000 Jews living and working peaceably in Germany, the Nazi’s began to fully implement Laughlin’s theory of exterminating anyone deemed “unfit” to exist in the future society of a “Master Race.”

The rest is history.

Harry Laughlin died in 1943 and was buried in a cemetery in Kirksville. Shortly after his death, the American Eugenics Movement was abandoned after it had become associated with Nazism and pseudoscience.

Laughlin’s story is not a just a lesson in history; it’s a cautionary tale. Like America, Germany in the 1930s considered itself to be a Christian Nation. Indeed, of its sixty million citizens, 99% were Christian (Roman Catholic or Protestant; the other 1% were Jewish). In his desire to court evangelical Christian voters, Hitler declared in a speech to the Reichstag in March 23, 1933, that Christianity was among the founding principles of the Nazi Party. He even cast himself as a believer. Not long afterward, the Nazi’s plunged the world into World War II, killing, raping, and enslaving millions, all contrary to Jesus’s decree to “Love your neighbor as you love yourself. There is no higher commandment” (Mark 12:31). America is currently embracing notions of racism and xenophobia akin to the Nazis, condoning armed round-ups and deportations, separating children from their parents, creating policies that reduce the number of immigrants who are not Western European-looking or who practice different religions, contrary to the U.S. Constitution that states that no laws shall be made in regard to religion. The Nazis also dehumanized entire ethnic groups, calling them rapists and criminals. Violence against “The Other” is on the rise. Take for instance the recent wave of anti-Semitic threats and attacks on Jewish synagogues, schools, community centers, and cemeteries, as well as the brutal murders of individuals from India, including peaceable Sikhs, who, through the ignorance of Islamophobia, are mistaken as being Muslim. History shows that overzealous and blind allegiance to a charismatic political leader or party or sense of nationalism is dangerous. Hatred is a powerful thing, as capable of filling up a heart as love.

It is no stretch of the truth to suggest that a line can be drawn from Harry Laughlin and America’s racial cleansing policies of the 1920s and 1930s to the monstrous violence of WWII created by Hitler’s largescale implementation of his policies. The Nazi’s also shouted at first, “It’s economic! They’re taking our jobs!” In a familiar echo of the times, Hitler’s platform was “Make Germany great again!” He stated in a radio address in 1938, “Give me five years and you will not recognize Germany again.” The utter destruction of Berlin, Dresden, and every German city by the end of the war proved that he was right. In such context, is it reasonable to question whether such motivations are economic, or instead, are they really about racial and religious intolerance? Humanity rarely commits evil so completely and fervently as when it is done in the name of nationalism or religion. The 20th century is littered with corpses of racial cleansing. The line between then and now is thin and red. Learn more at the Archives of the American Eugenics Movement.

John Smelcer lives in Kirksville, Missouri. He was a visiting professor at Truman State University, where Harry Laughlin was educated and became faculty and developed his eugenics theory. Dr. Smelcer is currently writing a novel set in Germany at the end of WWII about how easily a charismatic autocrat can lead a nation to its ruin, and how racism, religious zealotry, intolerance, and war corrupts conscience. (Photo of the author in front of Harry Laughlin’s house in Kirksville, Missouri)