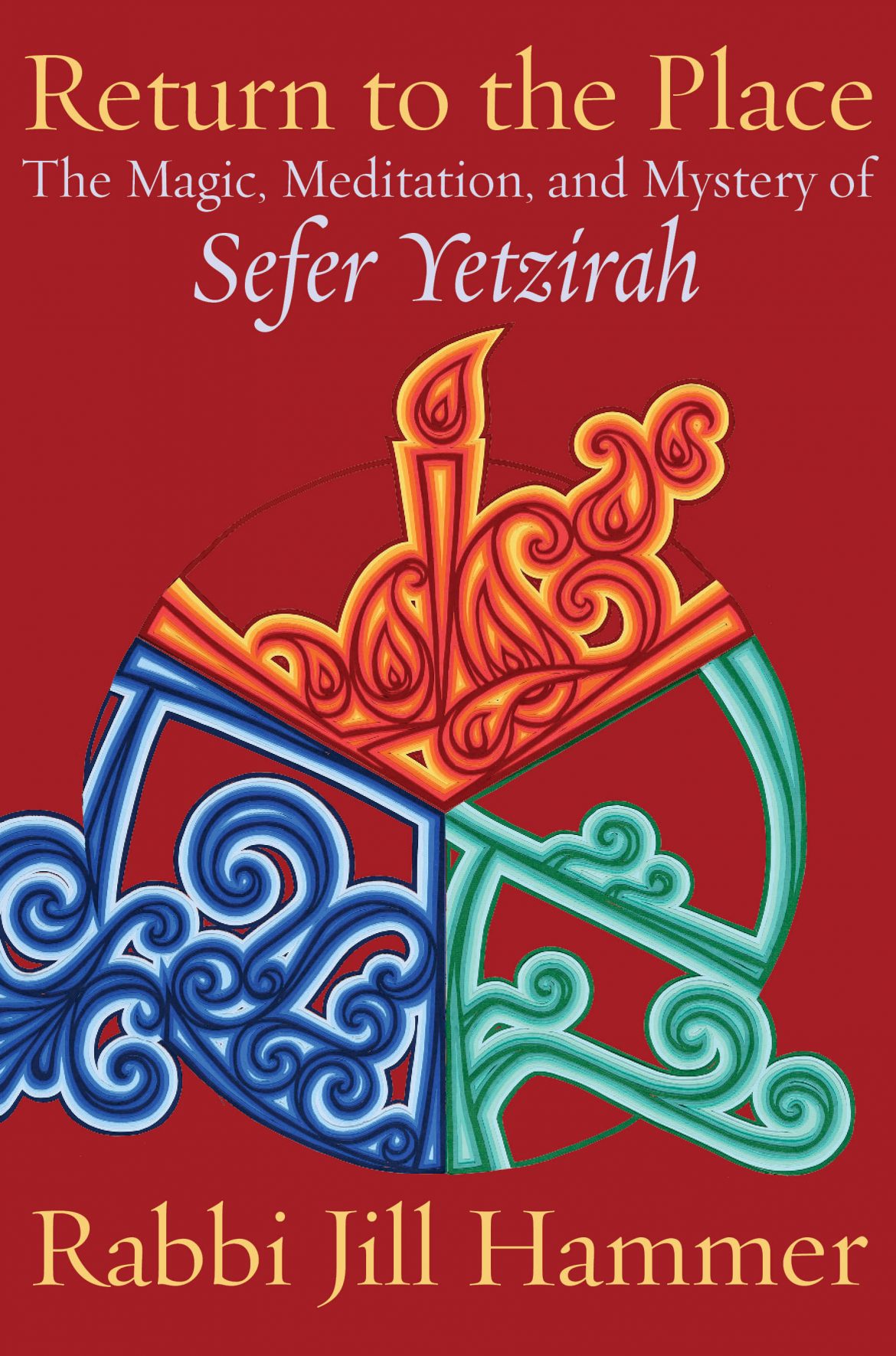 Rabbi Jill Hammer’s translation and commentary on Sefer Yetzirah (“The Book of Creation”) breathes life and passion into this ancient mystical text. Rabbi Hammer’s focus on what Sefer Yetzirah means to us as living readers—on the phenomenology of reading this text now—is both enlivening and captivating. Like Rabbi Aryeh Kaplan, who expertly translated Sefer Yetzirah and other Jewish mystical texts for contemporary English speakers, Hammer gives us access to what at first glance may be seen as impenetrable mysticism. But Hammer has gone several steps beyond Kaplan. She brings to bear the light of our contemporary wrestling with gender, with bodies, with liberation, with simply existing as a human being in relation to the cosmos. Hammer not only creates from this a full spiritual practice. She also gives us an exemplary model of how to communicate scholarship and mystical practice together in one package.

Sefer Yetzirah is one of the shortest mystical texts in Judaism, and the earliest text that articulates the foundations of what evolved into Kabbalah. It is our source for the term Sefirot—an untranslatable concept that combines symbol, potency, divinity, vessel, channel, and more. But the term Sefirot in Sefer Yetzirah doesn’t mean the same thing as it does later in Kabbalah. In fact, little in Sefer Yetzirah means exactly the same thing it does in later Kabbalah. Hammer keeps us acutely aware of this gap, but she does so not to distance us from the text, the way academic scholarship might. Instead, she uses this gap to draw us into the inner Temple of the Cosmos and the Spirit, teasing one insight after another out of the text’s many facets and layers.

Hammer also does two things that in the hands of most authors would pull us in opposing directions at cross purposes. Verse by verse, phrase by phrase, she summarizes scholarly debate about the history and most correct recension of the text, and then gives us a feast of meditations and visualizations, all of which epitomize her very first meditation in the book: “Close your eyes and breathe out. There is a book in front of you. Notice all the details of the book…. Feel the power within it. Open it. When you open the book, you find a door. Pass through the door. You discover a pathway…. At the end of the path, a teacher awaits you.” (10)

This book-teacher is not just Sefer Yetzirah, but the commentary itself. As a model of engaged scholarship, Return to the Place is also one of the finest works I have encountered that communicates not just the content of scholarly debate but the thrill of what it reveals. Hammer skillfully uses that feeling to propel herself and her readers toward her greater passions. Most importantly, Hammer takes from Sefer Yetzirah’s admonition, “[I]f your heart runs return to the Place” (1:5, 31) both the title of the book and the foundation for the meditations and visualizations that appear in every section of commentary.

There are few drawbacks if any to Return to the Place. Perhaps a bigger one, if it can be termed as such, is this: it is the rare reader who can sustain equal interest in both scholarship and guided visualizations. I imagine readers inclined toward one direction or the other may be tempted to pass quickly over elements that are outside their lane. In my case, even though I have some modest experience meditating, I am someone who instinctually resists being led, so I had to make myself pay close attention to the guided visualizations. I imagine there will be some readers who feel that way about Hammer’s discussions of contemporary scholarship. Hammer makes it relatively easy to skip or skim the elements one is less in sync with, but she also makes it well worthwhile to apply oneself to less familiar parts and thereby expand one’s horizon.

And make no mistake, that horizon is not just the mind but also the heart – which in any case was never separated from the mind in ancient Jewish and biblical tradition. Another duality absent from Sefer Yetzirah—and also from biblical tradition—is the distinction between soul and body, which are both called nefesh, which Hammer appropriately translates as “body-soul”. (If you’re curious about the biblical side of that equation, check out a brief summary of the evidence in my book Kabbalah and Ecology.) This duality is otherwise present throughout rabbinic literature. In fact, Hammer takes its absence, along with other features, as evidence that Sefer Yetzirah may come from a non-rabbinic source. Those other features include the book’s lack of gender hierarchy, its belief in a three-element model of the universe rather than four elements, and its emphasis on the details of the body as an expression of divinity. (Based on both Sefer Yetzirah and Shi’ur Komah, the divinity of the body and its bauplan became a distinctive feature of all later Kabbalah.)

Sefer Yetzirah also makes no distinction between Jew and non-Jew. Hammer explains, “Just as Sefer Yetzirah redefines the Temple as the cosmos, it redefines covenant as the development of cosmic consciousness.” (261) Hammer even detects a feminine quality in Sefer Yetzirah’s worldview: “Reality runs…back and forth, between the Creator and the world. When we enter a deeper consciousness, we begin to see this dual nature of the real. There is a placental quality to this running and returning.” (34) Hammer’s clarity about these unique features of Sefer Yetzirah is bracing and enlightening, and it is something not found in other popular expositions of the text.

One may argue whether Hammer reads into the text a commitment to the biosphere and its creatures that isn’t there. While the celestial realm in Sefer Yetzirah is populated with constellations, planets, sun and moon, the only named elements of the terrestrial realm are the segments and organs of the body, presumably of the human practitioner. (For this reason, I turn first to Sefer Bahir and its Cosmic Tree, rather than to Sefer Yetzirah, to ground my own work in Jewish ecotheology.) Hammer acknowledges this problem but could wrestle with it more than she does (233). What Hammer does do, however, is weave animals and trees into the text through her meditations (e.g., 62, 168) and her commentaries (e.g., 4, 172, 213). Hammer’s inclusive perspective enables her to derive extraordinary levels of meaning from the text. Whether or not Sefer Yetzirah embraces “the earth and its fullness,” Hammer’s approach opened up the text for me in an entirely new and beautiful way.

One other thing to note is that Return to the Place does not dwell on the vast corpus of medieval religious commentary on Sefer Yetzirah. This of course is part of Hammer’s method to isolate what is unique about the text, and to separate its meaning from later attempts to square it with normative Kabbalah. But readers wanting to learn more about the text’s medieval career may want to supplement Hammer with Kaplan’s Sefer Yetzirah or, from the academic side, Marla Segol’s Word and Image in Medieval Kabbalah: The Texts, Commentaries, and Diagrams of the Sefer Yetzirah.

For Hammer, Sefer Yetzirah comes to us as an intimate teacher, guiding us to find the sacred Temple within and to unite our consciousness with the divinity in the whole of Creation. There is a calming majesty in Sefer Yetzirah—and in Hammer’s vision of Sefer Yetzirah—that is more needed than ever in our fractured, fractious, socially-distanced, pandemic-pallored, climate-apocalyptic times. Hammer’s Return to the Place comes to us not a moment too soon. As we descend into the darkness of Chanukah and solstice, into the dungeon with Joseph, and into the storm before the (God-willing) calm of the U.S. inauguration, readers will be well-served by escaping our human obsessions to return to the sensually and sensorily real, the cosmic now, through the ancient words of Sefer Yetzirah. We will continue to be well-served by Return to the Place, for years to come.