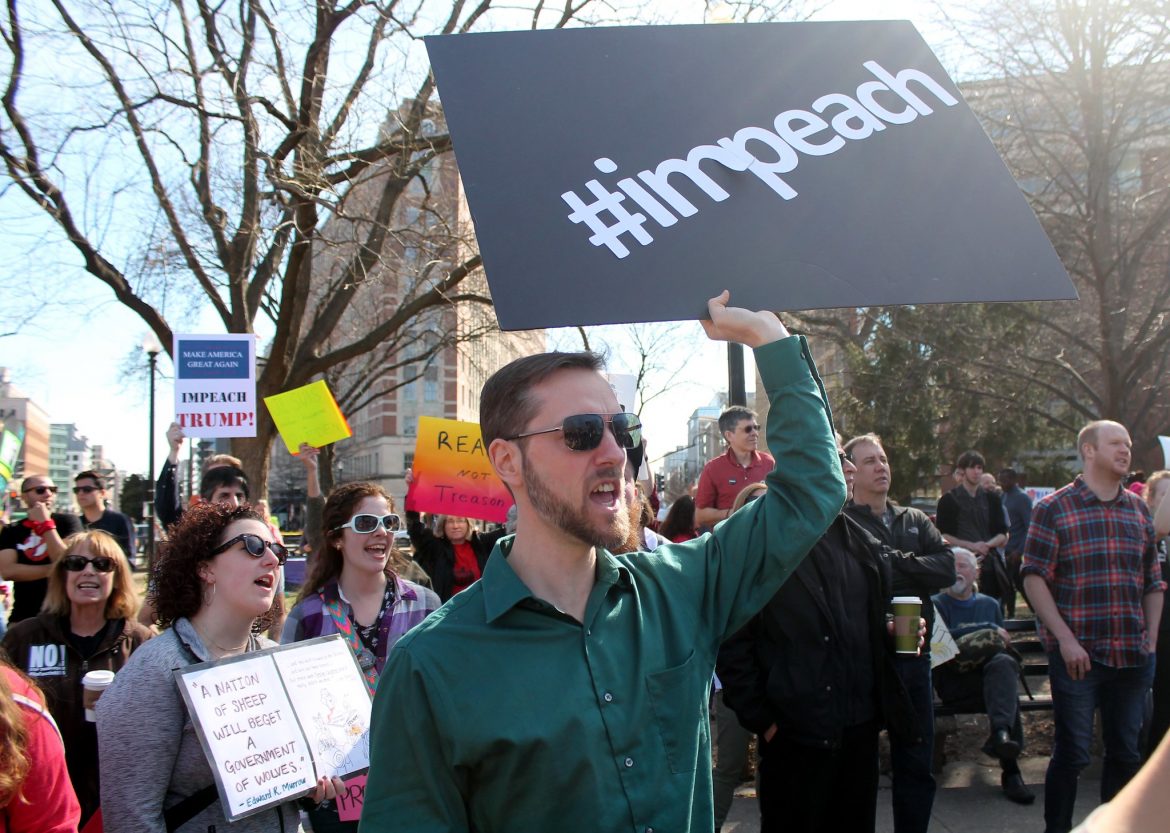 Many pundits have written columns saying that the impeachment of a President is not judicial but political. There have been few, if any, that suggest what I think is a fuller truth: whether to impeach Trump is a moral, even a spiritual question.

That view is rooted in the idea that what we call “politics” is the spirituality of a whole community, a society. Sometimes it is a demonic spirituality, as in Hitler’s Germany. Sometimes it is a sacred spirituality, as in the three Constitutional Amendments after the Civil War that outlawed slavery, required “equal protection of the laws,” applied the Bill of Rights to state actions as well as the Federal government, and outlawed racial discrimination in voting rights.

These amendments, adopted in the 1860s, were not only a Second Constitution for the United States. They tried to end the original sin – notice the “spiritual” word – of slavery and racism in the original US Constitution and social system, and to bring about real racial equality. For almost a century, they mostly failed. Not till the grassroots upheaval of the Black-led freedom movement in the 1960s did the courts give some of those amendments reality.

The first sign of that “century of failure” was the Senate’s failure, by a single vote, to remove President Andrew Johnson in 1867 following his impeachment by the House of Representatives. The House had impeached Johnson for removing Edwin Stanton, as Secretary of War, despite a new law requiring consent of the Senate to remove a Cabinet official as well as to appoint a new one.

That may sound like a dusty technicality, but the real issue was whether the US Army, that had defeated the slave-holding, treasonous Confederacy, would use its full powers to insist on racial equality, Black voting rights, and Black economic empowerment in the South.

President Johnson had been nominated to become President Lincoln’s Vice-President in an attempt to reach out to pro-Union Northern Democrats in the 1864 election. Johnson became President after Lincoln’s assassination. He was no friend of racial equality. He had condemned the postwar Congress and its Constitutional amendments as illegitimate because the Southern states had not yet been re-admitted to the Union or the Congress.

Stanton, who had organized a lax and ineffective pre-war Army into a successful fighting force that broke the Confederacy, was ready to use the Army to prevent what soon happened in the South: the use of terrorism by the Klan and similar groups to prevent Blacks from voting, drive Black legislators out of office, and deny “40 acres and a mule” – economic power – to the newly freed Blacks.

The impeachment of Johnson was a moral and spiritual effort to advance human freedom and heal America from racism and racist terrorism. It failed. Had the Senate removed Johnson, much of American history would probably have been much different.

Today we are faced with a similar moral and spiritual issue in regard to the impeachment of Donald Trump. He and his administration have done their chaotic, incompetent “best” to subjugate numerous elements of American society:

Finally, there have been three steps in which Mr. Trump “crossed the Rubicon” in exactly the ancient and original meaning of that phrase: Julius Caesar in 49 BCE led his army across the Rubicon River in explicit defiance of a law to protect the Roman Republic from an out-of-control general. Caesar’s “crossing the Rubicon” led indeed to the collapse of the Republic.

It was Mr. Trump who crossed the Rubicon when he violated the clearest and – in preventing monarchy or dictatorship --  perhaps most important clause of the Constitution: Article I, Section 9: "No Money shall be drawn from the Treasury, but in Consequence of Appropriations made by Law."  Trump shattered the Constitution when he “drew money from the Treasury” to build his “wall” despite repeated refusals by Congress to appropriate money for it.

Though both houses of Congress (unlike the ancient Roman Senate) protested, Mr. Trump was able to veto this protest, and Congress did not move at once to impeach him.

And most recently, he asked a foreign power to intervene in the next presidential election to smear a rival to his own reelection. He endangered both US national security and American democracy, all to increase his own personal power. Even to many of his own close aides, that seemed a more dangerous act; in the view of the House of Representatives, that action crossed an even more dangerous Rubicon.

Each of these actions should be made the grounds for its own Article of Impeachment, all in support of the one basic “High Crime and Misdemeanor” that has been committed again and again by Mr. Trump. That High Crime has been his consistent use of arrogance and cruelty to try to subjugate and shatter all independent energies that affirm and embody American democracy.

And beyond even his attempts to throttle American democracy, Mr. Trump has taken actions even more threatening to the lives of millions of Americans, billions of other human beings, and a million other species:

Surely of all “high crimes and misdemeanors” for which we must impeach this President, the highest crime is choking and burning our Mother Earth. He has taken active steps to worsen the emissions of CO2 and methane from autos, coal plants, and fracking. To multiply oil wells and pipelines in our already troubled oceans and in our precious national parks. To weaken the protection of endangered species.

We should demand that the Bill of Impeachment name these crimes as well as the more conventional ones against the American body/spirit politic. For these crimes are part of the policy of cruelty and subjugation, and naming them is crucial to guiding the future actions of every leader of the United States and indeed of every nation, every corporation.

Mr. Trump’s consistent behavior reenacts the idolatrous politics of Pharaoh and of the Caesars who demanded they be not only politically obeyed but worshipped as gods. Mr. Trump has, indeed, even encouraged references to himself as the Messianic figure chosen by God to redeem the world. For them and for him, all-encompassing political power was identical with idolatry.

There have been some efforts – notably the plans of Speaker Pelosi – to restrict the Bill of Impeachment to the single charge of the attempted recruitment of Ukraine into the President’s reelection campaign. If impeachment is to be a moral and spiritual act, that charge must be one among the many instances of presidential cruelty and attempted subjugation. Including them will indelibly mark this impeachment as a moral and spiritual act.

One thought on “Impeach: Judicial, Political, Moral, or Spiritual?”