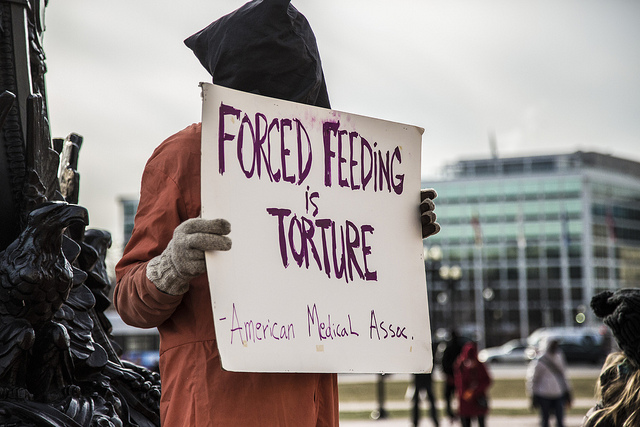 Image courtesy of Witness Against Torture/Flickr.

It’s no secret that conditions at ICE detention and processing facilities are deplorable. Long waits for bond hearings, lack of medical care, verbal abuse and worse from guards have all been documented.

Advocates say that as many as 30 asylum-seekers held in ICE detention are on hunger strike to protest these conditions and their unjust detention. In response, ICE officials in El Paso, Texas are force feeding nine of the men through nasal tubes and IV. The force feeding tube stays in their nasal passages 24/7. On some of the individuals the tubes are too large, causing nasal bleeding and unnecessary pain. Many of the detained asylum seekers have wounds and lesions on their throats and nasal passages, and are having difficulty speaking and breathing. We are deeply concerned about their health and well-being.

The United Nations Special Rapporteur on Torture has called the force feeding of detainees who go on hunger strike against their conditions as “tantamount to cruel, inhuman and degrading treatment.” The World Medical Association has forbidden its members from participating in such practices and the American Medical Association has condemned the practice.

Take action to stop this cruel practice at ICE!

Hunger strikes are one of the only means detainees have to protest cruel conditions of confinement and to demand justice. Ruby Kaur, a lawyer for two of the hunger strikers being force-fed told the NYTimes,

“You’re fleeing persecution, you come to this country, and you are being tortured here as well,” she said. “The only avenue they have is to peacefully protest.”

This article originally appeared on Defending Rights and Dissent.