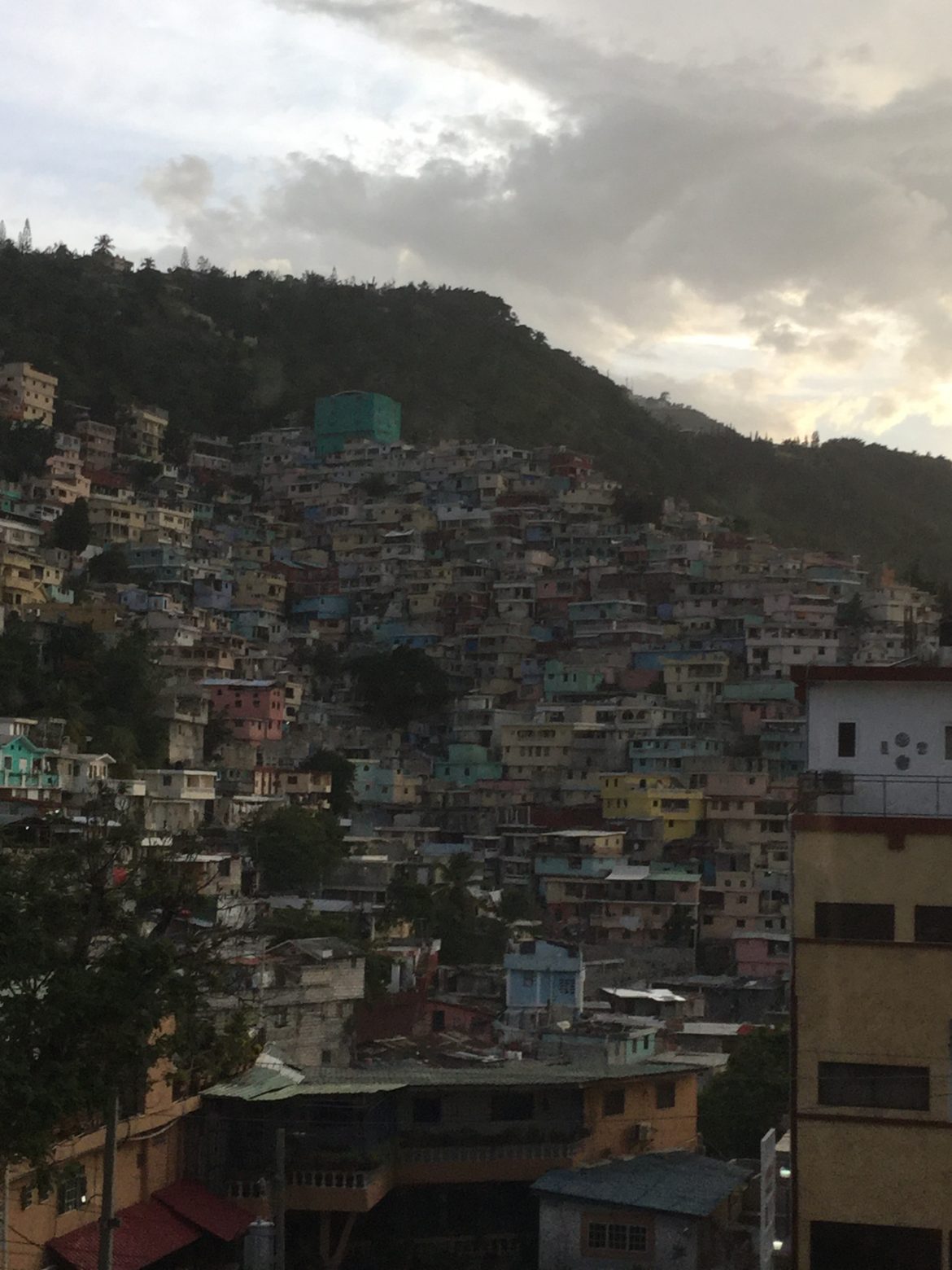 Image courtesy of the author.

The unfolding events in Haiti are a despairing call for social and economic justice in the absence of rule of law. The folks in the streets who kept Haiti on lockdown since February 7th  are clear about their demands. As Miami Herald’s Jacqueline Charles has reported, they want the 58th president, Jovenel Moïse,  to vacate his post because they have no confidence in his leadership. Since he took office in 2017, Moise, an outsider to the political machine but with the support of the United States and the CORE Group, has failed to deliver on promises to alleviate the suffering of the nation and his administration is accused of perpetuating the kleptocratic practices of predecessor Michel Martelly, founder of PHTK (Bald Head Party). Both were brought to power by elections contested by Haitian institutions, including an election observer commission, but ultimately validated by the international community.

What is seemingly uniting the protesters is staunch determination to completely uproot the corruption infesting public administration. They seek to put an end to the impunity that continues to protect those who are culpable, and eradicate a state system beholden to the oligarchy and an international community that habitually interferes in Haitian affairs. In that sense, the call to oust this president is a yearning for systemic change with the hopes of addressing an on-going structural crisis that dates back to the Haitian Revolution. This ultimatum, which has been brewing for some time began to erupt volcanically in July 2018. Its most recent spark was the Petro Caribe corruption scandal, involving the disappearance of nearly $4 billion from Venezuela intended for public works and social service projects, which prompted the where did the money go? campaign.

In Woy Magazine, a Kreyòl online venue, filmmaker Etant Dupain adds more context to the unrest.  He wrote, “July 5-7, a part of the Haitian population that is frustrated, tired and feel they are neglected took to the streets and caused a lot of damage. People died, people were hurt, property was lost in this spontaneous movement that gave a clear signal. If everyone got the message, it does not seem to have reached Jovenel Moise.” Last year, those who know Haiti intimately issued warnings. They insisted the country was especially ripe for a sociopolitical revolution as organizer, Ilio Durandis proclaimed unless government became proactive, more unrest would inevitably follow as the Institute for Justice and Democracy for Haiti Director Brian Concannon penned. To no surprise, protesters took to the streets again in November and this past historic week. February 7th 1986 marked the end of the Duvalier dictatorship.

As I have written elsewhere, anything you have read about Haiti thus far will remind you of an all too common and limited narrative; the first Black Republic is “the poorest nation in the Western Hemisphere.”  What almost none of them will mention is that Haiti also has one of the highest numbers of millionaires per capita in the region. Ninety percent of the country’s wealth is held by only 2% of its population. Rapper K-Lib Mapou lyrically meditates on this acute inequality in “PetwoPozisyon (Non).” With a sample of a crooning Edith Piaf, K-Lib remarks;  “Ten million people with less than two dollars and just a few hundred holding 3 billion… Doctors and nurses without a salary while their wives and mistresses are giving birth overseas.”

The Haitian business elite, once dubbed “morally repugnant,” remains an indifferent class that pays no taxes, and lives in luxury. Many participate in a patronage system that supports local gangs, which are predisposed to use their poorest compatriots especially during times of unrest in their on-going wrestling match for power amongst themselves. Along with the state machinery, the elite has historically engaged in what is called a “politique de  doublure”  the exchange and reinforcement of economic and political power for their own benefit at the expense of the masses. Historically, both  have had to contend with persistent foreign intervention (U.S. Occupation and MINUSTAH) and relations with international monetary institutions that undermine the republic’s sovereignty.

The disenfranchised majority population remains perpetually caught between this socio-economic extreme with its anti-blackness practices and this predatory state with disdain for restavèk or servant leadership. The state not only refuses a social contract with the nation—government provided-services remain non-existent throughout the country—but abdicated its responsibility to its people, relegating them to Christian and other NGOs.  Moreover, in the Haitian diaspora, we know and feel this. Our remittances, which according to a World Bank is one-third of the economy functions as the only social welfare net. This reality is obscured by a façade of calmness that is assumed whenever Haiti is not in the news.

Yet, daily life continues to be expensive. For example, the Haitian Gourde, which had been stable for nearly a decade has been on a downward spiral the last year, plunged earlier this month. Lavi che, the high cost of living, is another Kreyòl expression that explains the desperation of a vulnerable population that must cope with crisis after crisis as a result of both natural and manmade disasters in a global economy that favors the wealthy.

Whether it is hurricanes, earthquakes, botched development projects, excessive waste of resources for carnivals, and abuses by UN peacekeepers #Cholera and or missionaries with impunity, oppressed Haitians routinely express their dissatisfaction. Those in power simply don’t want to hear.

Since Haiti has always been at the avant-garde of debates concerning Atlantic freedom, what we are witnessing in the palatable anger and violence on the streets is perhaps the tipping point of dynamics that go back to the inception of the Republic centuries ago.  Simply put, Haiti is in the midst of an ongoing class war.  Unlike previous democratic crises (from the fall of the 28 year Duvalier dictatorship or coups against Jean-Bertrand Aristide), the current regime’s opposition—which remains a complex and fragile amalgamation of (im)possible alliances with many grasping for power. It includes an internet-savvy younger population as well as former middle class people who are fed-up with inheriting discontent and hopelessness. Frankly, they know it is structurally impossible for them to make a generative life under these subhuman conditions.

The current manifestations taking place are in part enactments of an oppressed majority’s outright refusal to be casualties of a vampiric system in which they are nothing more than cheap labor if that since unemployment is staggering. It is a system that has rendered the country invivab, unlivable as it continues to dehumanize the majority population and deny youths a future. Pèp la bouke is the saying in Kreyòl. People are tired.

Still, without dismissing historical particularities, this uprising must be understood as part of a global phenomenon of popular responses to an ever-increasing wealth gap that makes a mockery of the gilded-age. Poor people all over the world are revolting against big capital whether it is South Africa, Mexico, Pakistan, Turkey, Venezuela, France or the United States. In that regard, Haiti is no exception.

What we are seeing is the absolute failure of what late Haitian anthropologist Michel-Rolph Trouillot called “The longest neocolonial experiment in the history of the West.” This tumultuous class struggle is a remnant of the unfinished business of the only successful slave revolution in the world. The first Black republic remains at the crossroads.

President Moïse’s response after eight days of silence did little to quell the protesters. Travel advisories are on highest alert as the international community is fleeing. Local journalists are standing firm, denouncing the government’s turn to even more repressive tactics, outright killing protesters who are seeking a hopeful and sustainable life to realize the elusive revolutionary ideals of liberté, fraternité, egalité.

It is difficult to tell what is next for my beloved homeland. It is clear that no concrete change will come unless the path ahead confronts the persistent unequal distribution that characterizes Haitian life. Nou rete nap gade. We wait and we watch.

Gina Athena Ulysse is a feminist artist-anthropologist. She is the author of Why Haiti Needs New Narratives (2015), and Because When God Is Too Busy: Haiti, me & THE WORLD (2017). She is a Professor of Anthropology at Wesleyan University in CT.

One thought on “Haiti’s Unfinished Revolution Is Still In Effect”