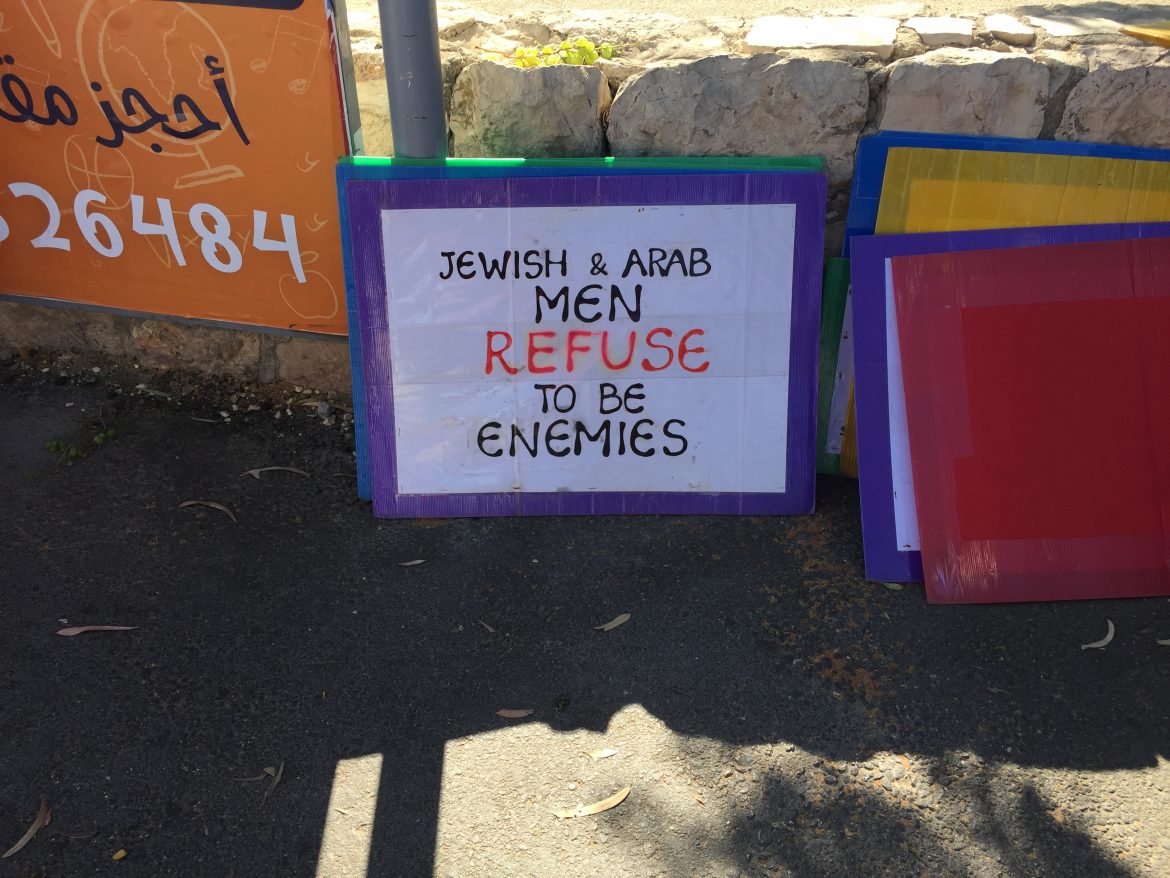 In the wake Netanyahu’s recent re-election in Israel, there is mounting despair among the political left about the prospects for resolving the Israel-Palestine conflict according to the two-state solution. Constituting a global political and legal consensus, this approach to resolving the conflict is premised on the principles of international law and human rights: a return to the pre-June 1967 borders with minor and mutual modifications, such as assigning to Palestine the whole of the West Bank, Gaza, and East Jerusalem; a just settlement of the refugee question; and a joint recognition that Israel and Palestine have the right to live in peace and security with their neighbors. Despite the international consensus, Prime Minister Benjamin Netanyahu publicly refuses to implement the two-state solution, claiming that the creation of a self-determined Palestinian state would undermine the security of Israel. He asserts, “I think that anyone who is going to establish a Palestinian state today and evacuate lands is giving attack grounds to the radical Islam against the state of Israel.”  This entrenchment of the Occupation behind alleged security concerns gives the appearance that a diplomatic settlement in accord with the international consensus for resolving the Israel-Palestine conflict is no longer a real possibility.  However, the chief obstacle to peaceful co-existence and self-determination of the Israeli and Palestinian people is the position of the United States, which provides key political and military support for Israel and its occupation of Palestine.

While familiar, the disingenuousness of the security pretext for continuing the Occupation is clearly revealed by the continued construction of Israeli settlements. By means of steady annexation of the valued pieces of occupied Palestinian territory, Israel is attempting to use its military power to unilaterally determine the terms of its final-stage negotiations with Palestinians. As Moshe Dayan, the former Israeli Minister of Defense, put it in the early 1970s, “The settlements are forever, and the future borders will include these settlements as a part of Israel.” Consider the response of Nir Baram, a well-known Israeli novelist and political writer, in his opinion piece published in Haaretz in March. Baram points out that despite years of negotiations and legal proceedings, “the only consistent, unrelenting process has been the expansion of the settlements.” In his view, it is “time to give up on two states” because the international community and the political left within Israel both “lack the clout to force its acceptance by Israel.” While repeated peace initiatives fail, Israel is transforming the demographic and economic conditions within the occupied territories in order to preclude any feasible implementation of the two-state solution. Baram asks, "For how many more years will we go on talking about a two-state solution? In 2060, when there will be about a million Jews living in the West Bank, will we still be demarcating abstract borders?" His question echoes the sentiment of many others today who now mistakenly believe that the two-state solution is dead.

Baram turns to increasingly popular alternatives to the two-state solution: “It is our obligation to contemplate new solutions and, above all, to question the feasibility of separation models … Groups of [Palestinians] are working for the creation of one state or for a new two-state model that isn’t based on separation.” As a model, the one-state solution looks to the anti-apartheid struggles in South Africa, supposing that the conquest of Palestine by Israel creates an opportunity for a civil-rights struggle by the Palestinians internal to a unified Israel. However, as a means to achieving self-determination and security for the Palestinian people, the one-state solution makes little sense.

A central goal of the apartheid regime in South Africa was the economic exploitation of its oppressed people of color by a minority of white rulers; the objective of the Israeli occupation is the territorial expansion a majority Jewish state. This requires the transfer and expulsion of the indigenous Palestinians, not their subjugation within a unified Israel with a non-Jewish majority. Recounting the creation of Israel, historian Benny Morris writes in his book Righteous Victims, “Zionism had always looked to the day when a Jewish majority would enable the movement to gain control over the country. The Zionist leadership had never posited Jewish statehood with a minority of Jews ruling over a majority of Arabs, apartheid-style.” Elsewhere, he explains that population “transfer was inevitable and inbuilt into Zionism—because it sought to transform a land which was ‘Arab’ into a ‘Jewish’ state and a Jewish state could not have arisen without a major displacement of Arab population.” The one-state solution is premised on Israeli planners making a strategic mistake; inadvertently creating a demographic problem that undermines their designs of expanding the Jewish state into the occupied territories. This is highly unlikely. It is at best unclear why Netanyahu and his supporters would be amenable to replacing a Jewish state with a binational one when they will remit neither the Occupation nor the settlements.

The degenerating humanitarian condition of the Palestinians makes urgent a renewal of efforts to resolve the Israel-Palestine conflict in accord with the international consensus on a two-state solution. According to B’tselem, the Israeli Information Center for Human Rights in the Occupied Territories, almost all of the water in the Gaza Strip is unsuitable for human consumption due to the lack of proper wastewater treatment and electricity shortages. B’tselem points out that the long-standing water difficulty in Gaza has been seriously exasperated because “Israel damaged wastewater-treatment facilities during Operation Cast Lead, resulting in far greater quantities of sewage going untreated.” They urge Israel, “without delay,” to “allow materials and equipment to be brought into Gaza for the purpose of restoring and developing Gaza’s water and wastewater treatment systems.” It is worth quoting at length the assessment of Amnesty International, the world’s leading human rights organization, of the state of Israel and the Occupied Territories in 2014:

Israeli forces committed war crimes and human rights violations during a 50-day military offensive in the Gaza Strip that killed over 1500 civilians, including 539 children, wounded thousands more civilians, and caused massive civilian displacement and destruction of property and vital services. Israel maintained its air, sea and land blockade of Gaza, imposing collective punishment on its approximately 1.8 million inhabitants and stoking the humanitarian crisis. In the West Bank, Israeli forces carried out unlawful killings of Palestinian protesters, including children, and maintained an array of oppressive restrictions ... Israeli forces detained thousands of Palestinians, some of whom report being tortured, and held around 500 administrative detainees with near total impunity.

In the New York Review of Books blog, David Shulman discusses Breaking the Silence, a group of former Israeli soldiers who scrutinize the operations of the Israel Defense Force. Shulman explains the general thrust of their report on Operation Protective Edge:

Soldiers briefed by officers before they went into Gaza were instructed to avoid all risks to themselves even at the cost of certain, possibly substantial, civilian causalities ... The same approach—massive fire, sometimes uncontrolled or indiscriminate—held true at much higher levels of operation, as in the destruction of buildings, indeed of entire neighborhoods ... either by ground artillery or from the air.

These actions and protocols are deeply inconsistent with fundamental tenants of international humanitarian law, which affords immunity to civilians and other non-combatants. The fourth Geneva Convention states in Article 3: “Persons taking no active part in the hostilities … shall in all circumstances be treated humanely.” It is strictly forbidden, “at any time and in any place” to subject non-combatants with “violence to life and person.”

The diplomatic record clearly shows that the United States is the key backer of Israel’s occupation of Palestine. Each year, the UN General Assembly votes on a resolution titled “Peaceful Settlement of the Question of Palestine.” The resolution affirms the legal principle that it is inadmissible to acquire territory by war, from which it follows that all Israeli settlements within occupied Palestinian territory are illegal. This principle has been formally upheld by the World Court, which ruled that all Israeli settlements in the occupied territories are violations of the 1949 Geneva Conventions forbidding the transfer of population from occupying powers to occupied territories. Every year, the only negative votes cast against the “Peaceful Settlement” resolution come from the United States, Israel, and a number of Micronesian countries. All of the member states of the Arab League endorse the two-state settlement.

The Demand for an Arms Embargo

Whatever policies are adopted with respect to the occupied territories by the Israeli government, the chief obstacle to resolving the conflict is the United States and its veto power at the UN Security Council. This presents a great opportunity for communities of faith in the United States: if the United States were to no longer provide Israel with critical diplomatic, political, military, and ideological support for the occupation of Palestine, then the international community would be unimpeded in the enforcement of the law upon Israel. This would bring the Occupation to a swift end, regardless of whatever ambitions Netanyahu and his supporters may harbor for the occupied territories.

During Operation Protective Edge, Amnesty International called for the United Nations to "immediately impose a comprehensive arms embargo on Israel, Hamas, and Palestinian armed groups with the aim of preventing serious further violations of international humanitarian law and human rights." They urged, "pending such an embargo, all states must immediately suspend all transfers of military equipment, assistance and munitions to the parties." This includes any transfer of military equipment, assistance, and munitions from the United States to Israel. Even under domestic U.S. law, it is illegal to transfer arms to consistent violators of human rights, meaning that a critical blow to the Occupation would be delivered if only the United States would adhere to its own laws.

The viability of a two-state solution to the Israel-Palestine conflict, one that accords with the requirements of international law and principles of human rights, does not turn on the results of the recent elections in Israel. Instead, it depends critically upon the conscience of people within the United States. One possibility is that American Jews and Christians will continue to provide ideological support for the illegal annexation of valuable territories, the continuing breakup of Palestine into unviable fragments, and the ruthless exercise of military violence upon an already impoverished and desperate people. They may continue to pretend that the mandates of God or the historical sufferings of the Jewish people justify the poisonous water in Gaza. Another possibility is that American Jews and Christians will assert that bulldozers, blockades, and white phosphorous are not, and can never be, efficacious instruments of a just peace or a fair society. The mechanisms of international law can and will bring a reasonable end to the Israel-Palestine conflict if the United States would permit these laws to function.

Timothy R. Prisk holds a doctorate in physics and he has been involved in various activist organizations. He previously wrote about Occupy Wall Street as a guest of Tikkun Daily.