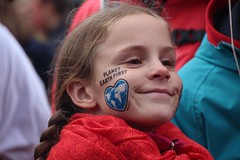 The greatest threat to this planet and all of us, and all life on the planet, is the environmental crisis. For the vast majority of people in the United States, most of the time, life goes on as usual everyday as if there is no existential threat to our lives. And yet, every once in a while, youth and others rise up to remind us, awaken us, disrupt us so that we are forced to face the reality of what lies ahead.

This weekend at the Harvard/Yale football game, hundreds of students and alumni of both institutions rose up and did just that. During the halftime show, they stormed the field and disrupted the show and held the field, delaying the game for about an hour, holding signs condemning Harvard and Yale for being “complicit in climate injustice” and demanding divestment from fossil fuels. For sure it makes people uncomfortable. Fans get irritated and impatient. ESPN undoubtedly was not thrilled, as the game was aired live. And yet, they held their ground, some refusing to leave and being arrested.

As Rep Alexandria Ocasio-Cortez articulated so powerfully, “Activism disrupts the present to change the future.” Disruptive actions such as these are part of the process of bringing forth the change for a liveable and sustainable future for us all. The fact that alumni of two of the most elite universities, with investments in fossil fuels totally $68 billion, took such a stance, hopefully instills courage in all of us so can and will join them in small and big actions. If Harvard and Yale take the lead, undoubtedly other institutions will follow suit. (You can read about the action here.)

In addition to disruptive actions, we also need visionary proposals and long-term strategies. Tikkun and the Network of Spiritual Progressives have been leading the way in such efforts for over 30 years. You can read here about our Environmental and Social Responsibility Amendment to the U.S. Constitution which addresses political corruption, environmental destruction, and social justice through a comprehensive amendment. To learn more about our strategy, we encourage you to read Rabbi Michael Lerner’s new book, Revolutionary Love: A Political Manifesto to Heal and Transform the World, you can read more and order it here.