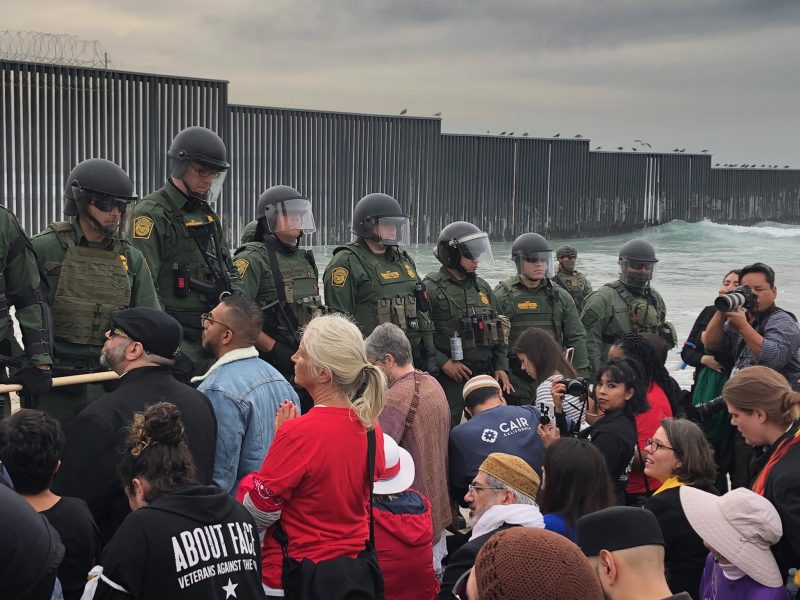 Cat Zavis reports on a recent interfaith action at the U.S.-Mexico border to demand respect for the human right to migrate and seek asylum, an end to the militarization of border communities, and an end to immigrant detention and deportation and the defunding of ICE and Border Patrol.

In an attempt to prevent violence, we have created institutions, namely, morality and religion––but, paradoxically enough, the most deadly violence has always been done in the name of these institutions. In this article, James Gilligan and James Vrettos ask why this is and what we can do about it.

Stephen Zunes urges readers to tell the Democratic Party leadership to not give Engel the chairmanship of the Foreign Affairs Committee.

Can You See Me?

CJ Rosenblatt writes about her interactions with a homeless Seattle woman: “While I was trying to save her, it was Liz who saved me from my growing cynicism and fear.”

The Dream Defenders and False Accusations of Anti-Semitism

Donna Nevel explains that when claims of anti-semitism are falsely hurled against politicians and activists, they both have destructive consequences and also make a mockery of, and trivialize, real acts of anti-Semitism.

Judy Kronenfeld examines the loss that stays with us through generations in her poignant poem, “This Country.”

Activism is the Rent I Pay For Living on This Planet

Dana L. Sinopoli argues that it is time we pay our rent for living on this planet by engaging in activism.

Dr. Gary G. Kohls does a deep dive on the corrupted theology which led to the Pittsburgh Synagogue shootings.

Jim Sleeper asks: Did Democrats Do Enough to Stop Kavanaugh?

After Kavanaugh’s nomination, Jim Sleeper postulates that the Democrats did quite as much to widen the civic and political vacuum into which Trump has swept as did the follies of conservatives.

A Year After Harvey in Houston

In the wake of Hurricane Harvey, Avital Ingber and Sacha Bodner share the incredible outpouring of tikkun olam in Houston.

What Will Donald Trump Be Remembered For?

Tom Engelhardt argues that Donald Trump will be remembered as the President who committed one of the greatest crimes in history: the destruction of our environment.

The Obligation to Speak Up in the Age of Trump

David Lehrer, who headed the West Coast ADL for 27 years, and now runs Community Advocates, Inc., a non-profit since then, sent Rabbi Moshe Levin this piece he published.  Rabbi Levin adds: “I can not imagine a better expression/response to the Jewish establishment who say, Sha, Shtil, don’t be political – we just want religion from the pulpit. ”  Rabbi Lerner adds: For those who use the High Holidays to address everything except the destruction of the life support system of planet earth, the immoral treatment of refugees, the vast economic and political inequalities in this society, the reactionary nationalism that Trump’s election has promoted both here and around the world, and who instead focus on narrowly theological questions or urge a spirituality that is focused on being present to the present moment in their lives, but never includes in that present moment what is happening to the tens of millions of people who are being badly hurt by what the U.S. is dong and what Israel is doing at the present moment [implicitly denying that we are all ONE and part of the unity of all being and that the pain of others around the world and in our society ricochets into all of our lives creating depression and despair in ways of which we need to become conscious), I say: please read and re-read the Haftorah for Yom Kippur in which Isaiah, 3500 years ago, standing outside the ancient Temple in Jerusalem to those going to worship God while ignoring the evils and suffering around them. (Isaiah 57, sentences 14 to ch. 58: 14). The Obligation to Speak Up in the Age of Trump
By David A. Lehrer
dlehrer@cai-la.org
Community Advocates, Inc., 865 South Figueroa St., 3339, Los Angeles, CA 90017August 2018
Editor’s note:
Many in the Jewish world has been fascinated by the internecine discussion on the role of our leaders, from Federations to rabbis, regarding speaking up about Donald Trump.

AntiSemitism & Corbyn’s run for Prime Minister of the UK

[Editor’s note: this article appeared in Mondoweiss, an important cite presenting frequently accurate critiques of Israeli policies. It is written by an author who has never been willing to write for Tikkun, perhaps because we address not only the suffering of the Palestinian people but also the ongoing PTSD of the Jewish people as well. Nevertheless, his criticisms of those who critique leftist critiques of Israeli policy are often on target. In presenting his views, we do so not to endorse them but to alert our readers to this debate about Corbyn’s antiSemitism. While I do NOT accept many of the arguments put forward in this article, I do agree with its major thesis–Corbyn, the head of the British Labor Party, is not an anti-Semite, and it is a disservice to the Jewish people to raise that claim against progressives whose primary sins are that a. they have strong criticisms of Israeli policy toward Palestinians, and b. that they refuse to allow the pro-Israel lobbies around the world to define what is or is not acceptable criticism of Israel.

A Death in the Family:

A great force for a peaceful world left the planet when David McReynolds, who for decades was the best-known voice of American radical pacifism, died August 17 of injuries from a fall in his East Village home. He was 88 and had spent almost 40 years on the staff of the War Resisters League as a self-described “movement bureaucrat.” He ran twice for the presidency and once for Congress, traveled the world promoting nonviolent resistance, wrote one book and innumerable articles and pamphlets, came out as gay long before most people in public life did, and documented the movements of his time in indelible photographs. He was one of the last (and youngest) of a heroic generation of pacifists who resisted war and militarism between World War II and the Vietnam War and went on to help forge a vibrant peace movement in the aftermath of the wars.

Born in 1929 into a comfortable Baptist family in Los Angeles, McReynolds early on evinced his commitment to pacifism and Marxism, saying much later that he “didn’t see how one could be one without being the other.”  Equally apparent by his adolescence, if not before, were the outsize contradictions that would characterize his adult life. A tall, gangling teenager, aware of his homosexuality from the age of ten and, as he later wrote, “haunted” by it, in high school he joined the World Fellowship Club to oppose U.S. Cold War policies.