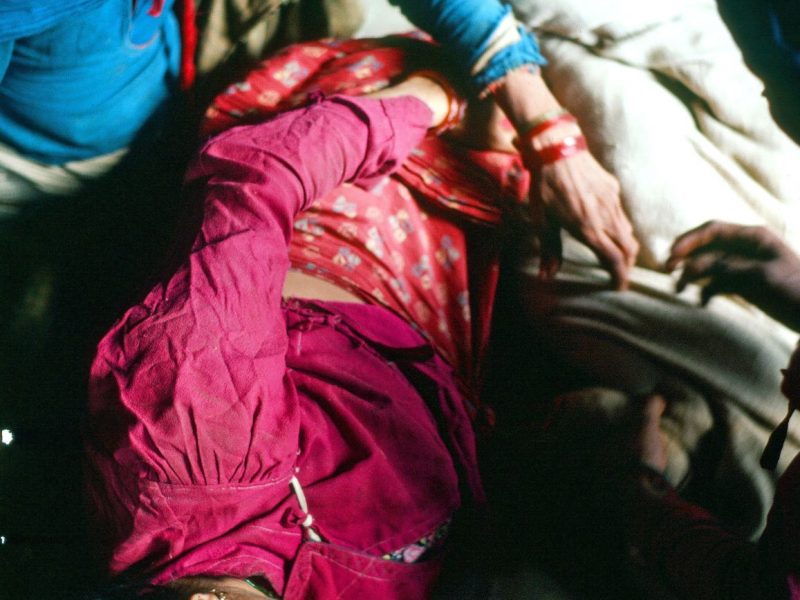 MaryAnne Mercer shares a riveting story about the tragic results when mothers-to-be do not have access to quality healthcare and reminds us of the importance to fight for universal care for all.

Learning to Be Sick

This article was first published by the New York Times, under the title “In My Chronic Illness,  I found Meaning” on Jan 10, 2018. It did not include the prayer on able-ism. Learning to Be Sick

I became disabled overnight in a car accident. The car accident was a dream, but the disability was real.

I dreamed I was driving through the ravaged streets of Oakland at the end of the world.

America's powerful corporations made a killing with the passage of the Republican tax cuts. The tax cuts will hand trillions of dollars to the companies and their moneyed owners following a massive corporate lobbying campaign. Yet the US government announced this month an even graver corporate killing. According to the Centers for Disease Control and Prevention (CDC), US life expectancy fell again last year for the second straight year, declining 0.1 year between 2015 and 2016. And make no mistake -- America's health crisis is the result of greedy corporations and their reckless practices.

I found the following on the internet, do not know who authored it, but do believe that it is accurate in reporting who voted against lowering costs for prescription medications by allowing them to be brought in from Canada which offers the very same drugs we get, but at  a substantially lower cost. That's one advantage Canadians get by  having their government rather than the market shape their health care system. It could have been ours had President Obama, in his first two years with a Democratic Congress, fought for "Medicare for All," simply taking the existing system that works well for the elderly, and extending it to everyone else, plus insisting on getting lower costs for medications by allowing us to import the lower priced medications from Canada. But this is only one of a dozen areas in which he capitulated to the capitalist elites without even engaging in a public struggle for a single day. PAY ATTENTION: this is not a matter only of different philosophical beliefs about free markets--because many people in the U.S. are too poor to afford the medications that they need while big Pharma gets away with murder (literally) in putting profits before people.

The Alzheimer’s Party by Trish Vradenburg

A third party the Dems and GOP can get behind: Alzheimer's Party

UsAgainstAlzheimer’s, a nonprofit devoted to stopping the progression of Alzheimer’s by 2020, is calling to unify around the "Alzheimer's Party." (NJ Advance Media wire services)

My role in life has been to cancel my husband's vote. George grew up in Colorado – God's country as he calls it – where being a Republican is served with mother's milk.  I, on the other hand, was raised in New Jersey, the Garden State, populated with people who, after hearing both sides of every argument, chose to be Democrats. And then we met each other and, well, somehow in the heat of passion I forgot to ask about party affiliation. Not that it would have been a deal breaker since I assumed that once we married I could break George's silly habit of voting with the elephants.

Being Mortal: Medicine and What Matters in the End
by Atul Gawande
Metropolitan Books, 2014

What does the Torah have to say about end-of-life care? Its most striking story on this topic appears in the last four chapters of Genesis, which describe the hospice death of the Jewish patriarch Jacob. After Jacob became ill, he summoned his children and grandchildren, and requested burial in the Caves of Machpeleh, alongside his parents (Isaac and Rebecca) and his grandparents (Abraham and Sarah). He gave blessings to his sons, and “when Jacob finished instructing his sons, he drew his feet onto the bed; he expired and was gathered to his people” (Gen. 49:33). He suffered no invasive medical interventions, he was surrounded by his family and was able to bless them, and he died a peaceful death.

We, the young, pretty ones, could easily find or fake the generosity to jolly those luckless oldsters along. We could cheerfully shake their hands (only a little appalled by their soft grips, papery skin, delicate bones, faintly mildewed smell). We could chat with them, ask how they were getting on., and we found ways to look interested in their answers. We listened, even if the answers bored us. Silently, however, we relegated the oldsters' thinking and experience to the Irrelevant pile.

A book on Caring for People With Alzheimer’s

Jade Angelica introduces us to her approach to caregiving for people with Alzheimer’s  by reminding us that it is about “the power and potential of true encounter”. That “true encounter”, inspired in many ways by Buber, Heschel and a host of others, is a motif that is unpacked in her readable and informative narrative about her personal journey with her mother.  “Where Two Worlds Touch” joins a growing list books and articles that have begun to address the growing challenges to families and society that are emerging with the aging of the baby boomers.

The Making of Beauty Is a Verb and the Spiritual Body

Considering our society from a disability perspective forces the question of why we seem so bent on forging a society in which so many are marginalized, stigmatized, or deemed somehow unworthy.

High Holy Days in the Hospital

“On Rosh Hashanah it is written, and on Yom Kippur it is sealed. Who shall live and who shall die, who shall perish by fire and who by water, who by Roman soldier and who by cancer…”

“No, that’s not how it goes,” I wearily chided myself from my hospital bed. I knew I was making up my own words. But alone in the wee hours of the morning, as the High Holidays approached, that was the best rendition of the Unetanah Tokef (the central prayer of the High Holiday service) that I could muster. And my brother Jeffrey later told me that spending the eve of Yom Kippur with me in the hospital was the most meaningful Yom Kippur of his life.

Work Your Quirk: The Power of the Disability Art Community

When I first joined Interact Theater Company, I had recently been in a motorcycle accident and lost the use of my right arm. The question was posed, “If there was a pill to take away your disability, would you take it?” I was surprised to find that I was the only one in the circle who said yes. I looked at my fellow performers and wondered if I would ever be able to accept my new self.

I am lying comfortably on the table in my acupuncturist’s office. Mellow music plays in the background while my acupuncturist soothingly talks me through my treatment. As we chat casually about the different approaches between Eastern and Western medicine, she suddenly stabs me with a metaphorical needle, puncturing our trust: in the same calm tone she has been using all morning, she tells me that, within Chinese religions, physical illness and disability are often understood as “a result of mistakes made in a previous life—a disability is an indication of a lesson that one’s spirit needs to learn.” Inaccurately conflating the rich diversity of Chinese philosophical and religious systems of thought under the single blanket of “Chinese religions,” my white acupuncturist has simultaneously disseminated incorrect information and made me feel inferior and unmeritorious. Her suggestion that I am to blame for my disability jolts me back to a similar experience from the previous year, when I was traveling with my guide dog, Papaya, and needing to catch a connecting flight. An airline employee assisted me with the transfer while discussing the unending bounties of Jesus’s love.

“I live life in slow motion. The world I live in is one where my thoughts are as quick as anyone’s, my movements are weak and erratic, and my talk is slower than a snail in quicksand,” writes Australian author and activist Anne McDonald, reflecting on her perception of time. “I have cerebral palsy, I can’t walk or talk, I use an alphabet board, and I communicate at the rate of 450 words an hour compared to your 150 words in a minute—twenty times as slow. A slow world would be my heaven. I am forced to live in your world, a fast hard one.

Who Can Be Commanded?: Disability in Jewish Thought and Culture

Recently two dear friends asked me to advise them about their pregnant daughter, who just discovered that her fetus has Noonan syndrome, a genetic condition that can result in heart defects, unusual facial features, short stature, and learning problems. The pregnant daughter wanted to keep the child, but her husband was afraid that the child would have a difficult life and was concerned about possible consequences for the rest of the family. My friends presented the possibility of abortion in this case as a Jewish legal question. May a person, they asked, decide over life and death? What is our responsibility to act on this, and where are the limits? My reply:
Though such children have a difficult path to follow, yet it is a life with many possibilities for fulfilment.

No Casseroles for Schizophrenics: The Church and Mental Illness

One important lesson we must all learn, Christian or otherwise, is that the patient is not the illness. Symptoms of the illness are not the patient’s fault nor are they signs of a sick soul.