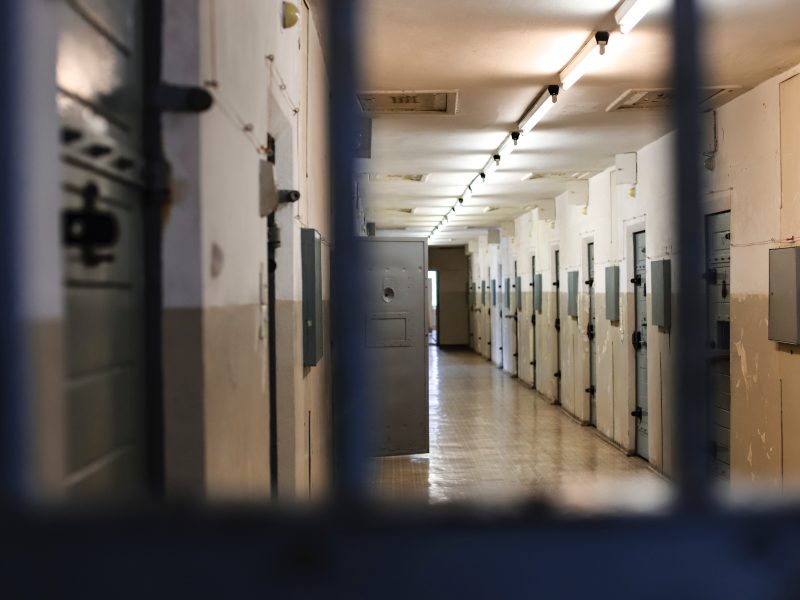 Senator Elizabeth Warren has “[a] plan to root out once and for all the profit incentives perverting our criminal and immigration systems.”

The Scourge of Solitary Confinement

Stories of solitary confinement show the need for systemic change.

There Oughta Be a Law… Should Prison Really Be the American Way? By Rebecca Gordon

Editor’s note: Here is another piece from our ally TomDispatch.com by Rebecca Gordon  with an introduction by Tom Engelhardt. To understand America, you have to understand the “friendly fascism” that already exists for a section of the population that regularly rotates through our criminal justice system. –Rabbi Michael Lerner

The figures boggle the mind.  Approximately 11 million Americans cycle through our jails and prisons each year (including a vast “pre-trial population” of those arrested and not convicted and those who simply can’t make bail).  At any moment, according to the Prison Policy Initiative, there are more than 2.3 million people in our “1,719 state prisons, 102 federal prisons, 942 juvenile correctional facilities, 3,283 local jails, and 79 Indian Country jails as well as in military prisons, immigration detention facilities, civil commitment centers, and prisons in the U.S. territories.”  In some parts of the country, there are more people in jail than at college. If you want a partial explanation for this, keep in mind that there are cities in this country that register more arrests for minor infractions each year than inhabitants. Take Ferguson, Missouri, now mainly known as the home of Michael Brown, the unarmed black teenager shot and killed in 2014 by a town policeman.

American War Crimes That Still Ought to be Prosecuted

American War Crimes That Still Ought to Be Prosecuted
Let’s take a moment to think about the ultimate strangeness of our American world.  In recent months, Donald Trump and Ted Cruz have offered a range of hair-raising suggestions: as president, one or the other of them might order the U.S. military and the CIA to commit acts that would include the waterboarding of terror suspects (or “a hell of a lot worse”), thekilling of the relatives of terrorists, and the carpet bombing of parts of Syria.  All of these would, legally speaking, be war crimes.  This has caused shock among many Americans in quite established quarters who have decried the possibility of such a president, suggesting that the two of them are calling for outright illegal acts, actual “war crimes,” and that the U.S. military and others would be justified in rejecting such orders.  In this context, for instance, CIA Director John Brennan recently made it clear that no Agency operative under his command would ever waterboard a suspect in response to orders of such a nature from a future president.  (“I will not agree to carry out some of these tactics and techniques I’ve heard bandied about because this institution needs to endure.”)

These acts, in other words, are considered beyond the pale when Donald Trump suggests them, but here’s the strangeness of it all: what The Donald is only mouthing off about, a perfectly real American president (and vice president and secretary of defense, and so on) actually did.  Among other things, under the euphemistic term “enhanced interrogation techniques,” they ordered the CIA to use classic torture practices including waterboarding (which, in blunter times, had been known as “the water torture”).  They also let the U.S. military loose to torture and abuse prisoners in their custody.  They green-lighted the CIA tokidnap terror suspects (who sometimes turned out to be perfectly innocent people) off the streets of cities around the world, as well as from the backlands of the planet, and transported them to the prisons of some of the worst torture regimes or to secret detention centers (“black sites”) the CIA was allowed to set up in compliant countries.  In other words, a perfectly real administration ordered and oversaw perfectly real crimes.  (Its top officials even reportedly had torture techniques demonstrated to them in the White House.)

At the time, the CIA fulfilled its orders to a T and without complaint. A lone CIA officer spoke out publicly in opposition to such a program and was jailed for disclosing classified information to a journalist.  (He would be the only CIA official to go to jail for the Agency’s acts of torture.)  At places like Abu Ghraib, the military similarly carried out its orders without significant complaint or resistance.  The mainstream media generally adopted the euphemism “enhanced interrogation techniques” or “harsh techniques” in its reporting — no “torture” or “war crimes” for them then.  And back in the post-2001 years, John Brennan, then deputy executive director of the CIA, didn’t offer a peep of protest about what he surely knew was going on in his own agency. In 2014, in fact, as its director he actually defendedsuch torture practices for producing “intelligence that helped thwart attack plans, capture terrorists, and save lives.”  In addition, none of those who ordered or oversaw torture and other criminal behavior (a number of whom would sell their memoirs for millions of dollars) suffered in the slightest for the acts that were performed on their watch and at their behest. To sum up: when Donald Trump says such things it’s a future nightmare to be called by its rightful name and denounced, as well as rejected and resisted by military and intelligence officials.  When an American president and his top officials actually did such things, however, it was another story entirely. Today, TomDispatch regular Rebecca Gordon catches the nightmarish quality of those years, now largely buried, in the grim case of a single mistreated human being.

S.F. Police Murders (Murderous Police in the City of Love)

Murderous Police in the City of Love
Posted by Rebecca Gordon

In one of the widely circulated cellphone videos of the killing of Mario Woods by San Francisco police in December, you can hear the young girl filming his death screaming. “Are you fucking serious?” she shrieks over and over at the crowd of cops encircling the young black man. According to police, Woods had refused to drop a kitchen knife they claim he was carrying. He was nonetheless attempting to walk away from the officers.

From the Ruins of Europe: Lyacos’s Debt-Riddled Greece

If the postmodernists celebrated a departure from objective truths, Lyacos offers a vision of subjective return. Though his view is more pragmatic than ideal, Lyacos argues for a new interpretation of God, the Bible, and their roles in contemporary society.

What Can Replace Prison?

Burning Down the House: The End of Juvenile Prison
by Nell Bernstein
The New Press, 2014

Locked Down, Locked Out: Why Prison Doesn’t Work and How We Can Do Better
by Maya Schenwar
Berrett-Koehler, 2014

If you have the capacity to read one book on prisons this month, which should you choose? For many people I would say without hesitation: Michelle Alexander’s The New Jim Crow: Mass Incarceration in the Age of Colorblindness (The New Press, 2012). It is a stunning book. Or it was for me. Call me naïve, but it had never occurred to me that the cancerous growth of the prison system since the 1970s might have been a response to the success of the Civil Rights movement in the ’60s.

Spiritual Evolution and the Law

One way to view the inexorable march of biological evolution is as the development of the neurological capacity necessary to recognize this universal inner presence more and more fully. And not just in humans.

All over the country, people in communities of faith are on the front lines of a renewed and growing movement pushing for basic aid and a path to legalization for some 11 million migrants living in the United States without legal status.

The Rabbi Who Visited Death Row

Rabbi Chaim Richter and I met on death row during my second year of isolation in a maximum-security women’s prison in the Florida Everglades. I was the only woman on death row at the time. Having been wrongfully convicted in the murder of two police officers, I remained under sentence of death for five years until 1981, when the Supreme Court of Florida changed my sentence from death to life imprisonment. After twelve more years of imprisonment, I won my federal habeas corpus and the federal district court overturned my case. Rabbi Richter visited, counseled, and befriended me throughout those long years.

During economic booms, migrants are recruited as much-needed workers. During downturns, they are demonized and deported. It’s a tumultuous affair wrought with hypocrisy, injustice, and cruelty.

The New Abolitionism: The Struggle to End Deportation

The travails of deportation will cease only with its abolition. From Dayton, Ohio, to Washington, D.C., activists are joining forces with targeted communities in the burgeoning movement to end this unjust system.

To build a world free of borders and border violence—a world where no one yells, “go back to where you came from”—we need to address the fear motivating those who would shut the door.

Awakening to the Story in My Bones: Border Crossings, Detention, and Asylum

It is amazingly easy to become quietly complicit with the violence of U.S. border policy—even for those whose ancestors once fled violence themselves. How can so many of us live in denial?

Living in the Shadow of SB 1070: Organizing for Migrant Rights in Arizona

The predatory escalation of immigration enforcement in Arizona has continued to worsen in the wake of Arizona’s 2010 immigration law. In response, migrants have organized Barrio Defense Committees, Freedom Rides of undocumented activists, and more.