With the people from the bridge
Dimitris Lyacos
Translated from the Greek by Shorsha Sullivan
Shoestring Press, 2014 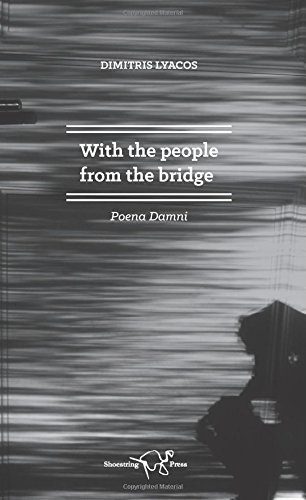 In 1925, amidst the ruins of WWI, Virginia Woolf wrote: “in the vast catastrophe of the European war our emotions had to be broken up for us…before we could allow ourselves to feel them in fiction or poetry.” The result, as Woolf’s own writings attest, was a renewed emphasis on fractured narratives, where emotions were scattered and difficult to pinpoint. The result was European High Modernism, an ethos that avant-garde poetry arguably never shed.

More recently, Greece has experienced its share of upheavals, beginning with the brutal military junta of 1967-74, a brief spell of democracy, and finally, the economic crisis of 2009, the effects of which continue to linger, dominating headlines daily. Perhaps it is no wonder, then, that Dimitris Lyacos, a contemporary Greek poet, offers the reader a series of hell-like fragments in With the people from the bridge. The second installment in Lyacos’s Poena Damni trilogy, the poem mimics Woolf’s thesis of broken emotions, although it also verges towards the postmodern.

The poem is set underneath a train bridge, where an unnamed narrator watches the performance of a play. The central conflict of this play revolves around a Poe-like love affair, and the piece is directed by a character only known as “The Narrator.” About the only thing that is certain in the production is that an imprisoned man loves a woman unrequitedly. This isn't your typical one-sided romance, however.

The poem is translated by Shorsha Sullivan, who, in his essay, “The Art of Translating,” explains the difficulties inherent in condensing a whole culture's language, and thus its history, into contemporary English. The translation eventually becomes its own piece of literature, he argues, creating “two different places and times.” Certainly, his point has been argued elsewhere, but it’s worth a read, if only to uncover the nuances in his writing and the liberties he has taken in translating Lyacos.

The landscapes and plot, combined with its variation of minimalist verse and prose passages, make With the people from the bridge seem contemporary, allegorical, and metafictional all at once. Some have compared the poem’s stage motif to a Greek auditorium lecture, while others have interpreted it as a retelling of Adam and Eve. One reader even noted its resemblance to vampire literature, which is not an unwarranted claim. The poem lends itself to manifold readings, and given how much the culture of antiquity informs contemporary writing, it is probably not a stretch to interpret the piece so diversely.

Certainly the poem is difficult. Lines such as, “This pain is like the clock that is heard/ every time you pay attention to it” tempt the reader to parse their significance, often unfruitfully. At sixty pages, such a medley of meanings is difficult to grasp in one sitting.

Yet, after the first twenty pages or so, the poem begins to resemble a story, allowing the reader enough detail and conflict to care about its main characters. While the circumstances of the main character’s immurement are unclear, one begins to empathize with him and long for his final escape.

Although the book cover labels the poem “postmodern,” it seems more firmly rooted in the Modernist tradition of Woolf, and certainly Eliot and Joyce. The narrative's fractured chronology, combined with the alternating points of view, call to mind the “Wandering Rocks” episode of Ulysses. Likewise, Lyacos’s ruined setting, deliberately or not, recalls the skeletal crags of The Waste Land. Finally, the appearance of shades and torture, recurrent guilt, and the enduring pain of loss undoubtedly conjure up Dante.

Of course, there are postmodern elements, from the banter of television, interrupted conversations, and a mocking of universal ethics. But, if the postmodernists celebrated a departure from objective truths, Lyacos offers a vision of subjective return. Though his view is more pragmatic than ideal, Lyacos argues for a new interpretation of God, the Bible, and their roles in contemporary society:

For they that are coming

declare plainly that they seek a country.

and truly if they had been mindful

from whence they came out,

but now they desire a better country,

wherefore God is not ashamed

to be called their God;

for he hath prepared for them a city.

Reading postmodernists such as Pynchon and Borges was, at one point, exhilarating. Playful with language, yet darkly funny and satirical, they offered a sense of unease and world-weariness in a way that mocked sentiment. But to improve the human condition, things such as unrequited love, imprisonment, and the nostalgic pull of loss must be communicated earnestly. Mocking them only dehumanizes our most fundamental hopes and beliefs.

In the end, categorizing With the people from the bridge seems somewhat beside the point. From the poem’s decrepit setting comes a narrative that purposefully resists classification, if only to offer the reader a truth both pragmatic and optimistic. Those willing to grapple with Lyacos’s verse will find themselves both frustrated and touched; perhaps both. Indeed, that ambivalence is precisely the point, as Virginia Woolf long ago said.