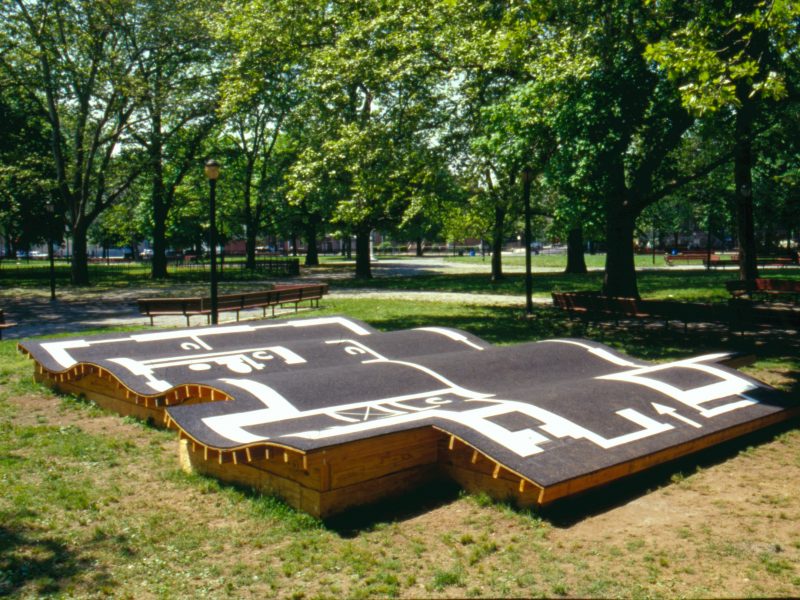 Phillip Barcio reviews About Face, a new exhibition of queer art that, by acknowledging and respecting otherness, invites us to bridge differences.

Phillip Barcio details how the media falsely labeled Michael Rakowitz as the 2019 Whitney Biennial protester, then created the conditions they described.

As critics of contemporary fiction, drama, and the arts know full well, finding the narrative in a work can often be an elusive search. Characters appear and disappear, images surface and dissolve, and the story lurches forwards and backwards, pushing and pulling the reader, the viewer, and the audience in disparate directions. What does it all mean? we ask. Where are we going?

“I Still Can’t Breathe”: Artists Decry Racism from the Watts Rebellion to the Present

A new exhibit speaks to America’s enduring legacy of state violence against African Americans and the revolutionary power of visual art.

These restaurants and cultural centers are important sites for artistic expression, providing artists additional opportunities to disseminate their works and to gain more exposure beyond the traditional avenues of commercial galleries and museums.

To Deserve Such Pain

During his lifetime, Leonid Tsypkin, who survived Hitler and Stalin only to face the sterility to post-war Soviet life, was forced to write “for the drawer.” Discovered by today’s audience, his style, which blurs the background while simultaneously capturing the specific, has special resonance in an age of near-total surveillance.

Worship should astonish us. That’s why Judson Memorial Church invited a performance artist to play the part of Jesus on Easter Sunday—in the nude.

The Late Great Mosque of Córdoba: When Islam and the West Were One

Muslim prayer may be forbidden at Córdoba’s Great Mosque, but the guards there can’t keep visitors from spiritual revelations about Spain’s Muslim past.

Art and Science: A Marriage Made in Heaven?

At the turn of the past century, Vienna—even more than Berlin, Paris, or London—stood out as the European city most friendly to radical innovation of every kind. Helping us to understand this era, which introduced the modern world that we inhabit today, is Eric Kandel’s book, The Age of Insight. Neuroscience, Kandel argues, can help to close the traditional gap between scientific and nonscientific forms of inquiry.

In 2012, the gap between the rhetoric of inclusion and the reality of exclusion remains huge. Renée Ater’s new book, Remaking Race and History: The Sculpture of Meta Warrick Fuller, goes a long way in correcting the glaring omission of one of the key African-American woman artists of the twentieth century. Learn how Meta Fuller went from making her art in the evenings after finishing her domestic chores to creating one of the most remarkable Pan-African artworks of that era.

The number of contemporary American Jewish political artists is enormous — and growing in the early years of the twenty-first century. These creative visual artists follow in the paths of their distinguished Social Realist predecessors by inviting, even compelling, audiences to reflect on such problems as global warming and environmental degradation, continuing manifestations of racism, sexism, and homophobia, seemingly intractable global warfare and American military adventurism, domestic poverty, economic injustice, excessive incarceration, and scores of others.

Visionary Art: A Traveler in the Torah

A review of BETWEEN HEAVEN AND EARTH: AN ILLUMINATED TORAH COMMENTARY by Ilene Winn-Lederer.

Our online gallery has already hosted forty-five exhibits from a remarkable range of artists, from prehistoric to postmodern, photography to drawing, graffiti to fine painting. Every exhibit is accompanied by a feature article inspired by an interview with the artist. Check out this provocative, innovative, moving, and beautiful art!