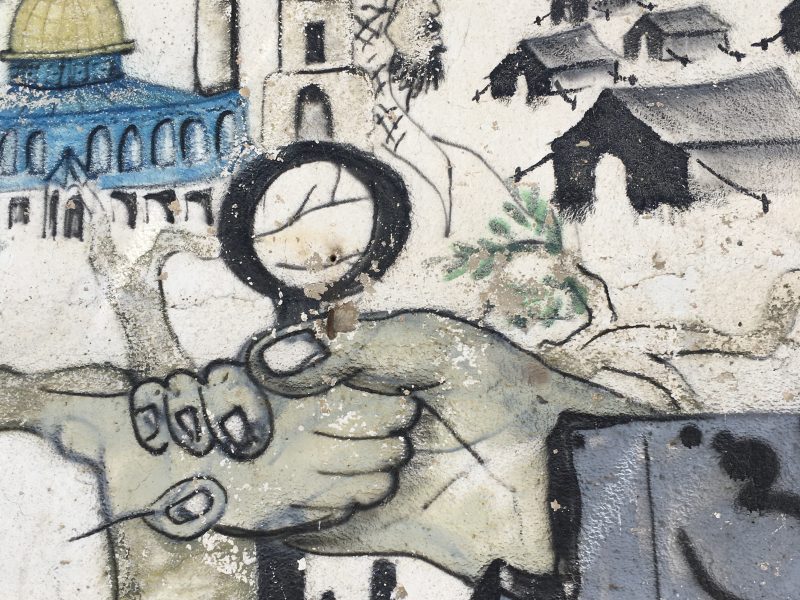 The creation of, Seeing through the Wall, a documentary; American Jews visit the occupied territories.

Jewish Renewal, a new movement that emerged in the last decades of the 20th  century, has become one of the most significant developments in Judaism in the lives of thousands of American and Israeli Jews. Sometimes described as neo-Hasidism by its proponents, and New Age Judaism by its detractors, this movement has produced a fusion of spiritual intensity in its prayers, astounding creativity in its theology, and a joyous renewal of the love-oriented aspects of Judaism.  It refuses to let Holocaust grief, patriarchal or homophobic practices, or Zionist loyalty define what 21st century Judaism will be about. Its most significant well-known expositors are Zalman Schachter-Shalomi, Judith Plaskow, Marcia Prager,  Michael Lerner, Arthur Waskow, Shefa Gold, Tirzah Firestone, Burt Jacobson, David A. Cooper, Yitz & Shonna Husband-Hankins, Shaya Isenberg Bahira Sugarman, Simcha Rafael, Jeff Roth, David Seidenberg, Or Rose, Arthur Green, Shawn Zevit, David Ingber,  Phyllis Ocean Berman, Daniel Siegel, and Elliot Ginsburg. Into this boiling over of creativity we can now add Sheila Peltz Weinberg and Rachel Werczberger.

A NOTE ON LETTERS TO THE EDITOR

We welcome your responses to our articles. Send letters to the editor to letters@tikkun.org. Please remember, however, not to attribute to Tikkun views other than those expressed in our editorials. We email, post, and print many articles with which we have strong disagreements because that is what makes Tikkun a location for a true diversity of ideas. Tikkun reserves the right to edit your letters to fit available space in the magazine.

Gift
Here’s something I
have two of, someone

said, which meant
much, and then

someone without
a word handed

me the one
thing she had—

and I could
barely, in my one

Bible Study
How does a five-
year-old learn

to play dead? Under what

sun can she
unlearn it? The text above was just an excerpt. The web versions of our print articles are now hosted by Duke University Press, Tikkun’s publisher.

Repentance, for all faiths or none: a High Holiday exercise

IT’s 2004 AND, despite my best intentions, I’m a pop-culture junkie. While my one-year-old daughter is napping, I watch an episode of a new reality TV show, The Apprentice, hosted by New York real estate mogul, Donald Trump. The show’s premise: Sixteen to eighteen individuals, divided into two teams, test their business acumen by competing in a series of moneymaking challenges. At the end of each episode, Trump calls the losing team into an ersatz boardroom where he delivers his signature tag line, “You’re Fired!” to the individual he determines most guilty of gumming up the works. I remember noting what seemed to me an unprecedented televised celebration of US capitalism with its corresponding culture of authoritarianism and non-empathy.

Human Rights on the Mountain of God

FEW WOULD TAKE ISSUE today with the claim that religious Zionism is the most particularistic and self-centered of contemporary Jewish identities. While many streams of Judaism and Zionism place the well-being of humanity at the center of their world view, mainstream religious Zionism seems only concerned with Jews. This trend is most painfully apparent in Israel’s religious Zionist political party, “The Jewish Home” whose flagship projects consist of Jewish domination of Arabs (including spearheading brutal discrimination on the West Bank), Orthodox domination of Israeli society, and shifting Israeli public school curriculums away from democracy and towards Jewish particularism. For some of its most prominent Knesset members, the “Jewish Home” is also virulently homophobic. Clearly, something has gone very wrong in the place where Jewish religion and nationality meet.

If you want to taste some of the diversity and complexity in Jewish thought, these four books offer a wonderful way in. Pulitzer Prize winning novelist Geraldine Brooks brings the reader into the mind of Natan, one of Judaism’s earliest prophets, as he tries to make sense of his own life as a collaborator and spiritual guide to a murderous King David who managed to conquer and then create Jerusalem as the Jewish people’s fantasized “eternal capital.” Unlike many of the prophets who eventually had a book written by or about them in the Bible, Natan shows up only in the stories about King David, most significantly when he challenges David for having stolen Batsheva by sending her husband, a commander in David’s army, to a mission designed to be certain death. This was the classic moment of speaking truth to power at the risk of having that power also kill the truth-teller. Building on the Bible, but with her own imaginative creativity, Brooks brings us to the midst of the intrigues that is said to be the family of a future messiah. Eleven hundred years later a similar courage contributed to making Rabbi Akiva, one of the most important figures in the Talmud, a folk hero because of his refusal to abandon the practice and teaching of Judaism commanded by the Roman occupiers of Judea.

A NOTE ON LETTERS TO THE EDITOR
We welcome your responses to our articles. Send letters to the editor toletters@tikkun.org. Please remember, however, not to attribute to Tikkun views other than those expressed in our editorials. We email, post, and print many articles with which we have strong disagreements because that is what makes Tikkun a location for a true diversity of ideas. Tikkun reserves the right to edit your letters to fit available space in the magazine.

The Journey of Adrienne Rich

The richness of Adrienne Rich’s Poetry — a paen

Luther against the Jews

500 years ago, Luther incited hatred of Jews; it has long persisted

Muslims can, must counter Islamic Extremism

“I Feel Jewish Because….”: Roots and Reflections in Amy Kurzweil’s Flying Couch: A Graphic Memoir