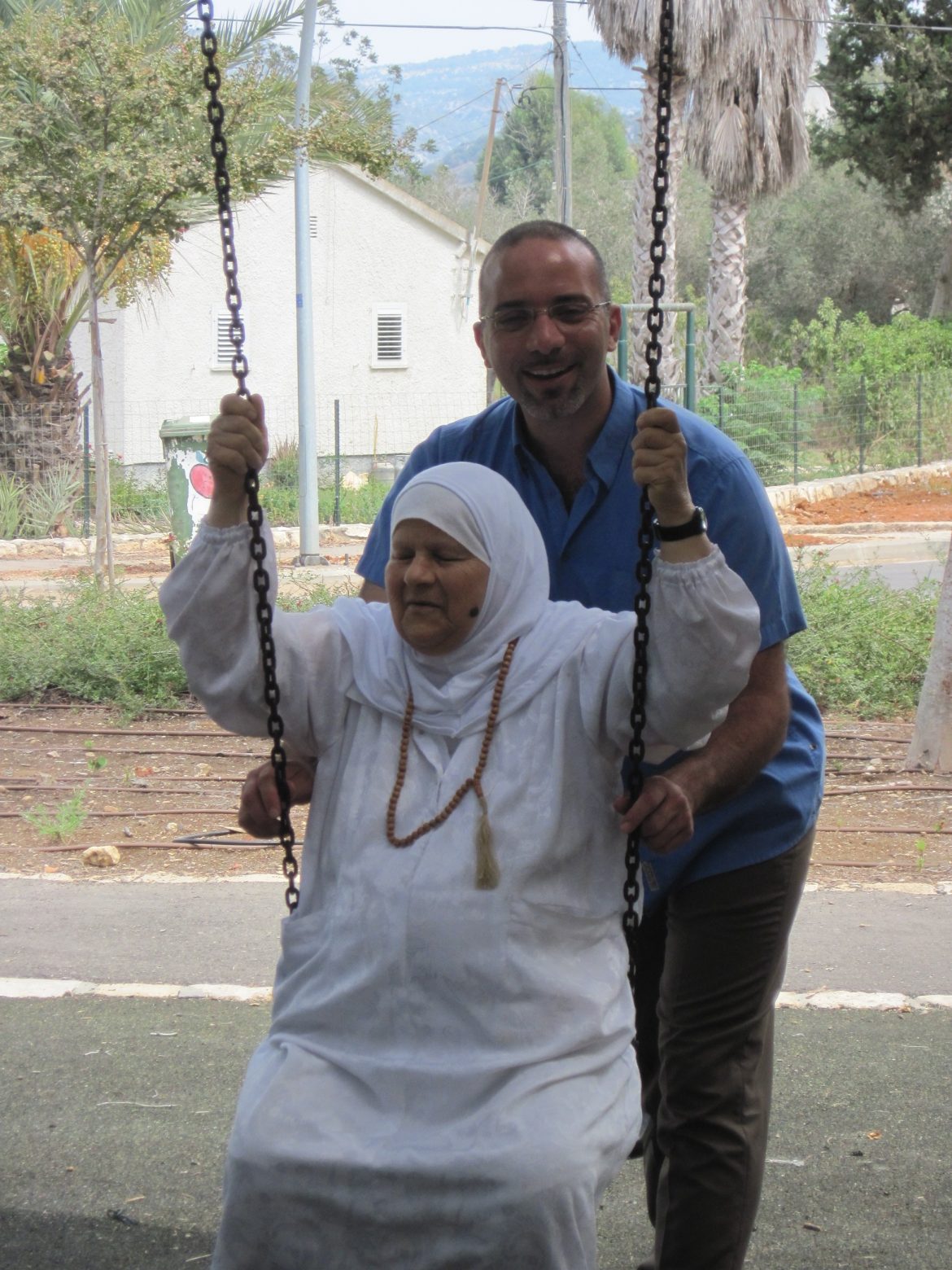 The author pushing his grandmother in a swing erected in the depopulated village of Ijzem at the foothills of the Carmel Mountains (now Kerem Mahral), three months prior to her death in 2010. Photo by: Helene Furani.

Reading about Martin Buber,[1] I find myself imagining that he and my grandmother would have made good conversation partners. She was born in a cave in Wadi Siyyah, south of Haifa, in the 1930s. From the age of six, she was responsible for milking the family cows every morning and never learned to read or write, but her father taught her to memorize the Quran. While illiterate, my grandmother was profoundly versed in the land’s ancient ways. Her gentle wisdom helped us “feel” the prophets of bygone days walking among us. She taught us to laugh in the face of poverty and adversity and how to spot just the right Carob trees of the Carmel Mountain for making a sweet syrup from their fruit.

When I say “grandmother” (in my urban demotic Arabic, taita, and I am mindful that Buber was himself raised by his grandmother), I do not simply mean the person, el-Hajjeh Khadijah Ya‘aqub ‘Abbas. I also mean the world to which she belonged and which she brought to us. Her world of interdependent porous selves was not bound by the spell of modern illusions that normalize immured autonomous lives. Not yet. Her world, and more precisely her homeland, often recalls for me an embodiment, albeit flawed and fractured, of basic tenets in Buber’s philosophy of dialogue. It is as if her deeds found an intellectual form in his words, as if her life’s formations were a living out of his formulations.

And that was the world, now vanquished, of a homeland called Palestine with its rich tapestry of peoples and religions, before nationalism, before Zionist colonization and the establishment of its state. I thus wonder if Buber’s prophetic vision sought to call forth the ecumenical prophetic landscape my grandmother and her generation were among the last to inhabit.

That landscape was a way of inhabiting space and time with basic human decency built on recognizing the other and, more specifically, the other’s fragility as something intrinsic to being human. Within a sovereignty-saturated world, such recognition has become elusive. The state, the nation, ethnic affiliation, and perhaps a certain sense of oneself obstruct recognition of an inherent frailty that makes us who we are. Day in and day out, for quite some time, layers of arrogant sovereignty (the state’s, the self’s) have converged to cover up our basic frailty.

When daring to challenge this obfuscation, insisting on seeing through it, recovering sightlines of our frail humanity, I hear both my grandmother and Buber. I hear when Taita Khadijah would refer to transgressors she encountered in her life, be they in family, neighborhood, city, or nation asبيخافوش الله  (be-khafoosh Allah, having no “fear” of God in them, or as in the Rabbinic tradition, אין מורא שמיים עליהם, ain morah shamayim ‘alaiyhem, no “fear”of Heaven upon them)[2].  I hear Buber nodding, agreeing with her when observing Zionists, who may or may not “have” God, substitute the State or the Nation for the divine. About them, Buber long observed that they “would readily approve of idol worship in our homeland if only the idols bear Jewish names” for he believed that “no people on earth is sovereign, only the Spirit is” (cited in Mendes-Flohr, 2019: 130).

In that sense, I often find myself visited by the following question: Might Buber have felt, in some very basic sense, more at home in the pre-state homeland of the tapestry that Palestine was, rather than in the modern State of Israel?

And if Palestine, the lost homeland of my grandmother, could offer that sense of home for Buber and for his aspirations, then what is stopping Palestine from offering that home for similarly minded Jews and Palestinians who courageously pursue a politics of refusal? I am referring to a refusal to be numbed by a false sense and flawed delivery of safety and security in the service of “a master” that is the nation-state believing in its sovereignty, playing—rather than fearing—God.

Buber and my grandmother, as I hear them, prod us to muster courage, as deep as that mustered by Antigone facing Creon, and to remain as vigilant as possible about whom exactly to “worship”: whom to fear and not to fear.

[1] This text was originally presented at a virtual panel sponsored on 18 November 2020 by Leo Beck Institute Jerusalem titled “Martin Buber: Beyond Identities” to honor the publication of Paul Mendes-Flohr’s biography of Buber (2019) and the translation into Arabic of Buber’s book A Land of Two Peoples, edited by Mendes-Flohr

Khaled Furani is an associate professor in the department of sociology and anthropology at Tel-Aviv University. He is the author of Silencing the Sea. Secular Rhythms in Palestinian Poetry (Stanford, 2012); Redeeming Anthropology: A Theological Critique of Modern Science (Oxford University Press, 2019).