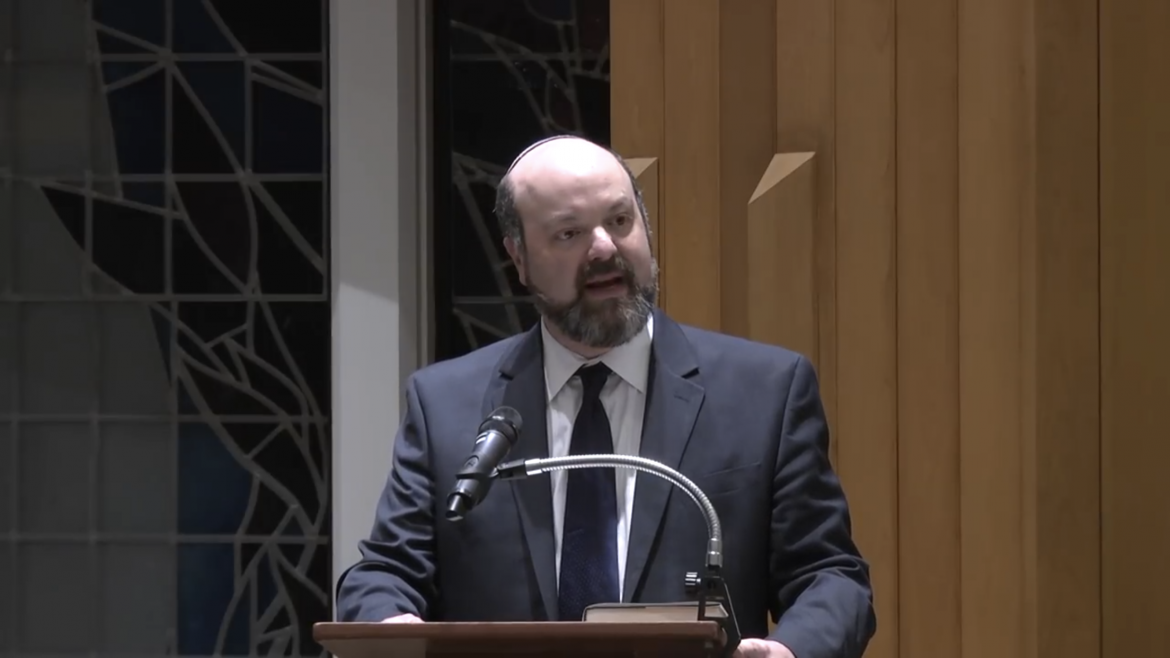 Good evening, friends. It’s very moving to me to see so many esteemed colleagues and friends here tonight to celebrate this work of many years, and I want to thank you all for taking the time to be here, as well as to all of you who are watching on the live-stream in other locations.

I am particularly grateful to my colleagues—Professors Fine, Koren, and Roskies—who so generously took the time and care to read and respond to my work; I am deeply honored and moved by your words tonight, and I offer you my most heartfelt thanks.  A big thank you as well to Professor David Kraemer, Librarian of JTS, for moderating and hosting this event, and to Mr. Hector Guzman for expertly arranging all the many logistical details for this evening. I am likewise very grateful to Rabbi Jan Uhrbach and the Block/Kolker Center for Spiritual Arts at JTS for generously co-sponsoring this event. And on a personal note, it’s a special pleasure for me to be able recognize and welcome my parents, Mona and Michael Fishbane, my brother, Elisha Russ-Fishbane, and my wife, Julia Andelman. It means a great deal to me that you are all here tonight.

It is powerful to me to mark the occasion of my book’s publication in this way, given that the birthing of this project into the world feels like a liminal moment in my career and my development as a scholar and teacher, and it’s wonderful to do this at JTS, my intellectual home now for more than twelve years. Scholarship, as so many of you know, is often a deeply solitary endeavor, so it’s a special pleasure to be able to cultivate moments of conversation about that work with fellow scholars, students, and interested readers.

In a many ways, this book has been brewing within me for most of my adult life, ever since my very first forays into the Zohar as a college student at Brandeis, at a time when I was also captivated by the presence of mystical and spiritual themes in English and American poetry. This project therefore flowed from the grounding insight that mystical speech may be characterized as a kind of metaphysical prose poetry, the attempt — like those of so many other poets — to give artistic voice to the transcendent reverberations of spiritual feeling and thinking. The Zohar, in its rich mytho-poetic speech, evokes the mysteries of Divinity with a lyric rhythm, an interpretive brilliance, and an imaginative depth unparalleled, I dare say, in all the rest of Jewish religious literature and thought. As we have already heard here tonight, those discourses of mystical theology and midrash are framed within the great story of a fictionalized Rabbi Shimon bar Yohai and his disciples on their wandering quest through a reimagined ancient Galilee.

My book seeks to zero in on this narrative dimension of the Zohar, to study this major piece of the Zohar as fiction, through the manifold lenses of literary studies. And while the poetic features of the Zohar are considered at various points in the book, I decided to make the focus of this study be the fictional, storytelling forms of the Zohar — the episodic and sometimes fragmentary way that the sojourn and quest for hidden meaning by the mystic characters is constructed and represented in the text.

Thus my work studies this masterpiece of Kabbalah through an interdisciplinary prism, through the nexus of two often separated fields of inquiry — the study of religion and the study of literature: or more specifically, the phenomenology of mysticism and narrative form-criticism. Though Kabbalah has long been seen in relation to medieval Jewish philosophy, my research has sought to recover the deep lines of connection between the Zohar and the study of Jewish literature.

In this study, I have identified several forms, structures, and techniques of zoharic fiction. First of all, I tried to develop the idea that we may characterize the Zohar as a dramatic, performative, and theatrical mode of literature; that the rhythm of fiction and the structure of the narrative revolve around an axis of esoteric drama, the representation of dynamic interpersonal relationships, especially in the theatrical process of discovering secrets and the love between friends. In this framework, I examine forms of rhetoric, dramatic voices embedded in the narrative, representations of physical gestures, and the theatrical means of monologue and dialogue in the epic — if episodic and fragmentary — story of the Zohar. These monologues, which might be anachronistically compared to Shakespearean soliloquy, are the literary technique by which the feelings and inner thoughts of a character are revealed, without recourse to use of an omniscient narrator. This analysis is accompanied by forays into several other aspects of the Zohar as literature, among them: the poetics of character recognition and unveiling (what Aristotle famously called “anagnorisis”); pastoral lyricism and naturalist spirituality; the dynamic relationship between hermeneutics and narrative; exemplum tales and narrative ethics; magical realism and the fantastic; and the situation of the zoharic story in the Jewish and Christian context of its time and place.

Let me conclude by reading a passage from the book so that you can get a further flavor for its texture:

1. Shimon, R. Elazar, R. Abba, and
2. Yosi were sitting one day under
the trees in the plain facing the Sea
of Ginosar.

1. Shimon said: “How lovely is this
shade that is spread over us from the
trees! We must crown this place with
words of Torah!”

As we find in a great many zoharic passages, the fellowship and mystical study of R. Shimon and his disciples is located out of doors. In most of these cases, the homiletical speech happens along the road—capturing a sense of movement that is the stimulus and context for kabbalistic learning. In the opening of this textual unit, the mood is one of pause and stillness: there is a sense of rest and leisure to the scene; sitting as a group is the dramatic prelude to an exposition of kabbalistic teaching. We encounter a narrative that lingers on the pastoral experience of the companions—one that is a source of clear delight and pleasure. R. Shimon’s exclamation about the loveliness of the shade celebrates the beauty and sensuousness of the location, and he responds to that pleasure with the impulse to “crown [the] place with words of Torah.” The mystic reacts to an experience of sensory delight with the desire to offer up kabbalistic interpretation, for that is his primary form of lyric expression in response to beauty—such creativity is the way he seeks to capture the wonder of the moment, much like the poet turns to verse. But there is something more in this impulse: there is the implied notion that the space of natural experience is sanctified through words of mystical creativity.

The moment begins in the purely physical delight of natural beauty, and the master seeks to elevate the place to an even higher plane through the crowning and adorning power of Torah. As Daniel Matt notes, this particular scene appears to be a direct rejection of the famous statement in Mishnah ʾAvot (3:7): “Rabbi Shimon says: One who is walking on the road and studying, and interrupts his study and says, ‘How beautiful is this tree! How beautiful is this ploughed field!’—Scripture considers him liable to the death penalty.” This inversion is especially striking given that the Mishnah attributes this teaching to Rabbi Shimon! In this way, the paradigmatic Rabbi Shimon of the Zohar critiques and inverts the voice of R. Shimon from the actual tannaitic tradition, replacing it with the authoritative “mishnaic” voice of medieval pseudepigraphy. It is a remarkable and rare instance of the Zohar revising the words of the canonical R. Shimon from the Mishnah with its new replacement voice for R. Shimon. In direct contrast to that tannaitic assertion about nature as a dreadful distraction from the real work of Torah study, the pseudo-tannaitic mystics of the Zohar reframe nature as an integrated dimension of deep learning; the way to authentic Torah study is not avoidance of nature, but direct and intentional engagement with it. Not around, but through the natural. This distinction underscores the defining symbolic hermeneutic of Kabbalah in general, and of the Zohar in particular: all of mundane reality reflects the upper divine paradigm; the world is truly an allusion to the mysteries of the metaphysical realm.

Thank you again for this moving engagement with my work, and thank you all for coming tonight.