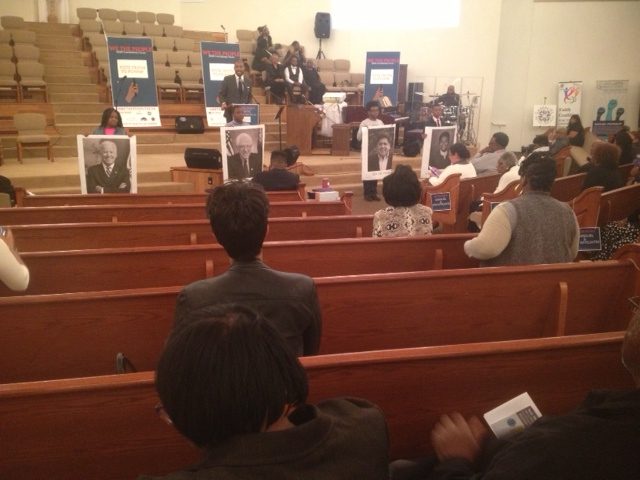 Yes. I am an angry black woman. I own it. Do not fall into the trap of thinking that I am some insane hysterical female or stereotypical Sapphire scold. Making female anger a negative thing is just another way of trying to take away a woman's power. It is another way to silence women. Let us consider the etymology of the English word anger. It derives from the Old Norse adjective ongrfullr meaning “sorrowful” and Middle English angerful meaning “anxious, eager.” (etymonline.com) I look at the conditions around me, and I am sorrowful. I am also eager and anxious for change. Think of my anger as a righteous indignation, a righteous discontent.

At this moment, I am angry with both Joe Biden and Bernie Sanders. I am angry because they both were invited to a We the People Candidate’s Forum on March 8 in East St. Louis, Illinois, sponsored by the United Congregations of Metro-East along with Gamaliel of Illinois-Iowa, Gamaliel Metro Chicago, Faith Coalition for the Common Good, Quad Cities Interfaith, Metropolitan Congregations United, and Johnson County Interfaith Coalition. These groups are faith-based grass-roots organizations from across the state of Illinois working for social justice.

The organizers set the date for March 8 because they knew that the candidates would probably come to the St. Louis area in advance of the Missouri primary that was held on March 10. The Illinois primary is March 17. The organizers were right, both candidates came to the St. Louis area, but not on Sunday. Biden was in the area on Saturday and Sanders was in St. Louis on Monday. I am angry because both campaigns were unresponsive and dismissive for weeks as we were planning our event.

I want to give gratitude and proper respect to the campaigns who did respond and who were willing to work with us – the Klobuchar, Steyer, and Warren campaigns.

We tried for weeks, since before the Iowa caucus, to get an answer from Biden and Sanders. They basically ignored us. When we asked for a high pro-file surrogate to come, we still got nothing from Sanders while Biden offered to ask a local state representative to come.

East St. Louis is a small low-wealth predominately African-American city. We are facing a number of serious problems. The median household income is $23 thousand. About 38 percent of our people live in poverty. (United States Census QuickFacts) And with poverty comes violence. East St. Louis is one of the most violent cities of its size in the United States.

Beyond that, our streets are full of potholes to the extent that driving is difficult, and buildings in what once was a vibrant business district are empty and crumbling. They are zombie buildings, dead but not gone. I am angry that the problem of infrastructure repair, urban revitalization and poverty and violence have received precious little attention in the presidential debates or in our public conversation.

I am angry with the far too much attention that our political process gives to Iowa. Presidential campaign season is a two-year slog. This would be understandable if candidates spent a year traveling the length and breadth of the United States to see the various problems that American citizens face. However, this is not the case.

Candidates spend a year living in Iowa with side trips to New Hampshire or Nevada or South Carolina, or to California to raise money. Meanwhile, cities such as East St. Louis do not see a presidential candidate and the candidates do not see us. I say to Biden and Sanders: come and see what I see on a daily basis.

Rev. Dr. Starsky Wilson, president and CEO of the Deaconess Foundation in St. Louis, Missouri and moderator of the candidate’s forum asked the question: “What About U.?” This is a question that the residents of East St. Louis will continue to ask. Over and over and over. . .

The CNN debate held on Sunday, March 15, did not address the issues on the people’s agenda. It did not address the questions that Rev. William Barber of Repairers of the Breach and co-chair of the Poor People’s Campaign proposed, questions that would require the candidates to explain policy positions that would solve problems associated with poverty and low-wealth. However, even Barber’s questions did not include the issue of infrastructure repair and the revitalization of low-wealth cities. (https://www.youtube.com/watch?v=eyf6OWdvycg)

Before the debate, I watched a segment of 60 Minutes that reported on the children in Flint, Michigan who still suffer from developmental issues because of the increased levels of lead that were found in Flint’s drinking water five years ago. Since then, people are still lining up at a local church for weekly rations of bottled water. All the old contaminated pipes have still not been replaced. People are still cooking and bathing their children in bottled water. People do not trust their governmental officials who tell them that the water is safe. This makes me angry. (https://www.cbsnews.com/news/flint-water-crisis-effect-on-children-60-minutes-2020-03-15/)

A good portion of the debate was dedicated to the current coronavirus pandemic. Is it not ungracious of me to be angry with political leaders who want to do better than President Trump in containing the virus? Ought I practice the womanist virtue of unctuousness, pouring out the oil of gentleness, compassion and pity and understanding as the nation meets an enemy it cannot see, an enemy that has changed how we live our lives, at least for the time being?

I say: No! I can be compassionate and concerned about the virus and at the same time still be angry that politicians and the political discourse is refusing to see low-wealth cities such as East St. Louis and Flint and Newark, New Jersey whose water is also contaminated with lead. It is intellectually lazy to think that an angry black woman such as myself is one dimensional. It is intellectually lazy to think that all I am is walking rage in flesh and blood. My heart is large enough to contain all the emotions of which the human heart is capable, especially love.

It is my love that fuels my anger. Love is not indifferent to the least among us. Love does not fear.

Yes. I am an angry black woman, and I am not hysterical crazy. When faced with the realities of life in a low-wealth and violent city in America, it is crazy NOT to be angry.