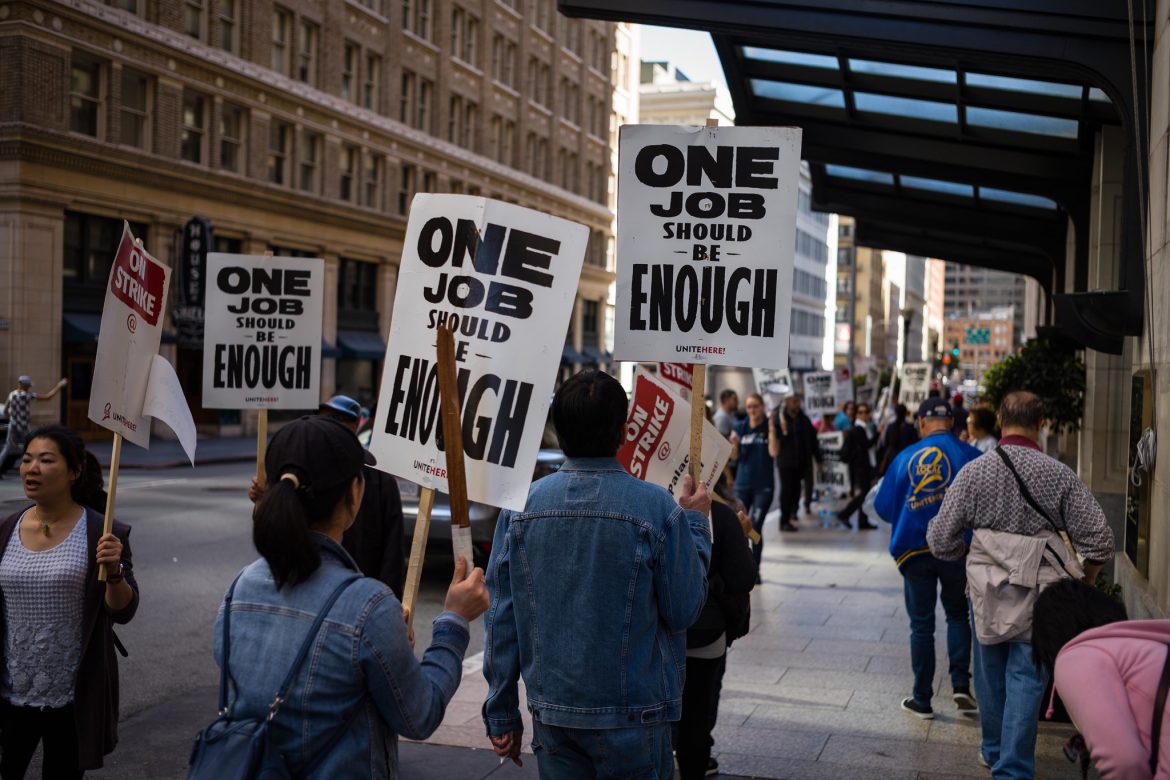 In this season of commemorating the Exodus, the first general strike in recorded history, let us praise the return of the strike weapon to the American political landscape.

Workers in 2019 are showing greater readiness to flex the strike muscle. Just look at the 31,000 Stop and Shop supermarket workers in southern New England, who struck for 11 days and beat back company demands for healthcare and retirement concessions. The pickets came down Sunday night after the union announced that the company had met their demands to boost pay and preserve healthcare and pension coverage.

Earlier this year, teachers in Los Angeles and Oakland staged strikes, defending the principle of quality public education against those who would privatize and strip funding from our public schools.

That followed shortly on the heels of last fall’s eight-city walkout, from Oahu to Boston, led by 7,000 Marriott hotel and restaurant workers.

This latest strike wave commenced just over a year ago, when the #55Strong educators in West Virginia defied the law, walked out demanding proper funding for schools and for all public workers, occupied the state capitol, and forced concessions from political elites. The West Virginia teachers inspired similar strikes in Kentucky, Oklahoma, Colorado, and Arizona.

Indeed, last year saw the largest number of major strikes in the US since 1986 – not nearly the level of walkouts of the 1970s and earlier, but a welcome generational return to labor militancy following the union-busting unleashed in 1981 when President Reagan famously broke the air traffic controllers strike by firing 11,000 workers.

The Stop and Shop strike crested just as Jewish people around the world began celebrating the historic strike that defines us as a people: Exodus.

At Seder tables around the world, this past week we’ve been recounting how our ancestors walked out of slavery in Egypt and began the long 40-year march to freedom.

Most Passover Haggadot inspire us with Moses’ stirring call to Pharaoh to “Let my people go!” But that’s not the way things went down, according to our own Torah.

When Moses and Aaron first go to Pharaoh, they demand not an end to the Hebrews’ enslavement, but merely a weekend off: “Let us go, we pray thee, three days’ journey into the wilderness, and sacrifice unto the Lord…” [Exodus 5:3]

Pharaoh refuses, of course, and what follows is the first plague – the Nile turning to blood – followed by more rounds of negotiations and escalating plagues, until the 10th and final plague and the slave walkout. Modern-day organizers will recognize the cycles of bargaining followed by pressure action as a classic union escalation strategy.

In hindsight, some might argue that Pharaoh made a stupid choice – had he given the slaves their initial demand of three days off, perhaps he would have preempted the wholesale rebellion.

I suspect, however, that Pharaoh refused because he understood that agreeing to a holiday weekend for the slaves would be perceived as a concession of power and would only whet their appetites for more. So he held firm.

It’s really no different from the calculus of our latter-day Pharaohs. The Dutch parent company of Stop and Shop took in $70 billion last year and reaped net profits of more than $2 billion. The workers’ bargaining demands would barely have nicked the company’s bottom line. And yet the company obstinately provoked a walkout, costing them, by their own estimates, about $10 million for every strike day.

The Marriott workers fighting for basic living wages are employed by a CEO who pays himself $6,400/hour and whose company made nearly $2 billion in profits last year.

The West Virginia educators struck against their deadbeat billionaire governor, whose main political credential has been to protect oil and gas corporations from having to pay their fair share in taxes.

These brave workers – and also their adversaries – recognize the same thing that the Hebrew slaves and Pharaoh did thousands of years ago: The strike is not just about specific demands, but more profoundly it’s a call to reorder the distribution of societal power; it’s about workers’ social and economic liberation. That’s why strikes are so threatening, both to the Pharaohs of the Torah, and of today.

Today we live in a new Gilded Age, where billionaires reap staggering profits while nearly 80 percent of full-time workers are living paycheck-to-paycheck, one job loss or health emergency away from full-blown financial crisis.

In my hometown of Seattle, as Amazon has inexorably expanded its headquarters footprint, executives have dreamt up an eye-popping crystalline biosphere – three enormous interlocking glass globes that today house 40,000 trees and plants from more than 50 different countries. Modern-day pyramids, the Amazon Spheres stand as a totem of the priorities of the billionaire class – stunning, elegant, temperature-controlled palaces for plants while nearby thousands of people shiver under makeshift plastic and canvass tents and record numbers of people die on our streets. This is the priority-setting of the sick, immoral Pharaohs of our time.

The Stop and Shop workers have won specific demands in the new collective bargaining agreement – secure benefits and better pay. But they and the other contemporary strikers are waging a battle that is about more than what you can read on a paystub. They are lashing out against our modern-day Mitzrayim, the obscenity of 21st Century capitalism. They are reclaiming power by demonstrating that you can take on Pharaoh. In doing so, they are showing all of us the path to our own liberation.

Jonathan Rosenblum is a community organizer for Seattle City Councilmember Kshama Sawant and a leader in Kadima Jewish Community. He is the author of Beyond $15: Immigrant Workers, Faith Activists and the Revival of the Labor Movement (Beacon Press, 2017) and is a member of UAW 1981/National Writers Union. Jonathan was campaign director for the SeaTac Airport workers’ Fight for $15 campaign.

One thought on “Worker strikes as liberation — way back then, and today”