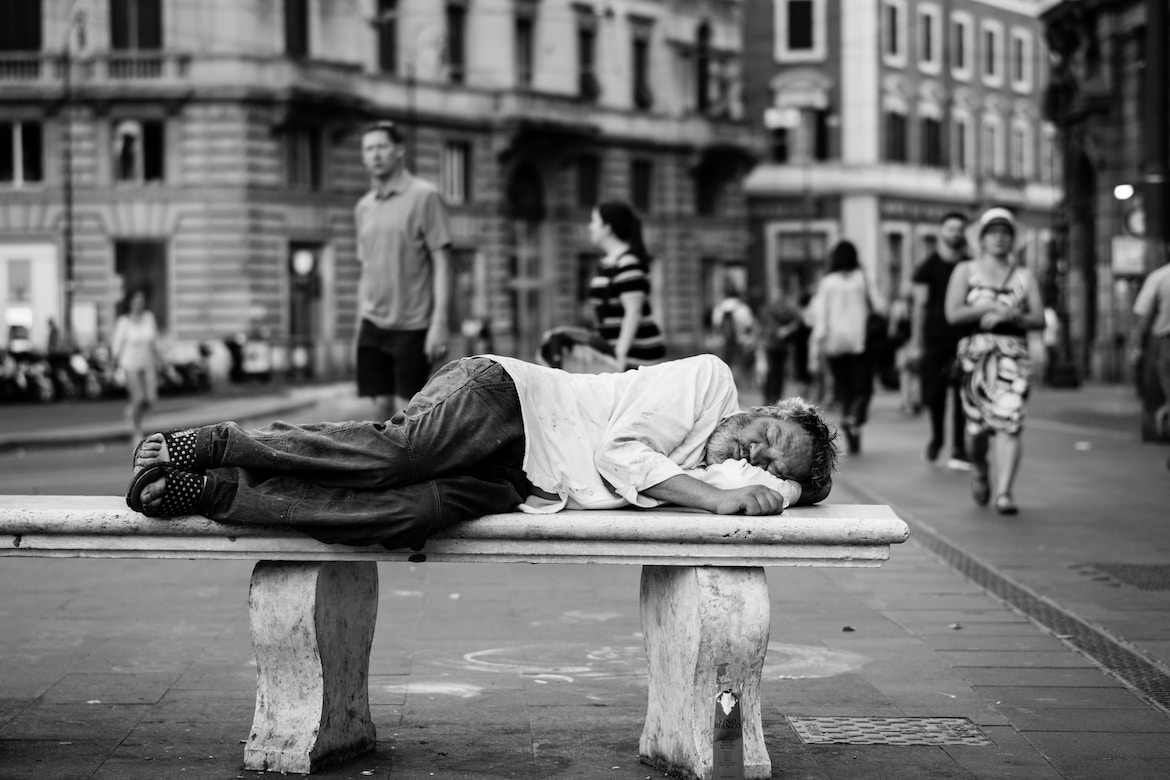 The rigid texture of fiberglass is not what I'd want for a bed but on it prone forms of this morning's Brooklyn, New York subway men lie still as if cotton-cradled. Swarthy hands grasp silver rails, fetal positions fend off a callous world's vacant or derisive stares. As God's grace sends cops elsewhere these men have fleeting sleep.

But what should I have done if police officers had entered the car and forced the men awake? The rational mind defaults to “nothing,” as I lack contacts or authority. The high-level executives I once knew at One Police Plaza have all by now retired. The patrol officers may arrest or worse ignore me. Yet  the heart says “lie down!” Align with the outcast. Dispel the learned impotence that aids oppression.

“Blessed are the merciful,” Christ’s Sermon on the Mount makes clear: “let your light shine before men so that they may see your good works and glorify your Father who art in heaven.” I don’t attend church or envision an “on high” Supreme Being. A convert to Judaism in middle age still active in a synagogue’s social action committee, I envision God as a holistic, immersive, supernatural force that summons our best selves into being; I fancy scaling cumulus clouds’ gilt edges to perceive God’s glory in crystal blue skies on sunlit days. To comprehend what God wants of us concerns me.

“If I had to face only the Sermon on the Mount and my interpretation of it, I must then say, “Oh yes, I am a Christian,” Gandhi exclaimed. A communal spirit pervades all faiths, Islam’s alms and fasting are akin to Judaism’s Tikkun Olam (mend the world) and Tzedakah (the moral obligation of charity). The self and the rest of the universe are not separate entities, but one functioning whole, a Zen precept teaches.

Those close to me fear that unknown troubles would result, were I to lie down on the F line.  My concern is that to do nothing would negate my moral core. Would my action prod others to act? Does that even matter if to go prone is the right thing to do? Would my doing so at all help those whom the Mayor’s hostile order targets?

“Our problem is that people are obedient all over the world in the face of poverty, starvation, stupidity, cruelty, war,” historian Howard Zinn in 1970 told a Johns Hopkins University crowd in Baltimore. The present affirms his past premise.

2,400 people sleep in streets or subways nightly, the Bowery Mission says. It adds that eviction, inadequate affordable housing, job loss and domestic violence have made one of every 106 New Yorkers homeless, in all 80,000.  As I see this pair I wonder what to do. With others I’ve shared cash, hugs, the address of the soup kitchen where I serve and sweep each Monday, and invited a verbal catharsis. A former gang member's intricate facial tattoos, the blade thin frame of a woman’s grateful for kindness embrace, the plaintive cry of a teary ex-Rikers Island inmate who sought “just a slice and a soda” are indelible memories.

The man who cried “I could kill you” to test how I’d react, another who reclined like a tented king against scalding summer sun (and sought my all day errand aid once I’d fetched a distant deli’s six plastic sacks of ice), and the Boston sidewalk man to whom I gave enough to secure his July evening’s rental room to free him from the heat all populate my mind.

Soup kitchen guests are deeply grateful for what we cook and serve – “You’re a free person, close to God” one claims; much unearned praise accrues.

An old man of modest means, I live lacking platforms of my career roles in politics and teaching. The conundrum that my deeds are dust in need’s whirlwind does not let me rest. “God offers to every mind its choice between truth and repose,” 19th century abolitionist essayist Ralph Waldo Emerson wrote, “Take which you please – you can never have both.”

Mayor Eric Adams’ unique past as police captain and victim of racist “stop and frisk” police conduct positioned him for a compassionate police-community relations role. Instead he lauds the “swagger stance” that in recent past put a Federal Consent Decree for outside supervision against the impregnable Blue Wall of the NYPD. He “defended on Monday the police officers who handcuffed a woman accused of selling fruit without a license in a Brooklyn subway station, saying mango sales could pave the way for larger problems,” the May 10th New York Times reports.

Idle tears do no one good yet I weep with this news. Maria Falcon has had a mobile vendor license but cannot get a permit for her cart, the city having capped the total despite the seismic moral failure that ignores the plight of people.

“Rikers Officers Lagged in Helping 3 Men Who Died,” that page also tells me. Say their names with sorrow: Tarz Youngblood, Herman Diaz, and George Pagan should live on to have their day in court – like sixteen inmates last year plus four so far in this one.

The well-documented catastrophe at this detention facility meant for 3,000 but holding twice that in pretrial detention has had no concrete redress. An $8.7 billion five-year borough-based jails plan to make that forsaken site a relic does nothing for the dead. Live inmates sleep heads to feet on tiled floors in shower stalls, when ill or injured languish in cells without medicine or medical attention; they shield themselves with shivs.

Abroad, Russia’s scorched earth invasion -- a genocide -- decimates the infrastructure of innocence as so-called civilized nations escalate war toward unknown outcomes. Their nuclear missiles’ tips peek out from the Pandora’s Box that holds them -- as the Kings Bay Plowshares 7 whose prophetic witness warned against them end jail terms for trespass and defacing property on a nuclear sub base in Georgia.

“We’re spending more trying to blow up the world than to save the world,” Bishop William J. Barber, Co-Chair of the Poor People’s Campaign for a June 18th Mass Mobilization in Washington, asserts as Democrats and Republicans unite without debate to add $40 billion in aid for Ukraine to the $13.6 billion previously approved.

Will the primal bloodlust that bequeaths endless wars consume us? Will the outcast poor rise up against the complacency of wealth? Are we destined to live day by day until climate change in extremis arrives?

I kiss the springtime sunshine as I walk my dog today. I thrill at broadcasts of the Rangers/ hockey playoffs or recordings as The Who plays rock and roll, aware my soul is restless because someone else is homeless, ill or hungry as in the world’s richest country they must struggle to survive.

I will serve their cause as I am able at my late stage of life.

While I trust that many years await me since my Dad lived till 84 and I am 69 I honor Norman Morrison, the Quaker who in 1965 torched himself by Defense Secretary Robert McNamara’s Pentagon window to force upon him the horrors of the impersonal wartime killing the latter’s Vietnam policies enacted.

I bow in homage for LGBT rights lawyer and environmental advocate David Buckel, whose fiery death in Prospect Park at one recent dawn, he wrote, intentionally replicated the de facto suicide that scientists warn the unmet threat of climate change ensures.

Despite the abnormal circumstances, we like the band on the Titanic feign that all is well – and wrestle with our individual concerns. We could see Buckel now and Morrison before him, like the Kings Bay Plowshares 7, thankfully alive and free, as prophets. Instead, their actions are dismissed though rooted in moral integrity that we ignore or call naïve.

How can anyone connect an urgent wake-up call to insulated leaders and indifferent citizens?

“The poor tell us who we are, the prophets tell us who we could be, so we hide the poor and kill the prophets,” Phil Berrigan wrote, who with Father Dan, his brother, poured blood over Vietnam draft files in the Sixties and in the Eighties led the Plowshares 8’s pioneering action against nuclear weapons.

The Star Thrower by Loren Eiseley instructs us as a boy’s compassionate intent gently rebuffs an old cynic’s rebuke. The example shrinks issues to a manageable scale.

“You’ll never make a difference with hundreds, maybe thousands more, beyond the starfish you throwback to sea, still stranded on this beach,” the latter warns the youthful hero in the story’s central scene. “Well, I'll make a difference for this one,” the child replies, pitching one more small five-legged friend toward healing ocean waters.

The stellar works of grassroots groups stem from institutional abuse and society’s neglect but, our nation top heavy with the monstrous wealth of an isolated and selfish minority, lists like the ill-fated  Titanic. Will Bill Gates or Warren Buffet, Elon Musk, or Jeff Bezos today devote themselves to someone in distress? They leave so much for us to do.

How shall we secure abortion rights for women? Safe havens for refugees from Afghanistan and Ukraine? Voting rights for Black and Brown Americans? Safety from anti- Asian hate crimes? Our own neighbors’ human rights?

Long-term efforts grow from single steps. Let’s devote ourselves to the values we espouse with open hearts when we leave home in mornings, to heed the conscience during each work day – en route weighing whether to lie down on trains to aid those among us who must.